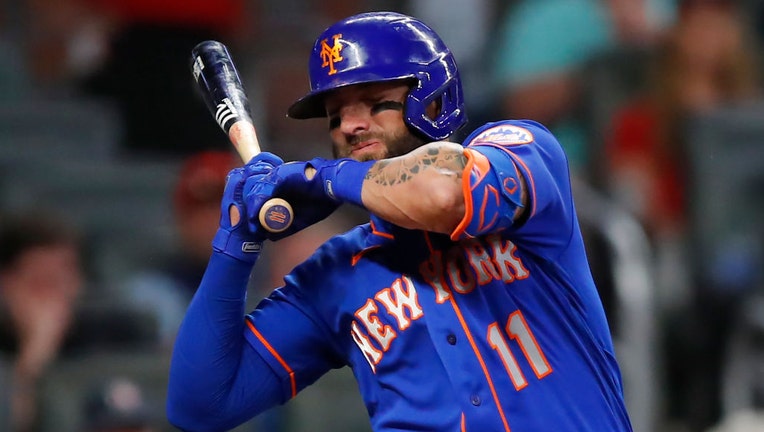 ATLANTA, GA - MAY 17: Kevin Pillar #11 of the New York Mets reacts after being hit by a pitch in the seventh inning of an MLB game against the Atlanta Braves at Truist Park on May 17, 2021 in Atlanta, Georgia. (Photo by Todd Kirkland/Getty Images)

NEW YORK - New York Mets outfielder Kevin Pillar suffered multiple nasal fractures when he was hit in the face by a fastball. The Mets say Pillar will meet with a facial specialist in Atlanta to determine the next steps.

In a frightening scene that shook both teams, Pillar was drilled square in the nose by a 95 mph pitch from Braves reliever Jacob Webb with the bases loaded in the seventh inning Monday night.

Pillar was knocked to the ground, and blood poured from his nose when he lifted his head. After the game, Mets manager Luis Rojas said the veteran outfielder was taken to the hospital for a CT scan. Pillar later provided an encouraging update on his Twitter account.

"Thanks to everyone that has reached out! Scary moment but I’m doing fine!" he posted.

Starter Taijuan Walker also was forced to leave the 3-1 win over the Braves, joining a long list of injured Mets players. Walker pitched only three innings, allowing one hit and no runs, before exiting with tightness in his left side. He was to have an MRI.

The injuries to Walker and Pillar came after the Mets added two regulars to the injured list before the game. Ace starter Jacob deGrom already is on the IL, recovering from right side tightness.

RELATED: Forbes: Yankees, Knicks, among most valuable sports teams in the world

Baseball will be in full swing at Yankee Stadium and Citi Field beginning May 19 as fully vaccinated people will be allowed to enjoy the game while those unvaccinated will be limited at 33% capacity of the stadiums.