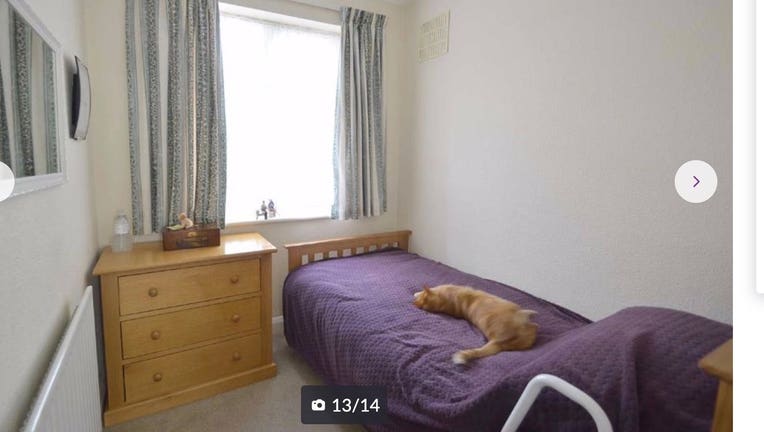 LONDON - A U.K. man was browsing an online real estate listing for his neighbor’s house when he spotted someone he recognized in one of the photos: his own cat lounging on a bed in the house.

"The neighbours just put the house up for sale. Couldn't resist checking it out on Zoopla. That's our bloody cat," Michael Hubank wrote in a post on Twitter.

He posted a photograph of his cat, Freddy, relaxing on the bed in one of the rooms of the listed property. The tweet has since garnered more than 328,000 likes.

In an email to FOX Television Stations, Hubank said he noticed that the tweet and photo of his cat cheered up a lot of people during a difficult time.

"We are still under COVID restrictions over here, but no lockdown for Freddy, apparently," he said.

Caitlyn Wertenberger’s tuxedo cat Piper had been missing for nearly a month before she was found trapped inside the neighbor's chimney, likely for several days.

Hubank explained that he brought his neighbor some flowers and was able to get Freddie back. He said someone already put an offer on the house, but the owners promised to only sell to a cat lover.

Hubank said he noticed many people, especially in the U.S., keep their cats indoors.

"I had replies from all over the world, including many from the USA. I learned that lots of people keep indoor cats in the U.S., so it must have seemed particularly strange," he said. "Here the cats roam free."