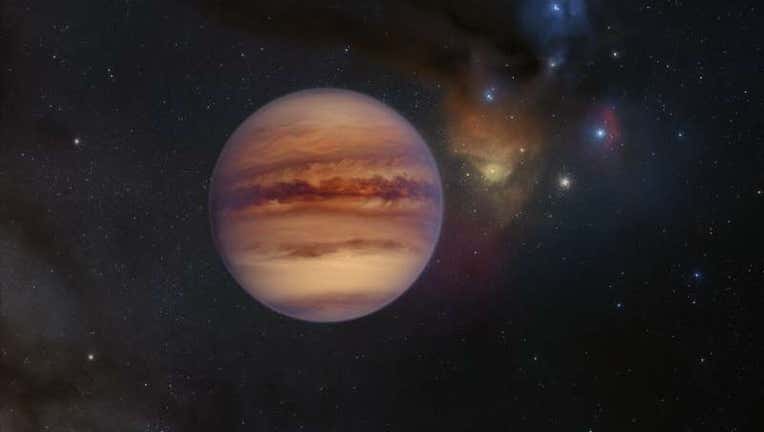 This artist’s impression shows an example of a rogue planet detected in the Rho Ophiuchi region where ESO observations have recently helped uncover at least 70 of these objects. Rogue planets have masses comparable to those of the planets in our Sola

A team of researchers has uncovered nearly 70 rogue planets in our galaxy, the largest group ever discovered, according to the European Southern Observatory.

Rogue planets are described as "elusive cosmic objects that have masses comparable to those of the planets in our Solar System but do not orbit a star, instead roaming freely on their own," according to a press release.

Scientists hope the discovery will give them more insight into understanding the origins of rogue planets. They published their finding in "Nature Astronomy."

According to the ESO, some scientists believe rogue planets can form from the collapse of a gas cloud that is too small to lead to the formation of a star, or that they could have been kicked out from their parent system.

"We did not know how many to expect and are excited to have found so many," Núria Miret-Roig, an astronomer at the Laboratoire d'Astrophysique de Bordeaux, France and the University of Vienna, Austria, said.

Miret-Roig said rogue planets are normally impossible to see. However, her team found the cosmic objects to be more visible a few million years after their formation when they are hot enough to glow. That allows them to be picked up directly by sensitive cameras on large telescopes.

To spot the massive cluster of rogue planets, the team used 20-year old data from telescopes on the ground and in space. The team used observations from ESO's Very Large Telescope (VLT), the Visible and Infrared Survey Telescope for Astronomy (VISTA), the VLT Survey Telescope (VST) and the MPG/ESO 2.2-meter telescope located in Chile, along with other facilities. The team also used data from the European Space Agency's Gaia satellite.

"We measured the tiny motions, the colors and luminosities of tens of millions of sources in a large area of the sky," Miret-Roig continued. "These measurements allowed us to securely identify the faintest objects in this region, the rogue planets."

"The vast majority of our data come from ESO observatories, which were absolutely critical for this study. Their wide field of view and unique sensitivity were keys to our success," Hervé Bouy, an astronomer at the Laboratoire d'Astrophysique de Bordeaux, France, said. "We used tens of thousands of wide-field images from ESO facilities, corresponding to hundreds of hours of observations, and literally tens of terabytes of data."

Scientists said there could be many more rogue planets yet to be discovered.

"There could be several billions of these free-floating giant planets roaming freely in the Milky Way without a host star," Bouy continued.

Scientists said further advances in technology will be key to unlocking the mystery of rogue planets, but they hope to continue to study them in great detail.