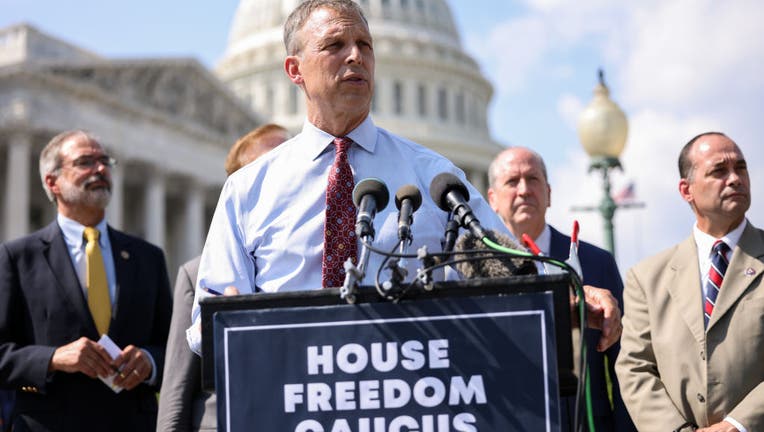 WASHINGTON, DC - AUGUST 23: U.S. Rep. Scott Perry (R-PA), joined by members of the House Freedom Caucus, speaks at a news conference on the infrastructure bill outside the Capitol Building on August 23, 2021 in Washington, DC. The group criticized th

WASHINGTON - The House panel investigating the Jan. 6 U.S. Capitol insurrection requested an interview and documents from Republican Rep. Scott Perry of Pennsylvania on Monday, marking the first time the committee publicly sought to sit down with a sitting member of Congress.

The latest request launches a new phase for the lawmakers on the committee, who have so far resisted reaching out to one of their own as they investigate the insurrection by President Donald Trump’s supporters and his efforts to overturn the election. Perry and other congressional Republicans met with Trump ahead of the attack and strategized about how they could block the results at the Jan. 6 electoral count.

In a letter to Perry, Mississippi Rep. Bennie Thompson, the Democratic chairman of the panel, said the panel had received evidence from multiple witnesses, including then-acting Attorney General Jeffrey Rosen and then-acting Deputy Attorney General Richard Donoghue, that Perry had "an important role" in efforts to install Justice Department official Jeffrey Clark as acting attorney general.

RELATED: Florida man sentenced to more than 5 years in prison for role in Capitol riot

The letter requests an interview with Perry, who pushed the Justice Department to overturn the election and met with Trump ahead of the violent attack, according to investigators. The panel also asked for any documents and correspondence between Perry and Trump, his legal team or anyone involved in the planning of Jan. 6 events.

A request for comment left with Perry's office was not immediately returned.

The lawmaker representing Pennsylvania's 10th District was cited more than 50 times in a Senate Judiciary report released in October outlining how Trump’s effort to overturn his 2020 election defeat brought the Justice Department to the brink of chaos and prompted top officials there and at the White House to threaten to resign.

Perry, who has continuously disputed the validity of President Joe Biden’s victory in Pennsylvania, has said he obliged Trump’s request for an introduction to Clark, then an assistant attorney general whom Perry knew from unrelated legislative matters. The three men went on to discuss their shared concerns about the election, Perry has said.

The Justice Department found no evidence of widespread fraud in Pennsylvania or any other state, and senior Justice officials dismissed Perry’s claims

The recent Senate report outlined a call Perry made to Donoghue last December to say the department wasn’t doing its job with respect to the elections. Perry encouraged Donoghue to elicit Clark’s help because he’s "the kind of guy who could really get in there and do something about this," the report said.

RELATED: DC to file civil lawsuit against Proud Boys, Oath Keepers and others for Capitol insurrection

Perry has previously said his "official communications" with Justice Department officials were consistent with the law.

Jacob Chansley, the so-called "QAnon Shaman" was sentenced to 41 months in prison for his role in the Jan. 6 riot at the U.S. Capitol. Federal Judge Royce Lamberth told Chansley during a sentencing hearing on Wednesday that he believed the 34-year-old was now "on the right track," but that the crime was so serious it warranted the sentence. Chansley gave a lengthy speech during the hearing, saying he was "wrong for entering the Capitol," and admitting he had no excuse. LiveNOW from FOX's Daytona Everett spoke with Fox 10 Phoenix's Irene Snyder about the sentencing. Snyder also spoke with Chansley's mother, Martha, for reaction.

The letter sent Monday night is the first time the panel has publicly released a request to a fellow member of Congress as it investigates Trump’s communications with his Republican allies. But the panel notably did not subpoena Perry, as it has other witnesses close to Trump whom lawmakers believe have relevant information.

In his letter to Perry, Thompson added that the panel "has tremendous respect for the prerogatives of Congress and the privacy of its Members. At the same time, we have a solemn responsibility to investigate fully all of these facts and circumstances."

The panel voted in November to hold Clark in contempt after he showed up for a deposition yet declined to answer questions. But Thompson has said he will hold off pursuing the charges and allow Clark to attend another deposition and try again. Clark’s lawyer has said Clark intends to assert his Fifth Amendment right not to incriminate himself, but the deposition has been repeatedly postponed as Clark has dealt with an unidentified medical condition.

The panel has already interviewed around 300 people as it seeks to create a comprehensive record of the attack and the events leading up to it.

Trump at the time was pushing false claims of widespread voter fraud and lobbying Vice President Mike Pence and Republican members of Congress to try to overturn the count at the Jan. 6 congressional certification. Election officials across the country, along with the courts, had repeatedly dismissed Trump’s claims.

An angry mob of Trump supporters were echoing his false claims as they brutally beat Capitol police and broke into the building that day, interrupting the certification of Biden’s victory.

In his request for a meeting with Perry, Thompson wrote: "We would like to meet with you soon to discuss these topics, but we also want to accommodate your schedule."