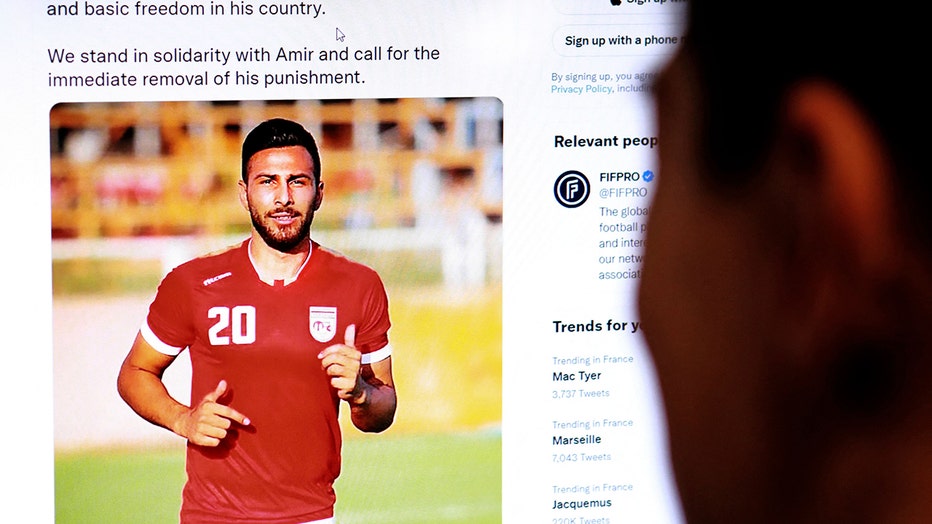 A person in the Cypriot capital Nicosia checks a tweet on December 13, 2022, by the International Federation of Professional Footballers (FIFPRO) regarding the reported risk of Iranian footballer Amir Nasr-Azadani being sentenced to death. (Photo by

NEW YORK - An Iranian soccer player will be hanged in connection to the murders of a police colonel and two volunteer militia members who were killed during the ongoing protests after the death of 22-year-old Mahsa Amini.

Amini had been detained by Iran's morality police for allegedly violating strict dress codes for women.  She allegedly was improperly wearing a hijab.  Amini died in custody.

The demonstrations started in September and rapidly spread across the country and mark one of the biggest challenges to Iran's theocracy since the 1979 revolution that brought it to power.

Soccer player Amir Nasr-Azadani, 26, was arrested in November, IranWire reported.  Witnesses said he was not at the scene were the killings took place.

Nasr-Azadani has also been accused of "waging war against God."

The International Federation of Professional Footballers (FIFPRO) said they were "shocked and sickened" by the punishment.

"FIFPRO is shocked and sickened by reports that professional footballer Amir Nasr-Azadani faces execution in Iran after campaigning for women’s rights and basic freedom in his country," the union tweeted.

"We stand in solidarity with Amir and call for the immediate removal of his punishment."