Iowa woman has brush with twister during severe storm

DES MOINES, Iowa - A night of severe and dangerous storms Wednesday spawned 12 confirmed tornadoes in Iowa and more than two dozen reports of possible twisters in the state, according to the National Weather Service.

The NWS said supercells developed over central Iowa during the afternoon on July 14. "The environment was ripe for tornadic development and rotation was evident on radar shortly after storms formed," NWS reported.

The hot spot for tornadoes occurred generally south of the Highway 20 corridor and near Nemaha, Lake City, Stanhope, Jewell and Waverly. Tornadoes were also reported around Dysart and south of Mason City.

The NWS issued tornado warnings for several cities, along with a tornado watch for most of Iowa.

Manning resident Emma Corbin got a little too close for comfort to one twister in Lake City, she said. 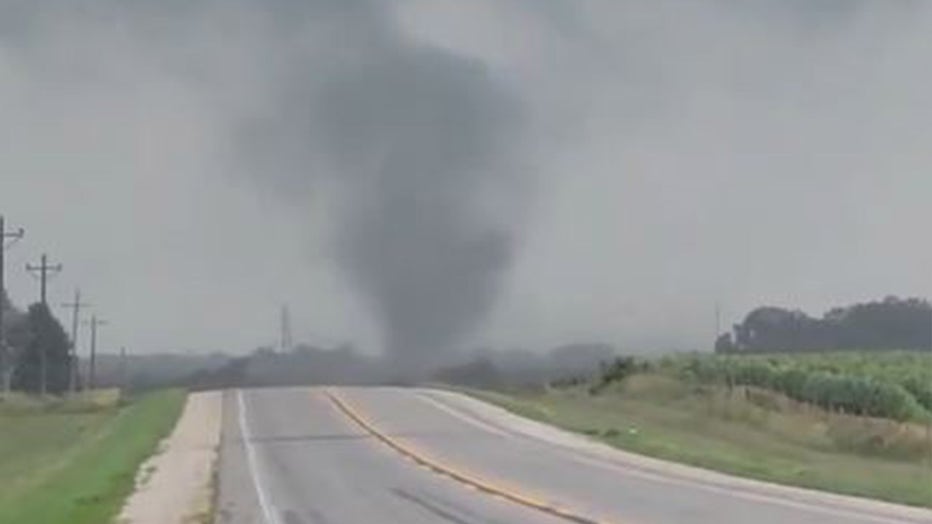 "I just drove through a frickin’ tornado," Corbin exclaimed after her close encounter. "It’s legit over the road," she said. The "wind was strong enough I had a hard time controlling my car," Corbin told FOX Television Stations.

"Crazy to think if I was just a few seconds later I would of been in the heart of the tornado and probably wouldn't of been able to control my car the way I was able to," Corbin continued.

Chris Nelson also captured video of a tornado that swept through Waverly, in east-central Iowa.

The twisters caused damage to buildings and other property. One house was "destroyed," and halved trees, flipped cars and downed power lines were seen across the region, according to local news reports.

A tornado in Waverly, Iowa caused damage to buildings and other property on July 14. (Chris Nelson via Storyful)

Meanwhile, a funnel cloud moved through Jewell, Iowa, as tornado warnings were issued across the state. A video taken by Ryan Brennan showed the funnel cloud as sirens sounded in the town.

A funnel cloud twirled near Jewell, Iowa, on July 14 as tornado warnings were issued across the state. (Credit: Ryan Brennan via Storyful)

A fast-moving funnel cloud was also seen rotating near Stanhope.

A fast-moving tornado was seen twirling near Stanhope, Iowa, as most of the state was placed under a tornado watch. (Credit: Kelly J. Wirtz via Storyful)

No deaths or injuries were reported in Wednesday’s storms.

This story was reported from Los Angeles. Storyful contributed.