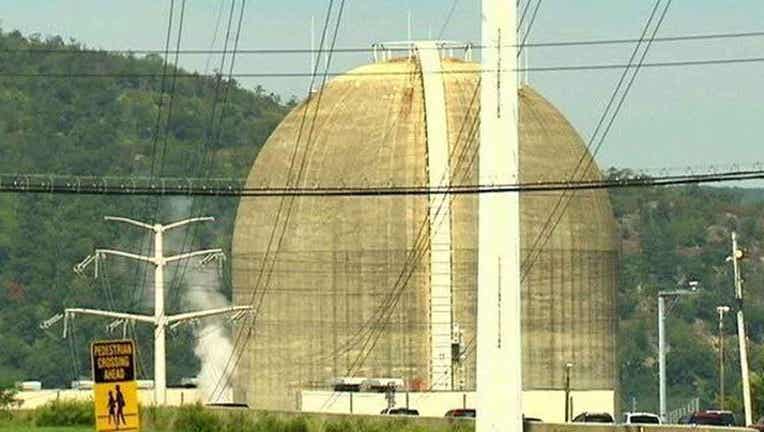 ALBANY, N.Y. (AP) - With the push of a red button, one of the two operating nuclear reactors at the Indian Point Energy Center along the Hudson River north of New York City will shut down Thursday night as federal regulators consider the plant owner's proposal to sell it to a company that plans to demolish it by the end of 2033 at a projected cost of $2.3 billion.

The 1,020-megawatt Unit 2 reactor will close for good Thursday and 1,040-megawatt Unit 3 will close in April 2021 as part of a deal reached in January 2017 between Entergy Corp., the state of New York and the environmental group Riverkeeper. The Unit 1 reactor shut down in 1974, 12 years after the plant began operation in the Westchester County town of Buchanan.

To cease energy production, control room operators will press a button that inserts equipment called control rods into the reactor adjacent to the nuclear fuel, Entergy spokesman Jerry Nappi said Tuesday. The control rods absorb neutrons, which stops the nuclear fission process. Staffing at the plant will be reduced from about 800 to 300 workers a month after Unit 3 shuts down next year, Nappi said.

"Over the last 45 years, thousands of dedicated professionals have operated Unit 2 at Indian Point, safely, securely and reliably," Chris Bakken, Entergy's chief nuclear officer, said in a statement. "We owe each of them our thanks for a job well done and for their commitment to the highest standards of professionalism."

A year ago, Entergy announced a deal to sell the 240-acre facility to the New Jersey-based decommissioning firm Holtec International, which has submitted a dismantling plan to the Nuclear Regulatory Commission. At a public information session held online last week, NRC representatives said the commission is reviewing Holtec's financial and technical qualifications, as well as public comments, before approving the license transfer.

According to the NRC, Indian Point will join 13 other nuclear power plants across the United States that have begun the decades-long process of decommissioning, which dismantles a facility to the point that it no longer presents a radioactive danger.

Under the decommissioning process, spent fuel rod assemblies are initially placed in large pools of water where the hot fuel is cooled for at least two years. Then the spent fuel is transferred into giant steel and concrete cylinders that stay at the site unless or until a national nuclear waste storage facility is created.

Opponents of the Indian Point shutdown note that the emissions-free energy it provides to the New York City area will be replaced largely by fossil fuel sources that contribute to climate change.

"We are not going to turn off the lights. We are not going to unplug our refrigerators. We are not going to turn off our air conditioning this summer. So it means we will turn to gas for reliable electric power," James Hansen, a former NASA scientist who was among the first to highlight the effects of climate change, said by email Tuesday. "That means more air pollution, with health consequences that include more COVID-19 illnesses and deaths. It means fracking, with the water pollution it causes. Most of all it means more greenhouse gases, carbon dioxide and methane."

A 2017 analysis by the New York Independent System Operator, which runs the state's electrical grid, concluded that Indian Point's closure won't impair the grid's ability to keep New York City's lights on. But the analysis assumes three major natural gas-fired power plants in the region will pick up the slack. They include the soon-to-be-completed 1,100-megawatt Cricket Valley Energy Center in Dutchess County, which has been subject to numerous protests by fossil fuel opponents. Two other facilities totaling 800 megawatts came online in 2018.

The Climate Coalition, a group of climate scientists and environmental groups, sent a letter to Cuomo last week asking him to suspend the closure, saying it will make the state more reliant on fossil fuels and more vulnerable to power disruptions during the coronavirus pandemic.

But a recent study by the Oakland, California-based Physicians, Scientists and Engineers for Healthy Energy found that renewable energy, storage and energy efficiency measures in line with New York's clean energy targets will contribute more electricity than is lost from Indian Point, making a sustained increase in natural gas generation unnecessary. In 2019, the state mandated that 70% of its electricity must come from renewable sources by 2030.