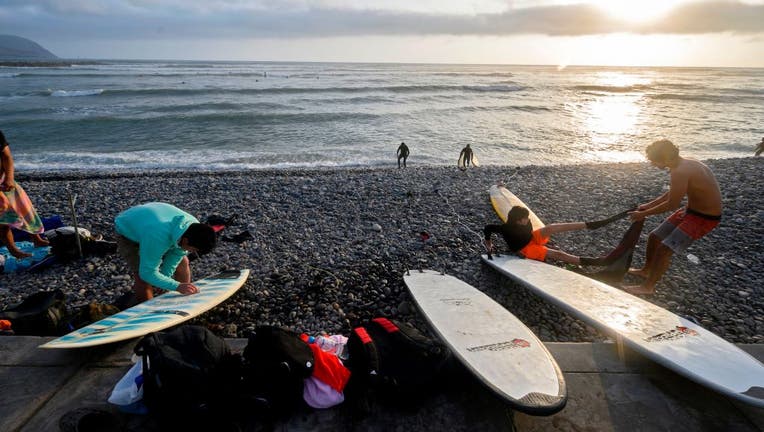 FILE - Surfers enjoy the raising temperatures at a beach in Lima, on October 22, 2020, amid the new coronavirus pandemic. (CRIS BOURONCLE/AFP via Getty Images)

CUZCO, Peru - Efraín Valles guided world leaders, pop stars and a princess on exclusive tours through the land of the Incas. He now makes ice cream to survive amid the coronavirus pandemic.

Valles, once one of the most sought-after tour guides in Cuzco high in Peru's Andes, is one of the 1.3 million people nationwide in a tourism industry devastated by the novel coronavirus and the measures imposed to fight its spread, including international travel restrictions.

Cuzco, the historic capital of the Inca empire near Machu Picchu lives almost entirely from international tourism and is suffering the worst crisis in its recent history. More than 226,000 people who make crafts or work as waiters, hotel staff and taxi drivers, have been plunged into an economic abyss. Merchants say they have lost more than two-thirds of their income.

“We are starting from scratch in an activity that we never thought we were going to do,” said Valles, who together with two of his colleagues have started making artisanal fruit ice creams they sell under the name of “Qosqo Creme."

The last decade was brilliant for Valles. In 2014, he was called the best guide in the world by British tourism magazine Wanderlust and in 2016 the government made him an ambassador for a marketing strategy to draw more international tourists

He gave tours to Princess Beatrice, granddaughter of Queen Elizabeth II, the former president of the World Bank Jim Yong Kim, British singer Ed Sheeran, as well as the grandchildren of U.S. explorer Hiram Bingham, who photographed Machu Picchu in 1911.

But the arrival of the novel coronavirus in March and travel restrictions turned Cuzco, which received more than 1.8 million international visits annually, into a near ghost town. Only Spanish and Quechua can be heard in Cuzco's main square, something unimaginable before the pandemic when it resembled a small Babel with tourists speaking a multitude of languages.

Hotels, travel agencies, jewelry stores, restaurants, cafes, chocolate shops and dollar exchange houses are all closed by the square. Only a few souvenir shops remain open but they go for days without customers.

"I don’t sell anything,” said Lourdes Auca, 50, who reopened her shop selling alpaca wool hats in the plaza two weeks ago. She pays $2,100 a month in rent for the shop and before the pandemic, on a good day, she would earn up to $300. Her two sons have dropped out of college because the family ran out of money.

Ruth Rodríguez, owner of the tourism agency Ruthbela Travel Tours, said that thousands of tourists would normally come on June 24 for Inti Raymi, the Incan festival of the sun. But this year the streets were empty.

“The streets seemed to be crying because there was no one,” said Rodríguez, 37, who has accumulated $13,000 in debt.

Peru's central government created a $143 million fund as a guarantee for banks to loan money to the tourism sector, but Rodríguez says she was recently denied $5,000 by a bank. She contends the fund only favors large business groups.

Fredy Deza, Cusco’s regional director of tourism, said there are 8,000 tour guides in the region who do not have access to these benefits.

“Artisans are not recognized by banks either,” he said.

The small town of Aguas Calientes, the closest to Machu Picchu, is also a ghost town. More than 60% of its 8,000 inhabitants left as businesses shuttered.

Pilar Pérez, a 34-year-old sweeper, told said that in four years of work, she has never found so little garbage on the streets of Aguas Calientes. “This has never happened,” she said.

Lidu Guzmán, 32, owner of the Luna Muna hostel in Aguas Calientes, has no tourists in her five-story building.

“We are at zero,” she said. “It will be hard until there is a vaccine.”

A recent law designed to protect Machu Picchu's ruins, which sets a limit of 675 tourists per day, will also hurt hotels, owners say. Before, 6,000 tourists arrived on the best days and about 4,000 in the low season.

“It means they will come in the morning and leave in the afternoon,” Guzmán said.

Tourism entrepreneurs in Cuzco believe things could normalize in 2022, but expect that in 2021 they will barely reach 30% of what they earned in 2019. For now, they are focused on attracting business travelers, local tourists and if possible some visitors from nearby countries.

"Our first strategy is to keep the service at the lowest possible cost, trying to optimize the relationship between price and quality,” said Carlos Milla, president of the Cuzco Chamber of Tourism.

Many hotel staff were laid off at the start of the pandemic in March, but their employers have started calling them again.

Cleydy Auca, who graduated as an administrator but cleans hotel rooms, said she was rehired a week ago at Peru's minimum wage.

In seven months of unemployment, the 25-year-old saw her savings of $1,300 disappear buying food for herself and her parents in a poor neighborhood on Cuzco's outskirts.

Now, wearing a mask, cap, gloves and using disinfectant, she cleans the rooms of the few guests who arrive at the hotels.

“It’s scary,” she said as she arranged the white pillows in a room. “But it is scarier to be out of work.”

Valles, the tour guide, sensed the fragility of his job a few weeks after the government announced the quarantine. He had to pay the mortgage on his apartment and the private studies of his three children.

So he started selling avocados dressed in a Superman costume. As others began to sell the same product, he switched to cheese, honey and eggs. Then in June, he joined two tour guide friends in making artisanal ice cream.

He sometimes thinks of his old profession hit by the pandemic.

“You despair,” he said. “You question yourself and you wonder why you didn't study another career.”