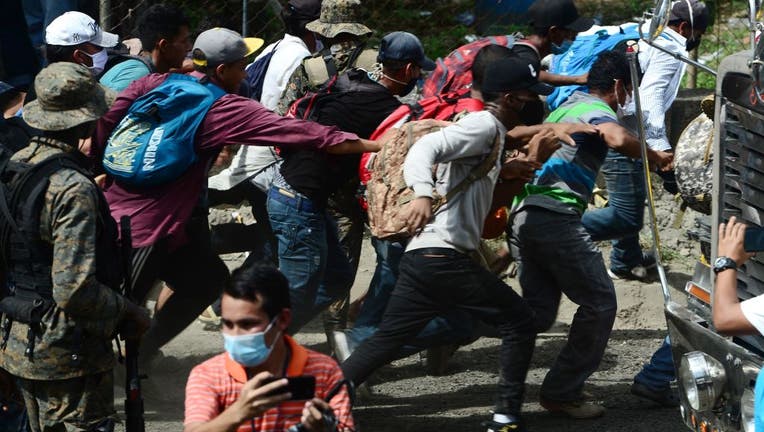 Honduran migrants break the police fence to enter Guatemala on their way to the US. (Photo by ORLANDO SIERRA/AFP via Getty Images) (Getty Images)

RIO DULCE, Guatemala (AP) - Threats from Guatemala’s president to deport migrants who entered the country illegally and the rigors of walking down tropical highways led dozens of migrants to begin the journey back to Honduras Friday, but hundreds more continued trudging toward Mexico and eventually, they hoped, the United States.

Guatemala immigration authorities said the migrants had split between two routes, with about 700 travelling north to Peten aboard trucks and minibuses and 400 walking and taking buses west toward the capital, Guatemala City. Another 800 were still walking in small groups toward the point where the routes diverge.

Honduran Fernando Sabión, 20, walked along shirtless, carrying Angel, a 4-month-old baby, in his arms. The boy isn't his, but Sabión was helping the baby's mother, Madelin, on the wearying walk through the miles of tropical heat.

“I am going (north) because I want to meet my father. He is in the United States," said Sabión. “He left when I was a baby, and I want to go up there and find a job in construction.”

Madelin trudged along, saying “Even though you get blisters on your feet, you're doing it for your children. We knew it would be hard, but we're going to get there.”

Some hitched rides aboard passing trucks. Wilmer Chávez, 35, got aboard the bed of one truck in his wheelchair, after his fellow Honduran migrants helped boost him aboard.

But further ahead on the highway through northern Guatemala, about 1,000 migrants met a police and army roadblock late Friday that prevented them from advancing.

About 100 soldiers armed with rifles and wooden sticks, and about 20 police officers, blocked the migrants, most of whom laid or sat down on the roadway to rest after the day's long walk. Some migrants playing improvised leadership roles tried to dialogue with the security forces.

“You cannot deny us the right to go on,” one of the migrant leaders told a police officer. “Tell your bosses to give us a chance,” said the migrant, who did not identify himself. The police office responded that the migrants had entered the country illegally, and that their orders were to return them to Honduras, or at least not allow them to proceed toward the Mexican border.

Behind them, another 300 migrants walked to catch up with the larger group, after an earlier military blockade had stepped aside to let them through.

In Mexico, President Andrés Manuel López Obrador suggested Friday that the estimated 2,000 migrants who set out from San Pedro Sula, Honduras, had perhaps been organized with the upcoming U.S. elections in mind.

“I think it has to do with the election in the United States,” López Obrador said Friday. “I don’t have all the elements, but there are indications that it formed with that purpose. I don’t know to whose benefit, but we’re not naive.”

The new group was reminiscent of a migrant caravan that formed two years ago shortly before U.S. midterm elections. It became a hot issue in the campaign, fueling anti-immigrant rhetoric.

On Thursday, Guatemalan President Alejandro Giammattei vowed to return the migrants to Honduras, citing efforts to contain the pandemic.

“The order has been given to detain all those who entered illegally, and return them to the border of their country,” Giammattei said in a broadcast address to the nation. “We will not allow any foreigner who has used illegal means to enter the country, to think that they have the right to come and infect us and put us at serious risk.”

Giammattei issued an order that would suspend some constitutional rights in the provinces they were expected to pass through, apparently in order to facilitate detaining them.

Most of those leaving Friday appeared to be doing so voluntarily, in some cases accepting rides back to the border from authorities in patrol vehicles and army trucks.

“The dream is over for the moment,” said Edwin Pineda, who waited for a bus that would return his family to Honduras on Friday. He was traveling with his wife, 4-year-old son and father-in-law, but two days of walking and already depleted funds made him reconsider.

Guatemala’s immigration agency reported Friday that 108 migrants had voluntarily agreed to return to Honduras. Another 25 unaccompanied minors were in the care of social services.

Guatemala had just reopened its borders, closed for months because of the pandemic, in September. About 2,000 migrants pushed their way through border guards into Guatemala Thursday.

Honduran migrants said they had decided to leave when they saw calls on social media for a new caravan to depart Oct. 1. But the factors that have pushed them to migrate remain the same. The pandemic has plunged an already struggling economy deeper into trouble. Migrants said they couldn’t find work and those who had jobs before lost them when the pandemic struck. They felt forced to leave to provide for their families.

Migrant caravans from Central America gained popularity in recent years because they provided some degree of safety in numbers and allowed those who couldn’t afford to pay a smuggler to attempt the trip to the United States.

At first, they received generous support from the communities they passed, especially in southern Mexico. Last year, however, U.S. President Donald Trump threatened crippling tariffs on Mexican imports if that government did not slow the flow of migrants to the U.S. border. Mexico responded by deploying the National Guard and more immigration agents to intercept large groups of migrants.

The last attempted caravan was broken up by Mexican guardsmen in January. Hundreds of migrants crossed into Mexico, were allowed to walk for several hours up a rural highway and then detained.

This week, Mexico has been warning that it will enforce its immigration laws and even prosecute people who knowingly put public health at risk.

Even if the migrants were allowed to cross Mexico without interference, the U.S. has essentially closed its border to legal immigration and entering illegally is as difficult as ever.