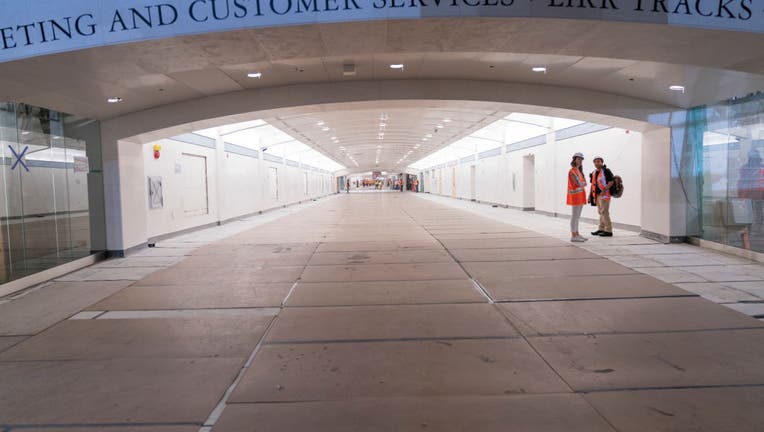 View of interior of East Side Access project under construction to connect LIRR (long island railroad) to Grand Central Terminal. It is the largest construction project by MTA. (Photo by Lev Radin/Pacific Press/LightRocket via Getty Images)

New York Gov. Kathy Hochul and officials from the Metropolitan Transportation Authority took a 27-minute test ride on the train Sunday morning from the Jamaica station into Grand Central.

The MTA’s East Side Access project links the Long Island Rail Road to Grand Central. Currently, the LIRR terminates at Penn Station on Manhattan’s west side, forcing Long Island commuters who work on the east side of town to backtrack on other modes of transportation to get to work.

More than 150,000 customers per day are expected to use the service when it begins next year. Opening up access to Grand Central had been talked about since the 1950s, and construction finally began more than a decade ago.

The project was initially estimated about $2 billion but has wound up costing more than $11 billion. Crews have blasted eight miles of tunnels through prehistoric-era bedrock and built a 350,000-square-foot concourse under the terminal.

Hochul spoke Sunday about how the new service would address quality of life issues. The Democrat also talked about the need to improve Penn Station to match the adjacent Moynihan train hall, a project championed by her predecessor, Andrew Cuomo.

"Now you get to Penn Station and you kind of put your head down," Hochul said. "I want people to look up. Everybody deserves to have that type of experience."