The president, a car enthusiast, took Ford's new all-electric version of its F-150 pickup truck called the Lightning for a quick test drive.

ESTERO, Fla. - Hertz announced on Monday that it will buy 100,000 Teslas by the end of 2022 as part of an ambitious plan to offer the largest fleet of electric rental vehicles in North America.

Starting in early November and expanding in the coming months, customers will be able to rent a Tesla Model 3 at Hertz airport and neighborhood locations in major U.S. markets, as well as in select European cities, the company said.

The rental car company’s investment is one of the largest purchases of battery-powered cars in history and the latest evidence of increasing commitments to EV technology. With the current order, electric vehicles will comprise more than 20% of Hertz's global fleet.

"Electric vehicles are now mainstream, and we've only just begun to see rising global demand and interest," Hertz interim CEO Mark Fields said in a statement. "The new Hertz is going to lead the way as a mobility company, starting with the largest EV rental fleet in North America and a commitment to grow our EV fleet and provide the best rental and recharging experience for leisure and business customers around the world."

Fields told the Associated Press on Monday that Teslas were already arriving at the company’s sites.

Hertz is also installing thousands of chargers throughout its location network. The company said customers who rent a Tesla Model 3 will have access to 3,000 Tesla supercharging stations across the U.S. and Europe.

Hertz said it will offer a "differentiated rental experience" for the Teslas, including digitized guidance to educate customers about the electric vehicle and an expedited EV rental booking process in the company’s mobile app.

It’s also enlisting seven-time Super Bowl champion Tom Brady to help spread the word through a new campaign. Brady will be featured in two new ads that show the NFL quarterback renting, recharging and using an EV at a Hertz airport location. 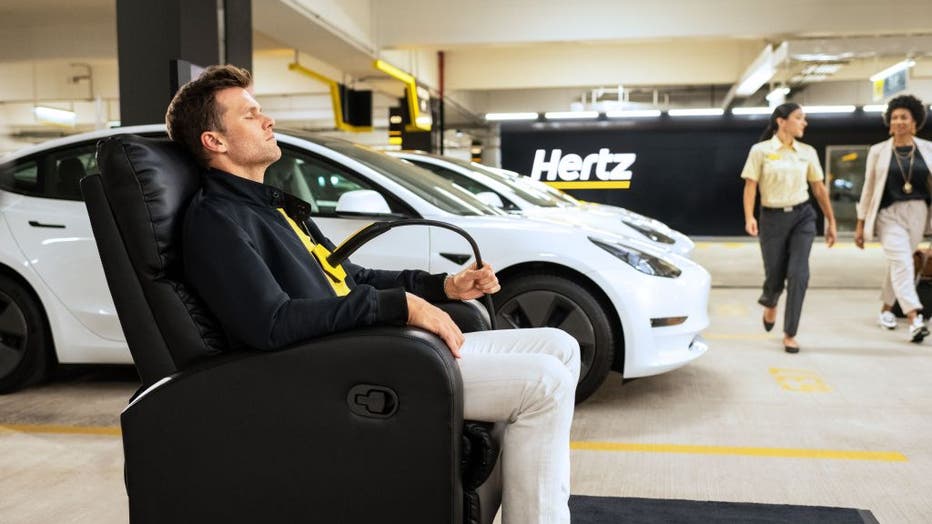 In this image released on Oct. 25, 2021, seven-time Super Bowl champion Tom Brady is pictured recharging at Hertz as part of the company’s new campaign. (Photo by Eric R. Davidson/Getty Images for HERTZ)

Hertz filed for bankruptcy in May 2020 during the COVID-19 pandemic — which pummeled the travel industry — and later re-emerged with nearly $2 billion in financing.

"This new financing will provide additional financial flexibility as we continue to navigate the pandemic's effects on the travel industry and take steps to best position our business for the future," Hertz President and COO Paul Stone said in a statement last year.

Tesla’s stock jumped more than 6% following the news on Monday, and the electric-car maker’s valuation hovered just a few billion dollars short of $1 trillion, according to MarketWatch.

The purchase by one of the world’s leading rental car companies also reflects its confidence that electric vehicles are gaining acceptance with environmentally-minded consumers as an alternative to vehicles powered by petroleum-burning internal combustion engines.

World leaders have sounded the alarm on climate change, and Hertz's investment follows many automakers ramping up the production of electric vehicles amid charging technology improvements and governments imposing stricter pollution regulations.

General Motors, the Detroit automaker making an aggressive push into EVs, established a goal in January of offering electric-only vehicles by 2035 and becoming carbon neutral in both its global products and its operations by 2040.

Ford said 100% of its passenger vehicle range in Europe will be all-electric by 2030, while Volvo is also aiming for its vehicles to be completely leather-free and fully electric in the same timeframe.