NEW YORK - For decades, work on a massive rail project has been grinding 15 stories below the shuffling footsteps of millions of New Yorkers and beneath the East Hudson River and Manhattan skyscrapers.

The new transit center, built inside a massive man-made cavern and served by rail tunnels carved through bedrock, is being heralded as an important addition to the nation’s busiest railway network.

"We got the job done. There were so many roadblocks and challenges and detours along the way."

New York Gov. Kathy Hochul was the ninth governor to oversee the project that had its genesis six decades ago.

The new 700,000-square-foot terminal, dubbed Grand Central Madison, was conceived and constructed at a time when New York City's transportation system was bursting with passengers.

It opens in a different era, with ridership still significantly down from where it was before the COVID-19 pandemic ushered in a new era of remote work.

The new terminal, adorned with public art and replete with storefronts and restaurants — most still empty — is the country’s largest new railway station in nearly seven decades and the most significant expansion over the last century of the Long Island Rail Road, the busiest commuter railroad in North America. The two-level concourse supports four platforms and eight tracks.

Much of the construction of the terminal has been complete for months, though some finishing touches won’t be complete for another few weeks, officials acknowledged. 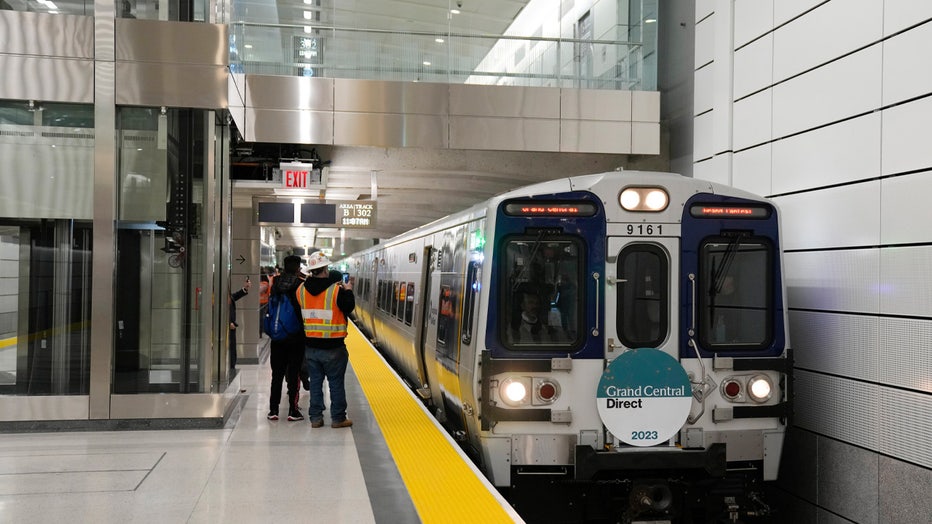 The first Long Island Railroad train to arrive in Grand Central Station slows down as it enters the new annex in New York, Wednesday, Jan. 25, 2023. After years of delays and massive cost overruns, one of the world's most expensive railway projects o (AP Photo/Seth Wenig)

The station was to have opened by the end of 2022 but was delayed slightly by issues with heating, ventilation and air conditioning.

For Long Island commuters headed for Manhattan, the terminal's key benefit is the ability to take a train directly to the East Side, where previously the only option was to go to Pennsylvania Station on the West Side, then travel back by subway or bus.

"I've been waiting for 30 years," said John Cannon, a Long Island man who was on the inaugural 21-minute ride from Jamaica to Manhattan. "I don't have to take the subways anymore."

Many of the subterranean tunnels that carry rail passengers below the Hudson River are more than a century old, some of which are in need of deeper maintenance.

The new tunnels built for the project will also allow Amtrak to temporarily divert its trains to the new tunnels so it can begin refurbishing aging eastside tunnels and tracks. 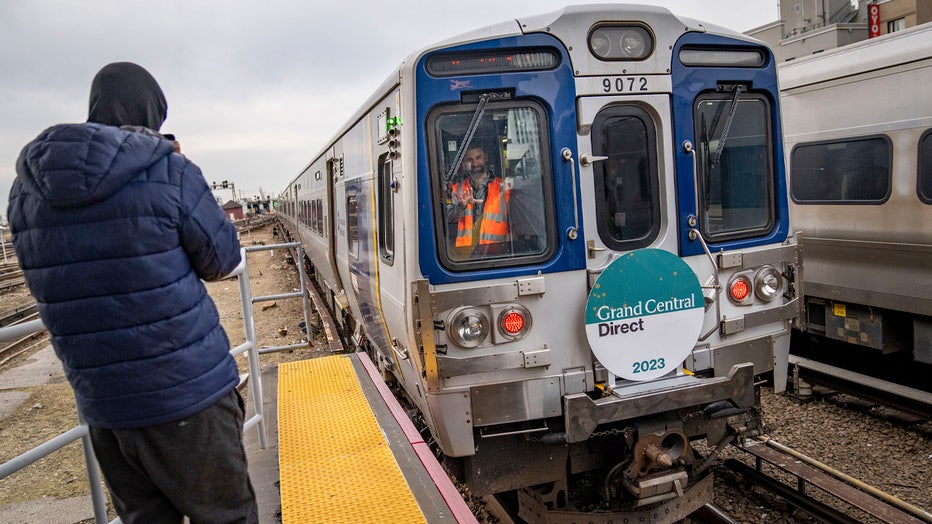 A rider in the rear conductor's booth waves to photographers on the platform after their Long Island Rail Road train departs for its inaugural trip from Jamaica station towards Grand Central Terminal, Wednesday, Jan. 25, 2023, in the Queens borough o (AP Photo/John Minchillo)

For decades, the project kept chugging along, even amid concerns about ballooning costs. Construction began in the 1960s, but was abandoned for a time because of a series of economic crises.

Spending on the massive construction project has grown to more than $11 billion — more than triple the initial estimate of $3.5 billion two decades ago. The project bore through two miles of bedrock; per mile, it would be one of the world’s most expensive rail projects ever completed.

"It’s a useful project. But for $11 billion, it would be better not to have built it," said Alon Levy, transportation fellow at New York University’s Marron Institute, who has been compiling railway cost data from around the world. 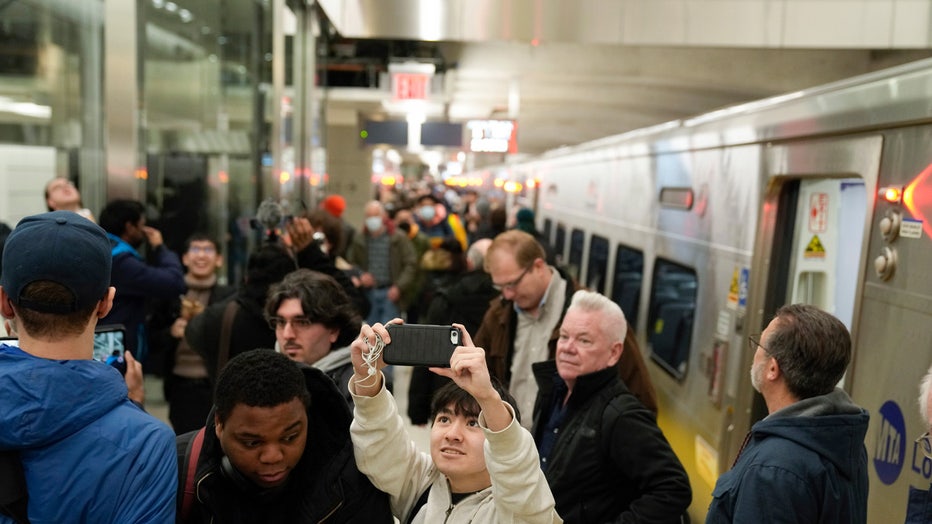 Riders take photos and videos as they exit the first Long Island Railroad train to arrive in Grand Central Station in New York, Wednesday, Jan. 25, 2023. After years of delays and massive cost overruns, one of the world's most expensive railway proje (AP Photo/Seth Wenig)

The money, he argues, could have been used for other transportation projects, including improving capacity for existing railway lines.

Officials have acknowledged that engineering costs and the high price of New York City labor contributed to spiraling expenses.

"This is not a small project. This is one of the greatest engineering feats. And it’s a tribute to the MTA that they were able to overcome what I would say was some delays of bureaucracy, delays of engineering," said Mitchell Moss, a professor of urban policy and planning at New York University.

Despite the setbacks, Tom Wright, the president of the Regional Plan Association, hailed Wednesday's opening as a "driver of economic growth and prosperity," even as the region "still faces urgent transportation, housing and resiliency challenges." 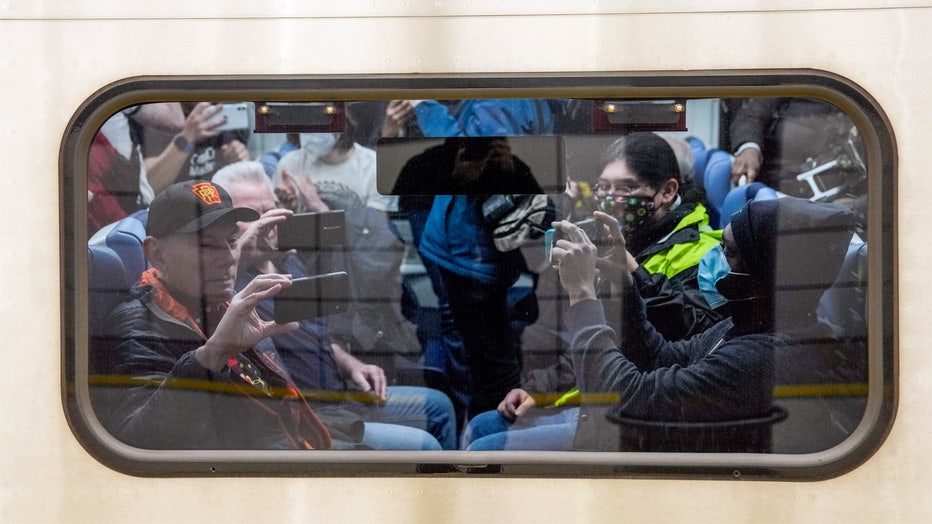 Long Island Railroad riders take photos and videos as they arrive in Grand Central Station on the first train to arrive in the new annex in New York, Wednesday, Jan. 25, 2023. After years of delays and massive cost overruns, one of the world's most e (AP Photo/Seth Wenig)

"Because this region has an interconnected network of transit, when you make an improvement, the beneficiaries are actually systemwide," said Wright, whose nonprofit develops and advocates for ways to improve the regional economy, environment and quality of life.

Over the past week, the Long Island Rail Road carried about 1 million riders, or about two-thirds the number it transported for roughly the same week in 2019, according to statistics compiled by the Metropolitan Transportation Authority.

When full service begins to Grand Central Madison, the LIRR will add another 269 trains per weekday on top of the roughly 660 trains already in operation, officials said. About 160,000 passengers are expected to hop on and off platforms at the new terminal. 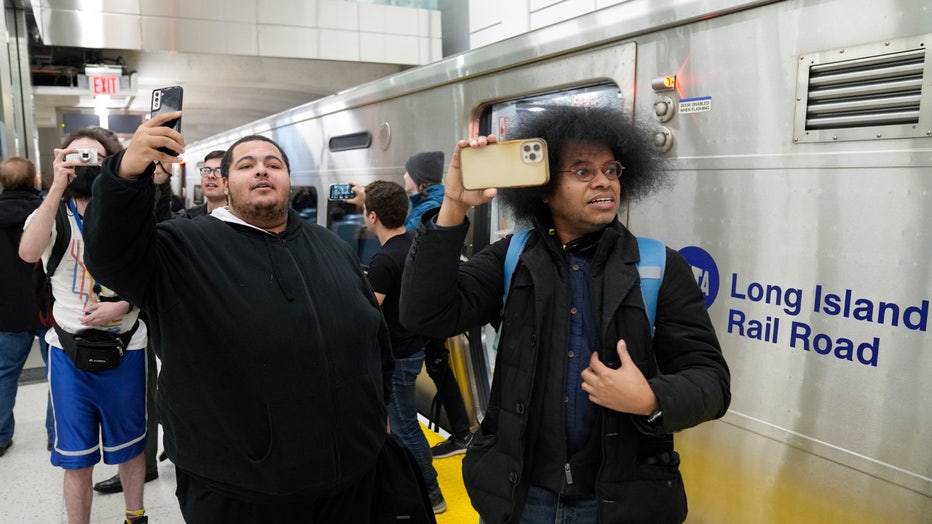 Riders take photos and videos as they exit the first Long Island Railroad train to arrive in Grand Central Station in New York, Wednesday, Jan. 25, 2023. After years of delays and massive cost overruns, one of the world's most expensive railway proje ( AP Photo/Seth Wenig)

Coupled with expanded service to Penn Station, the link to Grand Central would allow rail stops to open along long-neglected parts of the city, including the Bronx, spur new housing developments and serve as an economic engine.

"It obviously makes the businesses in Midtown East a more attractive destination for commuters from Long Island," said Kathryn Wylde, the president of the Partnership for New York City.

BOBBY CAINA CALVAN, with the Associated Press, helped contribute to this report.