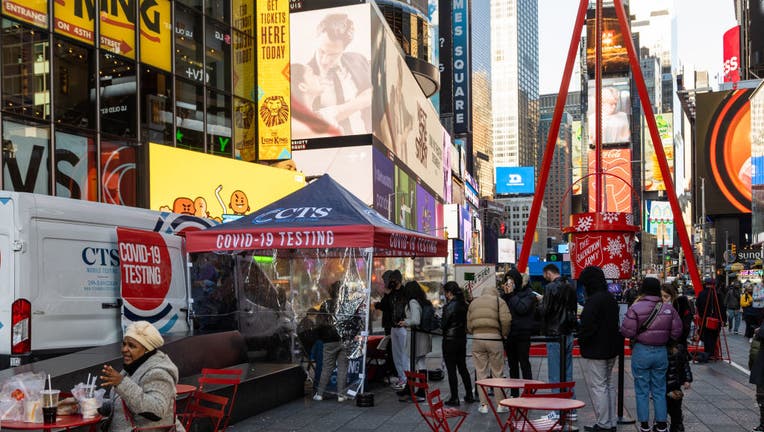 People stand in line for a COVID-19 testing site in Times Square near a large Salvation Army donation location on December 03, 2021 in New York City. (Photo by Alexi Rosenfeld/Getty Images)

NEW YORK - Three more cases of the Omicron variant of the coronavirus have been found in New York, according to Governor Kathy Hochul.

All three of the new cases were found in New York City, bringing NYC's total to seven, in addition to a case already found on Long Island.

The arrival of omicron comes as hospitals statewide continue to strain under a surge in coronavirus cases, most traced to the delta variant, along with staffing shortages.

The number of people testing positive statewide each day for the virus has doubled in the last 30 days.

New York’s omicron cases so far appear to be unrelated, Hochul said. One of the known cases involved a man from Minnesota who was among 50,000 people who attended a three-day anime festival in New York City in November. Authorities have urged anyone who attended the conference to get tested for COVID-19 and wear a mask in public.

On Friday, a Georgia resident who recently traveled to South Africa is now isolated in New Jersey after being infected with the omicron variant of COVID-19.

"Keep using the tools to help prevent the spread of COVID & its variants," Hochul said in a tweet. "Get vaccinated, get your booster, & wear your mask."

The variant has been detected in a handful of other states so far, including California, Colorado and Hawaii.

Much remains unknown about omicron, including whether it is more contagious, as some health authorities suspect, whether it can thwart vaccines and whether it makes people as sick as the original strain.

The variant has been detected in a handful of states so far, including Nebraska, Minnesota, California, Hawaii, Maryland, Pennsylvania, Colorado, Utah, Missouri, New Jersey and Georgia.