New York Gov. Andrew Cuomo said his administration will work to get a coronavirus vaccine distributed to all New Yorkers fairly.

NEW YORK - New York Gov. Andrew Cuomo said he may take legal action against the federal government over the potential distribution of a pending coronavirus vaccine and that he would "mobilize an army" to get New Yorkers vaccinated.

President Donald Trump on Friday suggested that an FDA-approved vaccine would be delayed to New York and other states that have pledged to carry out their own safety reviews of the vaccine. The president singled out New York and its governor

"The vaccine will be available to the entire general population with the exception of places like New York state where for political reasons the governor decided to say — and I don't think it's good politically, I think it's very bad from a health standpoint — but he wants to take his time with a vaccine," Trump said on Friday. "We can't be delivering it to a state that won't be giving it to its people immediately."

In remarks made at Riverside Church in Manhattan on Sunday, Cuomo said that the federal government had politicized the issue, not him.

"We have a vaccine on the way, truly great news. But polls say 50% of the American people say they would not take the vaccine if it were available today because they don't trust the way this federal government has politicized the process," Cuomo said. "So, New York and other states — seven in total — will simultaneously review the vaccine approval with independent medical experts, so people know it's safe."

Moderna announced that its coronavirus vaccine candidate appears to be about 95% effective. The first doses will go to health care workers and high-risk people.

The governor said the Trump administration's plan to distribute the vaccine through private health care — such as hospitals, big drugstores, doctors' offices — is inadequate.

"It sounds fine, right? But hold on, we know that our black, brown and poorer communities have fewer health care institutions. Their communities are all-too-often health care deserts," Cuomo said. "That's why we have more underlying conditions, and that's why the COVID death toll is so high for black and brown communities."

The governor said that New York is prepared to join the Urban League, NAACP and others in litigation against the federal government.

"If the Trump administration does not change this plan and does not provide an equitable vaccine process, we will enforce our legal rights," Cuomo said. "And we will fight to make sure every life is protected equally. because enough people have died, and enough injustice has been done during COVID. It stops now." 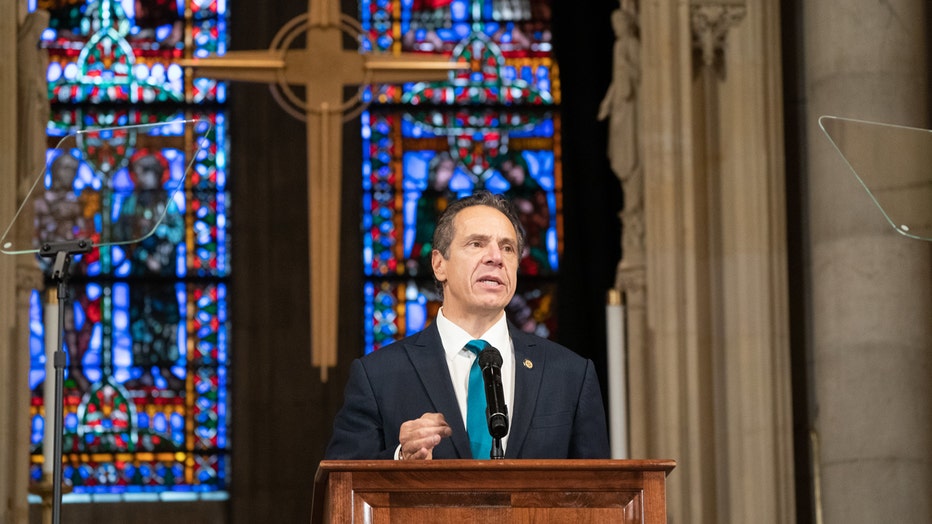 Last week, Pfizer announced that the potential vaccine it has been testing could be at least 90% effective against coronavirus infection.

Then on Monday, Moderna said preliminary data indicated that its vaccine candidate appears to be almost 95% effective.

However, neither vaccine will be available to the general public for several months.