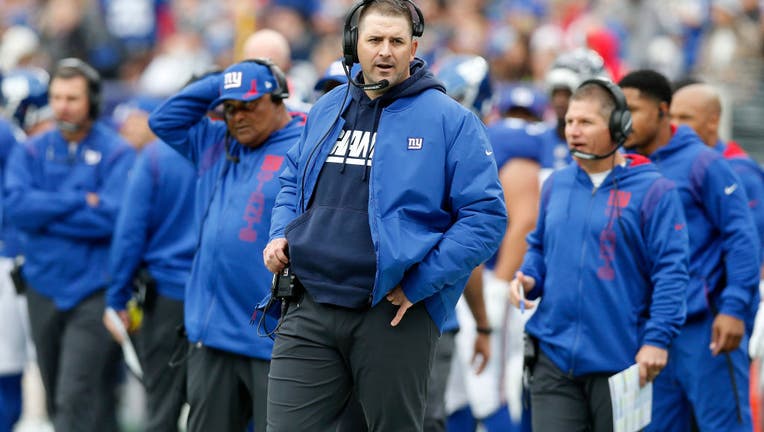 Head coach Joe Judge of the New York Giants in action against the Carolina Panthers at MetLife Stadium on October 24, 2021 in East Rutherford, New Jersey. (Photo by Jim McIsaac/Getty Images)

EAST RUTHERFORD, N.J. - The New York Giants limited access to their facility after the laboratory handling their COVID-19 testing had an unusually high number of false positive tests.

The Giants said several more players and coaches had false positives on Thursday, forcing the team to cancel in-facility morning meetings for players and to close their office to non-football staff.

Coach Joe Judge said some players and coaches were sent home and later brought back to the building for an afternoon walkthrough and practice when a second test was negative.

"It's been a different type of day, we have flowed with it pretty well as an organization," Judge said before practice, adding it was reminiscent of last season when the pandemic overshadowed the season at times.

Left guard Matt Skura, who was in the COVID-19 protocol on Wednesday, returned to practice Thursday.

"It’s a little adjustment," tight end Evan Engram said after practice. "Some things change, a little sudden change. Some unfortunate stuff that we’re not really in control of. We just have to abide by the rules. Everybody is in here taking care of business, following the rules."

The Giants said Bio-Reference Laboratories, which handles testing for the league, is experiencing an unusually high number of false positives using the Rapid Mesa Test. With one exception, the team said, all the positive Mesa test results over the past two days have come back negative through PCR testing.

PCR is a molecular test that detects genetic material of the virus using a lab technique called polymerase chain reaction.

The laboratory is working with experts to determine the source of the problem, the team said.

The NFL and the laboratory are monitoring the situation, the team said, adding it is temporarily halting the use of the Rapid Mesa Test and administering PCR tests only.

The Giants' medical staff told Judge to be patient.

"We have told every player to be ready, to be focused and locked in and ready for this game," said Judge. He has told his staff to have everybody ready to go on Sunday morning should more positive tests rule out players.

Judge said no player has been ruled out for the game. The person who will not be available is running backs coach Burton Burns, whose positive test return on Tuesday was confirmed.

Barkley has missed the past three games with an ankle injury and his absence from practice this week means he probably will not play Sunday.

The Giants went on alert Tuesday when 13 members of the organization tested positive after the team returned from a Monday night game against the Chiefs in Kansas City. The people who tested positive were retested and Burns was the only one who had a second positive test.

"We young…..everybody make mistakes….y’all lookin at the situation like "this or that" kuz it ain’t y’all…having so much too say," Toney tweeted. "(H)e know he messed up don’t drag em for it……that’s goofy to me….just pray for the families involved."

"I talked to Kadarius," Judge said. "It’s important that we understand how we articulate our words and put them out there. Ultimately, our prayers are with everybody."

NOTES: WR Kenny Golladay, who has not played since hurting a knee against Dallas on Oct. 10, practiced on a limited basis. WR Sterling Shepard (quad), LB Lorenzo Carter (ankle), DB Nate Ebner (ankle) and WR Dante Pettis (shoulder) did not practice for the second straight day. TE Kyle Rudolph did not practice to handle a personal matter.