President Biden defended his administration's policies amid rising inflation, which is at a four-decade high. Biden blamed the pandemic, Russia's invasion of Ukraine, and high gas prices despite increased supply.

NEW YORK - Gas prices are hitting record levels across the country and have now topped $6 a gallon in Manhattan.

The average price of gas across the country rose by more than 15¢ per gallon in the past week and is now about $4.36 per gallon. Prices could continue to climb through Memorial Day, according to GasBuddy.

The soaring price of diesel also set a new all-time record of $5.53 per gallon on Tuesday.  That is putting a squeeze on truckers who are needed for delivering goods across the country, and especially in New York City, where almost everything is delivered via truck.

GasBuddy warns that gas and diesel prices are "spiraling out of control" with the imbalance between supply and demand widening daily across the globe.

Patrick De Haan, head of petroleum analysis at GasBuddy said, "There’s little, if any, good news about fuel prices heading into summer, and the problem could become worse should we see an above-average hurricane season, which could knock out refinery capacity at a time we badly need it as refined product inventories continue to plummet." 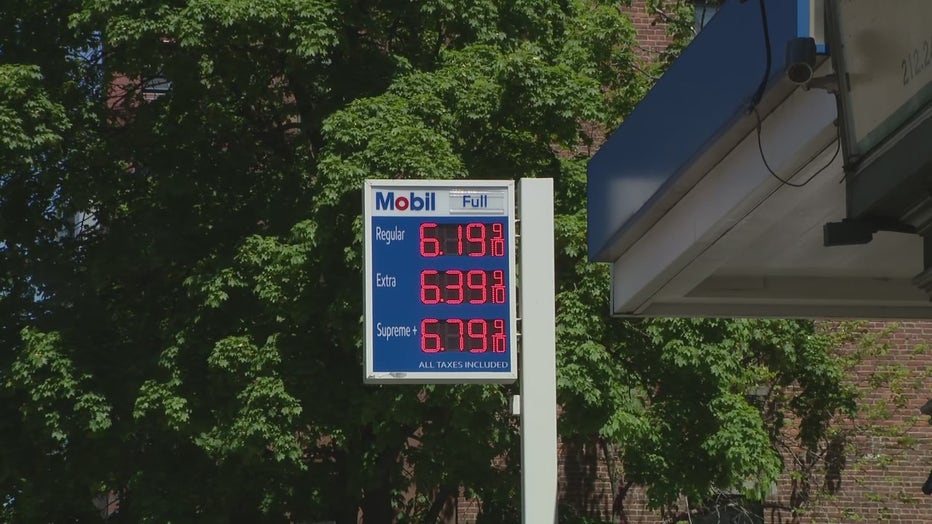 GasBuddy says that the European Union sanctioning Russian oil is a big reason for the rapidly rising costs.

A Mobil station on 11th Ave. on the West Side of Manhattan has eye-popping prices.  On Tuesday afternoon regular gas went for $6.20 a gallon and supreme grade gas was $6.80 a gallon.  Those prices are about $1.30 a gallon more expensive than in October.

According to the Lundberg Survey released on Sunday, the highest average price for regular-grade gas is in the San Francisco Bay Area, at $5.85 per gallon. The lowest average is in Tulsa, Oklahoma, at $3.80 per gallon.