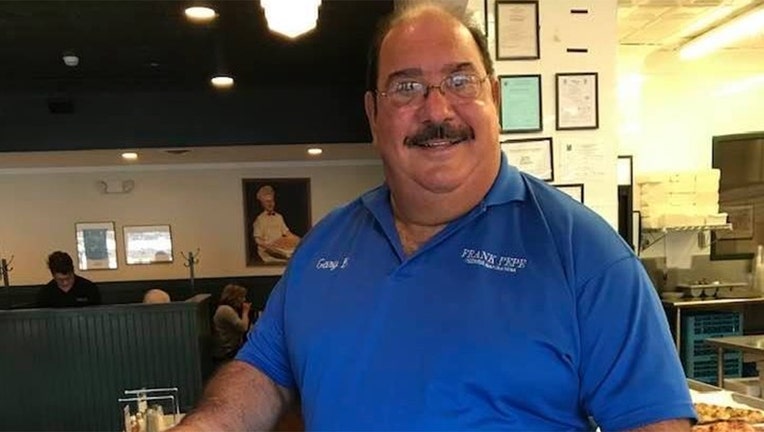 NEW YORK - Gary Bimonte, a third-generation co-owner of a nearly century-old pizzeria in Connecticut that won over foodies with its iconic white clam pizza and other innovative coal-fired oven pies, has died.

Frank Pepe Pizzeria Napoletana in New Haven was closed on Thursday to "mourn the passing of our brother and friend" but reopened Friday "because we know that Gary would want us to share his love for all of you through a delicious Pepe's pie," the restaurant wrote on Twitter.

"Gary was the pride and joy of the Pepe's family, and there are no words to express the immense void that his passing has left in our hearts," the restaurant said in a statement posted online. "He truly loved and cherished our family's history, and he was so proud of the legacy that has carried through all these years."

Management did not say when or how Bimonte died, though FOX 61 reported he died of a heart attack at home on Wednesday evening. He was 61, the station reported.

Bimonte was the youngest grandson of Frank Pepe, who opened the pizza shop on Wooster Street in New Haven in 1925, the Providence Journal reported. It became a focal point of the waterfront neighborhood, which grew and changed around it over the decades.

Pepe's pizza often made the "best" lists of various publications. The white clam pizza, cited for its "fresh clams, grated pecorino romano, garlic, oregano and olive oil," topped The Daily Meal's list for the best pie in 2020. The website also called Frank Pepe's "one of the greatest old-school restaurants of all time."

Bimonte became a celebrity of sorts with numerous appearances in TV news segments and documentaries, including in the premiere episode of the Netflix food series Ugly Delicious and the film Pizza, A Love Story, which chronicled New Haven's three legendary pizzerias: Pepe's, Sally's Apizza, and Modern Apizza.

"Growing up in Connecticut, it was a thrill to film with him in New Haven for the Pizza [episode] of Ugly Delicious — and a treat to eat lunch there with my parents after we wrapped," filmmaker Eddie Schmidt tweeted.

"Gary was a good friend to our movie and was so proud of his pizzeria(s) and New Haven," Bechard tweeted. "Such a positive force."

In 2006, Bimonte shepherded the brand's expansion with the opening of other locations to keep his grandfather's legacy alive, he told the Providence Journal. Pepe's now has a dozen restaurants in Connecticut, Massachusetts, New York, and Rhode Island. (The New York location is in Yonkers.)

"He'll be missed. He was well-loved by a lot of people," Bob Consiglio, whose family founded Sally's Apizza, told the New Haven Register. Sally's, another New Haven legend, is located just down the block from Pepe's.

"Gary was as much of an icon and cornerstone of #NewHaven as anyone," Connecticut Gov. Ned Lamont tweeted. "A man with big heart, Gary was immensely proud and dedicated to his family, employees and greater community."

New Haven Mayor Justin Elicker said Bimonte will be remembered for "the love he had for this city, his employees, and his family."

On Friday, Pepe's thanked the public.

"We are overwhelmed by the outpouring of support on the passing of our beloved brother, Gary Bimonte," the restaurant tweeted. "His love and passion will never be forgotten and will continue to be shared in every pizza we serve."