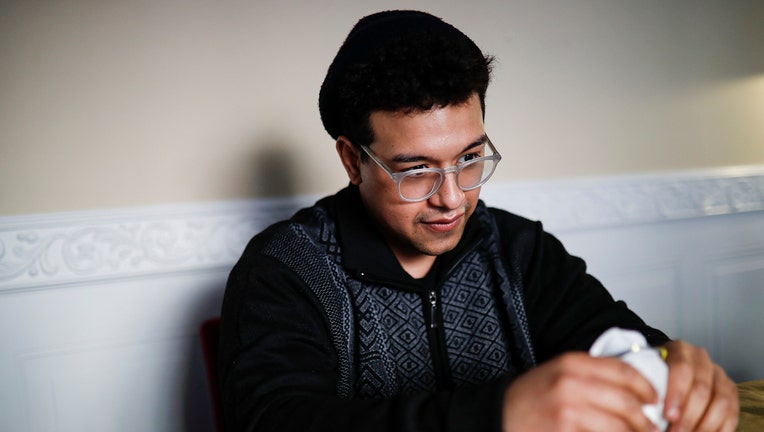 Funeral director Jesus Pujols in a funeral home he works with during his second shift of the day, Monday, April 6, 2020, in Brooklyn, New York. Pujols is sleeping in the same minivan he uses to transport bodies. (AP/John Minchillo)

NEW YORK (AP) - Jesus Pujols has fetched the deceased from emergency rooms. He has stepped over bodies in refrigerated trailers. The funeral homes he serves are storing remains by the dozen, often in chapels chilled by cranked-up air conditioners.

The 23-year-old funeral director is sleeping some nights in his minivan — the same one he uses to transport the dead during the coronavirus pandemic. He thinks he worked nearly 80 hours last week, but he hasn't really kept count.

"Right now, money is not worth it. It's not worth it," he said. "I would give up my job any day for like a normal, normie job. I'd much rather be quarantined in my house right now."

Monday was Pujols' day off. That's what the schedule said, at least. He knew that wouldn't work out.

First, the overnight undertaker had to finish his shift from Sunday. He pulled into his first hospital at 8:30 a.m. that day, and finally collapsed into his bed around 4:30 Monday morning.

At midnight, he was outside a hospital dealing with yet another delay. The only attendant working the morgue had been pulled away by another emergency, so Pujols waited.

Hospitals are begging funeral directors to chauffeur away the deceased, but some don't have the resources to coordinate the pickups. Last week, Pujols visited one hospital twice and couldn't find the body he needed. On his third try, he was told the remains were still in the intensive care unit.

"I understand there's so many people dying," Pujols said. "But there's no excuse to lose a person."

He woke up at 11:30 a.m. Monday to a request from a friend. His uncle died in Valhalla, New York, and the body needed to be delivered to a funeral home in Brooklyn. So Pujols drove an hour each way, unloading the remains at De Riso funeral home that evening.

He was back on the clock by 7. De Riso had a body in need of preparation before its final disposition, but there was no room. Pujols packed the remains into his minivan and took them to a different home.

First, though, he sat for a moment at De Riso, running fingers through his curly, black hair and glaring angrily out the front door.

Pedestrians strolled by along a sun-soaked 4th Avenue in Brooklyn, many without masks or gloves.

"I thought the virus died for a second," he said. "There's so many people outside. This is the most amount of people I've seen outside in like three weeks."

The virus, of course, isn't dead. It's devastating.

He sees that more clearly than most, despite his bleary eyes.

"We're not catching up at all."