Wait for it: A sinkhole swallowed a van in the Bronx following rain across the state on Monday.

In the Bronx, heavy rains triggered a large sinkhole that eventually claimed two vehicles parked in the wrong place at the wrong time.

Doppler Radar estimated rainfall rates between 3-5 inches per hour as thunderstorms moved through just before 3 p.m.

7 FACTS YOU SHOULD KNOW ABOUT FLASH FLOODS

In New York City, pedestrians sloshed through streets in Washington Heights. The NWS reported that Central Park received 1.85 inches of rain, setting a new rainfall record for the day, and breaking the old record of 1.76 inches set in 2012.

Ponding on the tracks and downed tree limbs caused major delays and temporary closures of train and subway stations in New York.

"Hackensack, Lodi, Teaneck areas in New Jersey were stuck under these downpours at these rates for roughly 30 minutes," said FOX Weather Meteorologist Marissa Lautenbacher. "So, estimating that would be approximately 2 inches of rain in that short amount of time causing the flash flooding." 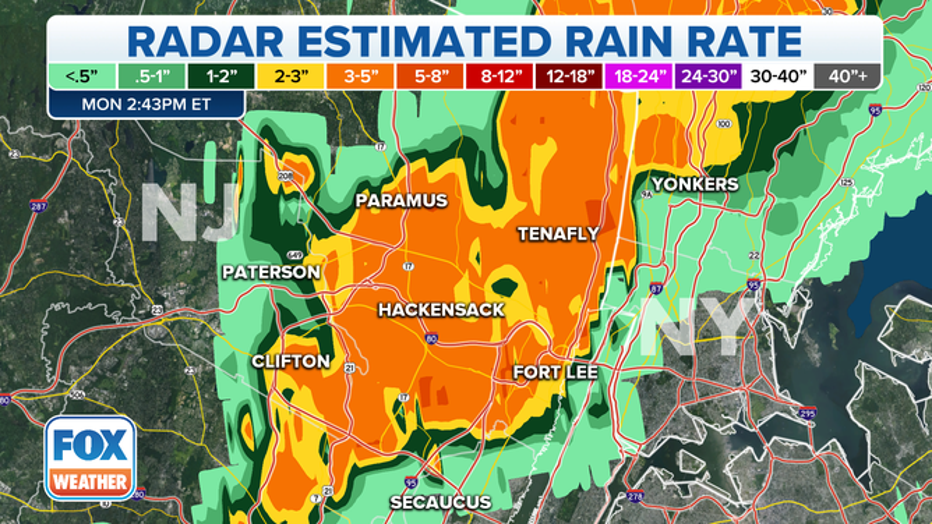 Calls came in to 911 quickly about cars stuck in the flash flooding in Hackensack, New Jersey where some rainfall totals are as high as six inches.

HERE'S WHAT TO DO AFTER YOUR CAR IS FLOODED

The police needed heavy-duty vehicles to get through the streets to rescue drivers. Those are vehicles most residents of the suburban, bedroom community of New York City don't normally see.

PLAN, PREPARE, PROTECT: HOW TO BEST COVER YOUR PROPERTY AGAINST FLOODS

Drivers in Lodi, New Jersey drove through the flooded streets despite "Turn around, don't drown" pleas from law enforcement.

Yonkers, New York motorists were a bit more cautious. Watch all the cars wait for the first driver to make it through the feet of water before proceeding themselves.

The storms exploded ahead of a cold front which will finally move past the New York Tri-State region by Tuesday morning. The National Weather Service issued Flash Flood Warnings for counties across New York, New Jersey and Connecticut.

The FAA issued ground stops for Philadelphia, Newark, Kennedy and LaGuardia Airports as the severe storms passed overhead. The NWS clocked a wind gust of 55 mph from the Execution Rock buoy which is tropical storm force. Another gust of 69 mph wind hit the buoy a bit later.

Rain will continue through the overnight before the sun returns Tuesday to start the long drying out process.

LINK: Get more on this story from FOXweather.com