Hurricane Fiona became the first major hurricane of the Atlantic season overnight near the Turks and Caicos Islands, and the already-deadly storm is forecast to intensify even more as it tracks toward Bermuda.

Fiona has been steadily strengthening and could reach Category 4 intensity by late Wednesday as it eyes Bermuda later this week.

Even with Hurricane Fiona pulling farther away from the Caribbean, its outer bands will continue to produce heavy rain over isolated portions of the Dominican Republic and Puerto Rico through Tuesday. The FOX Forecast Center warns that these rains could produce additional localized life-threatening flash flooding.

Fiona made two landfalls as a Category 1 hurricane, the first one Sunday afternoon along the extreme southwestern coast of Puerto Rico and the second one early Monday morning in the eastern Dominican Republic.

In Puerto Rico, the city of Ponce clocked a 103-mph wind gust, while in the Dominican Republic, a gust of 98 mph was recorded in Samana at El Catey International Airport. The high winds plunged all of Puerto Rico into a blackout on Sunday as catastrophic flooding unfolded across the U.S. territory. 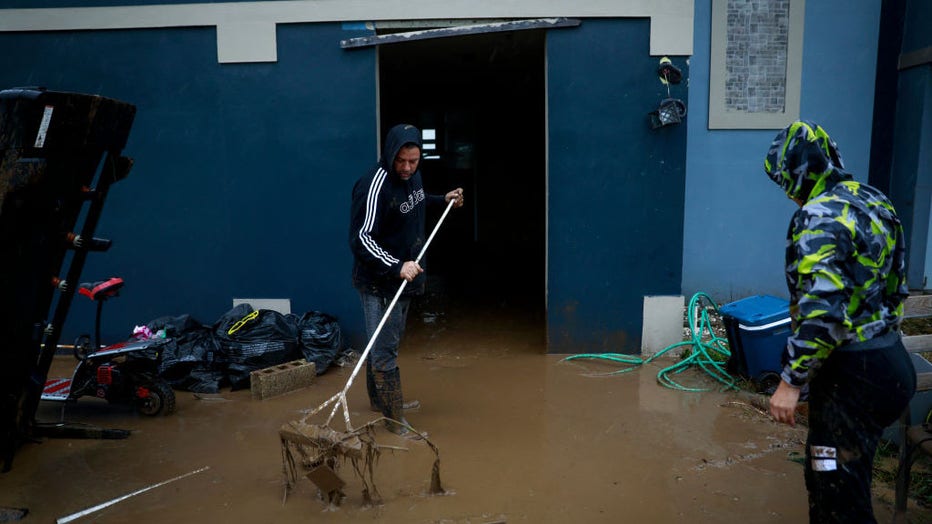 Members of the Nevares remove the mud from their home after La Plata river overflooded and their two-story house was almost completely submerged on September 19, 2022, in Cayey, Puerto Rico. (Photo by Jose Jimenez/Getty Images) 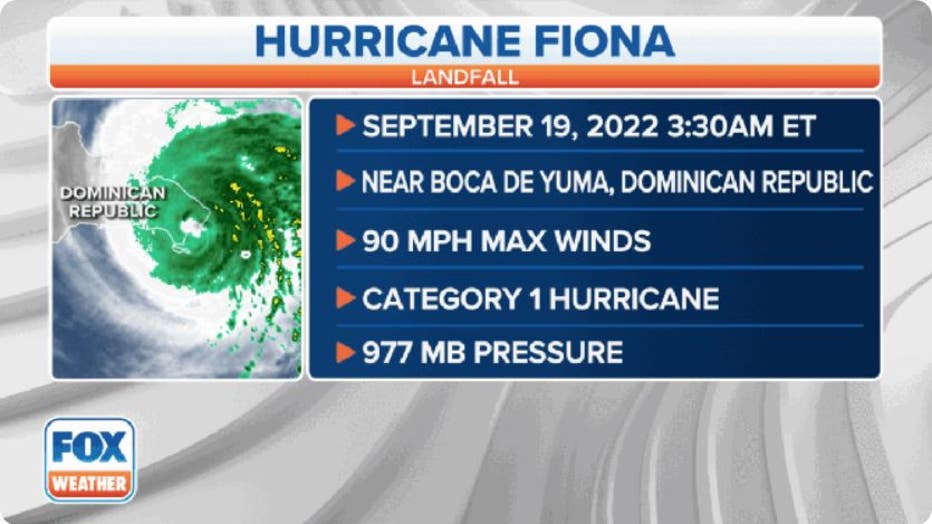 Hurricane Fiona made its first landfall in southwestern Puerto Rico on Sunday, Sept. 18, followed by a second landfall in the eastern Dominican Republic on Monday, Sept. 19. (FOX Weather)

Where is Hurricane Fiona?

As of Tuesday afternoon, Fiona was a Category 3 hurricane centered about 30 miles north-northeast of North Caicos Island and a little more than 800 miles south-southwest of Bermuda. It was moving north-northwestward at 9 mph.

Any hurricane that is rated Category 3 or higher on the Saffir-Simpson Hurricane Wind Scale is defined as a major hurricane.

WHAT'S THE DIFFERENCE? TROPICAL DEPRESSION VS. TROPICAL STORM VS. HURRICANE 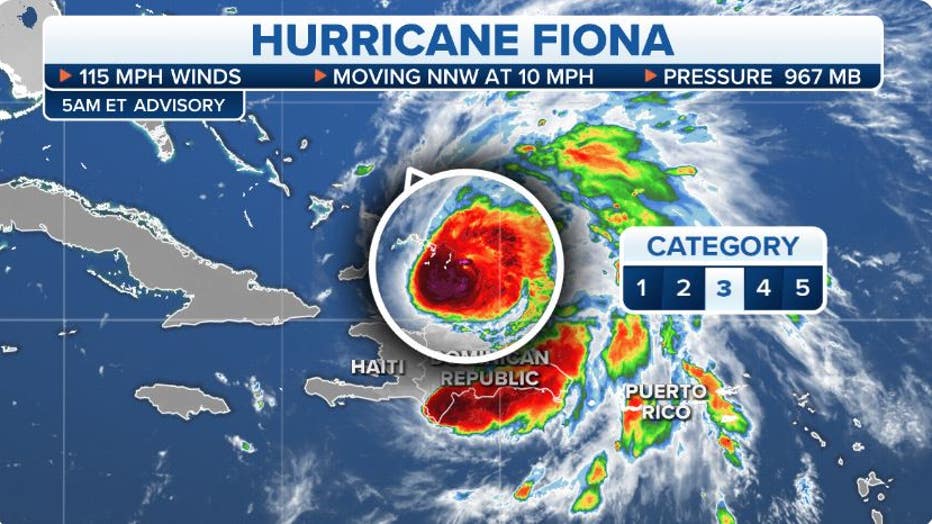 Where are watches and warnings in effect? 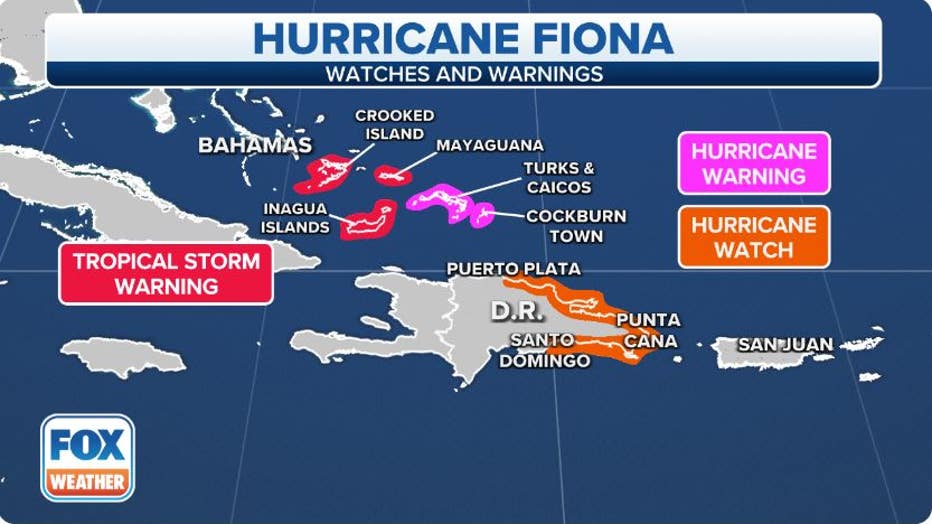 Watches and warnings are in effect along the path of Hurricane Fiona. (FOX Weather)

What is the forecast for Hurricane Fiona?

According to the FOX Forecast Center, the center of Hurricane Fiona will move past the eastern Turks and Caicos on Tuesday, away from those islands by Wednesday, then approach Bermuda late Thursday or early Friday.

Hurricane-force winds (74-plus mph) and heavy rain around the center of Hurricane Fiona will impact the Turks and Caicos through Tuesday afternoon with a continued risk of life-threatening flooding. Tropical-storm-force winds (39-plus mph) and heavy rain from Fiona's outer rainbands are also spreading into parts of the southeastern Bahamas and will continue into Tuesday night. 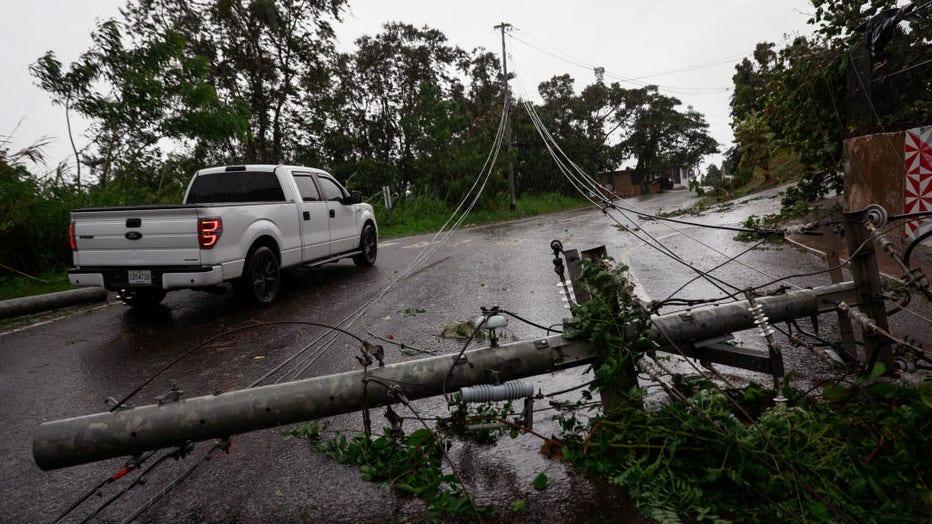 Hurricane Fiona will continue to strengthen over the next couple of days and is now expected to become a Category 4 hurricane by late Wednesday. It will move toward the north-northwest through Tuesday before making a northward turn Tuesday night or Wednesday.

Fiona's high winds will also send large waves toward the U.S. East Coast toward the end of the week, increasing the risk of life-threatening rip currents along the Atlantic beaches. 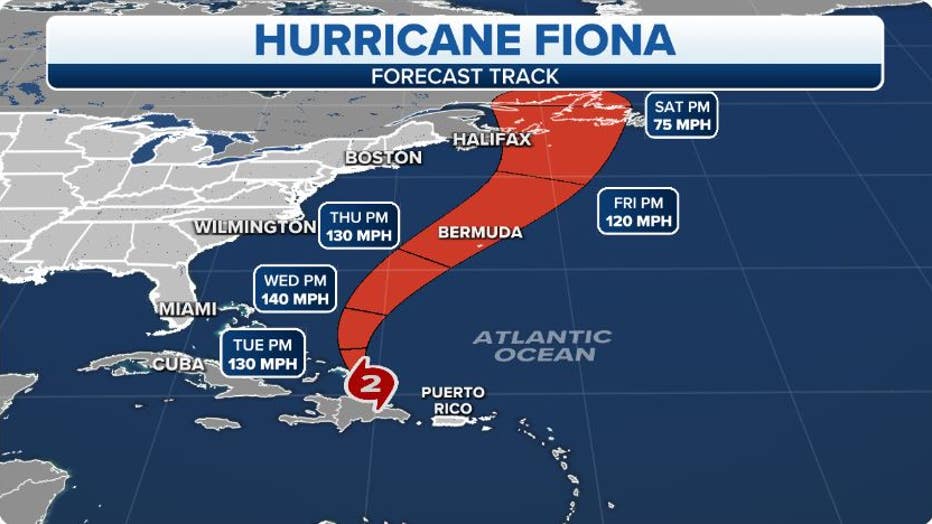 The projected path and intensity of Hurricane Fiona. (FOX Weather)

How much more rain will Hurricane Fiona produce?

Puerto Rico bridge washes away as Hurricane Fiona roars through

A bridge over the Guaonica River in Utuado, Puerto Rico, was washed away by surging floodwaters due to Hurricane Fiona. (Credit: Jean Carlos Velez Roman via Storyful)

An additional 4 to 8 inches of rain is expected across the Turks and Caicos Islands as Hurricane Fiona impacts the British overseas territory, posing a continued risk of life-threatening flooding.

Farther north, the southeastern Bahamas are forecast to pick up 1 to 4 inches of rain.

Additional rainfall amounts between 1 and 4 inches are also predicted across Puerto Rico and the Dominican Republic, where additional localized life-threatening flash flooding remains a concern. Flood Watches remain in effect for all of Puerto Rico and the U.S. Virgin Islands through Tuesday evening.

Later this week, Bermuda could receive 1 to 3 inches of rain from Hurricane Fiona. 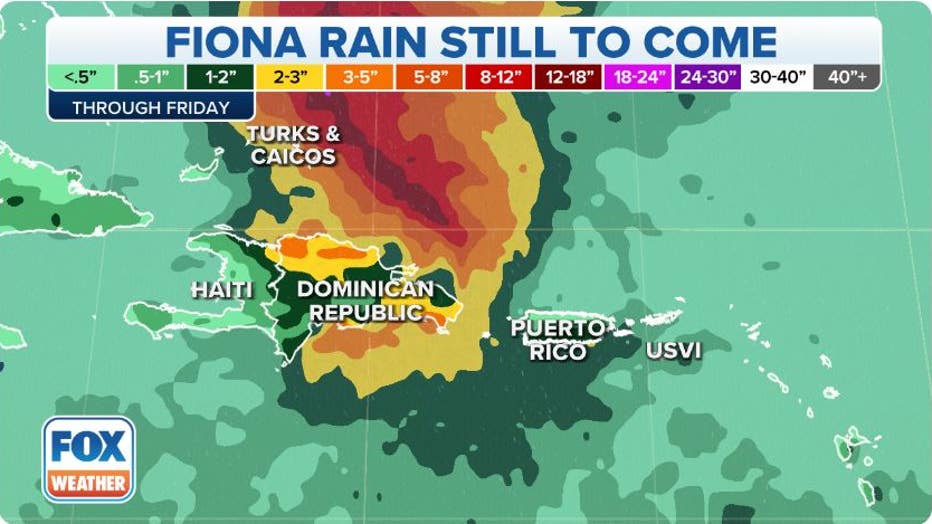 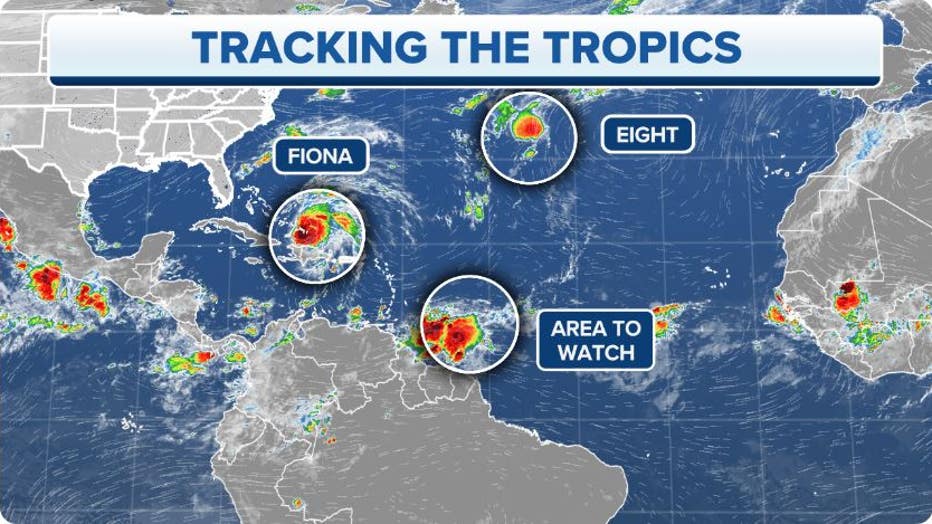 An overview of the tropics in the Atlantic Basin. (FOX Weather)