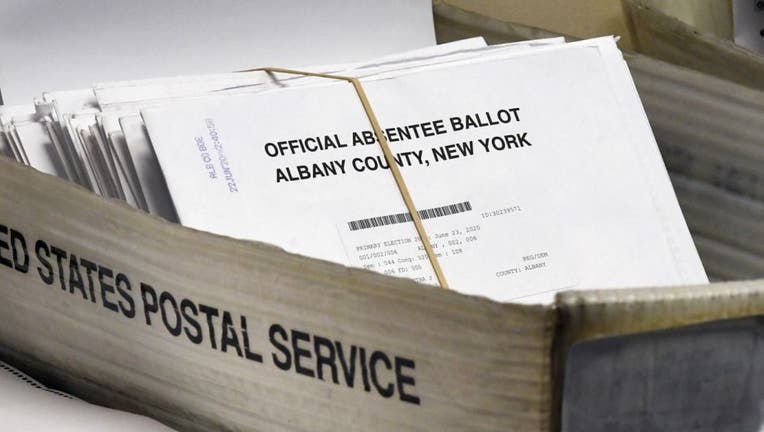 Absentee ballots wait to be counted at the Albany County Board of Elections in Albany, N.Y., June 30, 2020. (AP Photo)

NEW YORK (AP) - The U.S. Postal Service must live up to its responsibilities to timely process election mail by treating it as a priority, a New York judge ordered on Monday, adding that the agency's workers should be permitted to make extra deliveries and work overtime near the November presidential election.

Marrero gave both sides until noon Friday to settle the case in a manner consistent with his findings.

If they fail, Marrero said he'll impose an order that ensures postal workers can make late and extra trips as well as work overtime in late October and early November.

"The right to vote is too vital a value in our democracy to be left in a state of suspense in the minds of voters weeks before a presidential election, raising doubts as to whether their votes will ultimately be counted," Marrero said. He ruled after conducting a hearing on Wednesday.

The policy let trucks leave postal facilities on time regardless of whether there was more mail to load. States also sought to force the Postal Service to treat election mail as first-class mail.

The controversy regarding mail delivery arose as many more voters prepared to vote by mail this November because of the coronavirus pandemic. Multiple lawsuits have been filed.

Amid a growing controversy, Postmaster General Louis DeJoy, a major donor to Trump and the GOP, suspended some changes that threatened to slow election mail, including the removal of iconic blue mailboxes in many cities and the decommissioning of mail processing machines. But he refused to reinstall the machines.

Marrero said Trump and DeJoy have made statements that give "rise to management and operational confusion, to directives that tend to generate uncertainty as to who is in charge of policies that ultimately could affect the reliability of absentee ballots, thus potentially discouraging voting by mail."

"Conflicting, vague, and ambivalent managerial signals could also sow substantial doubt about whether the USPS is up to the task, whether it possesses the institutional will power and commitment to its historical mission, and so to handle the exceptional burden associated with a profoundly critical task in our democratic system, that of collecting and delivering election mail a few weeks from now," Marrero said.

Messages seeking comment were left with spokespeople for the Postal Service.

A message for comment was also left with the U.S. Justice Department.