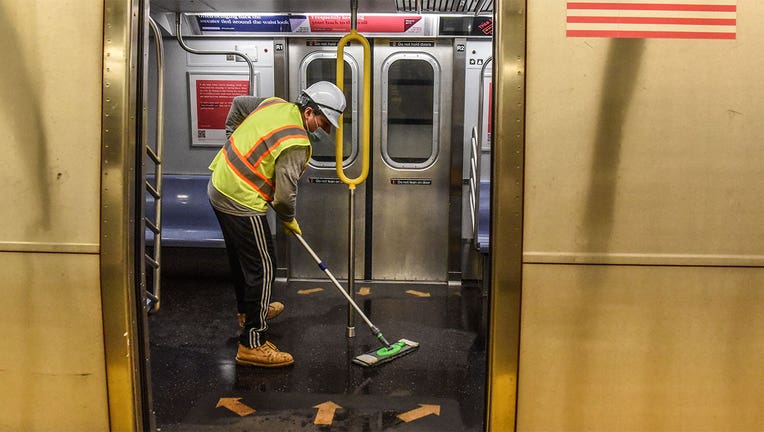 NEW YORK - One by one, the fears creep in as Aura Morales rides the bus to her job at CVS in Los Angeles. A passenger boards without a mask but she doesn't dare confront him. More riders board and it's impossible to stay six feet apart. Driving to work isn't an option; Morales can't afford a car, especially after her work hours were cut.

As the coronavirus rages across the U.S., grocery workers, health care professionals, university staffers, cleaning crews and others who don’t have the option to work from home must weigh safety against affordability when deciding how best to commute to their jobs.

Those who can have ditched public transportation and drive to work instead, contributing to a boon in used car sales in the U.S., which spiked to their highest level on record in June, according to Edmunds.

Meanwhile, public transit agencies have seen ridership plummet, not only because of all the people opting for cars but also so many are now working from home or have lost their jobs altogether. Transit ridership fell 62% nationwide in the third quarter compared to last year, according to the American Public Transportation Association. Heavy rail fared even worse, dropping 72% in the third quarter.

The San Francisco Municipal Transportation Agency warned that without an influx of cash it would have to lay off up to 1,226 full-time workers, or 22% of its workforce, and provide just 35% of the service it offered before the pandemic. New York’s transit agency proposed slashing subway and bus service by 40%, cutting commuter rail service in half and laying off nearly 9,400 positions. Washington D.C.’s transit system warned of layoffs and shorter hours as federal financial assistance dries up.

“It really is survival mode for the industry, or we’re going to see dramatic reductions in their service deliveries, which would really be counter-productive,” said Paul Skoutelas, APTA’s President and CEO. "Essential workers rely on public transit by and large, and we can’t let them down.”

In September, 71% of U.S. workers across all sectors were commuting to physical workplaces while 29% were doing their jobs remotely, according to a survey of 1,015 employed adults by the University of Chicago Harris School of Public Policy and The Associated Press-NORC Center for Public Affairs Research.

Those relying on public transit have already seen schedules cut since the start of the pandemic in March, leading to packed crowds on fewer buses and trains. Mounting tensions over lax social distancing and mask-wearing as coronavirus cases spike have only made their commuting experience worse.

Hipolito Andon, 44, rides the subway to Rockefeller Center in Manhattan where he works as a porter cleaning and maintaining the building. He and his wife, who takes a bus to her school cooking job, are diabetic, increasing their risk of complications if they catch COVID-19. Andon’s son takes public transit to a porter job as well. As soon as they get home, everyone showers and changes clothes.

As the pandemic has dragged on, Andon sees more people boarding trains without masks.

“You hear people muttering, ‘Why is this guy not wearing a mask?’ But there’s no confrontation. People just move away,” Andon said.

$50 fine for refusing to wear a mask on subways, buses

Commuters who refuse to wear a mask on New York City subways, trains, and buses could face a $50 fine starting Monday.

Alexandra Fee chose her apartment in Arlington, Virginia based on its proximity to the buses. But when the 28-year-old was confronted with returning to her job as a university academic adviser, she plunked down cash for a used car after noticing the full buses that passed by her home, sometimes skipping her stop because they had reached capacity.

“If I plan on catching a bus at a certain time and they were too full that morning, would I then have to wait a half-hour for another bus?” Fee wondered.

Dozens of cities worldwide, including Paris and London, saw traffic rebound to pre-pandemic levels in September despite the fact that many major employers were keeping their workforces at home, according to Inrix, a company that analyzes traffic data. In the U.S., traffic in smaller cities from Colorado Springs to Knoxville, Tennessee surpassed pre-pandemic levels during the morning commute. In the Seattle region, transit use was down 70% while the amount people drove was down just 20%, according to Inrix.

“What in many ways the pandemic did, in terms of automobile ownership and people’s general use of various forms of mobility, is it reaffirmed the value of owning the means of transportation, especially in times of crisis,” said Stephen Beck, founder and managing partner of cg42, a management consulting firm.

Parking lots are also filling up on weekday mornings in parts of New York, according to SP+, which operates more than 200 parking lots in the city. Revenue from lots near entertainment venues and hotels was down in early November but revenue from lots where cars arrive by 10 a.m. on weekdays was up 4% to 10% compared with pre-pandemic levels, said Jeff Eckerling, chief growth officer at SP+.

“Sitting here today, compared to where we were, this is great,” he said.

For the millions of others riding subways, buses and trains daily, they must set aside their fears in order to get to work.

Sule Sokoni, a porter at a co-op building on Manhattan's Upper West Side, positions himself on his one-and-a-half-hour subway ride so he can see who's getting in and out, and will switch cars if someone boards coughing or without a mask instead of dozing off for the long ride. He's converting a bicycle into an electric bike so he can ride it to work instead.

Indeed, bike-sharing has become a more attractive alternative to public transit during the pandemic. Lyft saw its shared bike rides increase by 12% in Chicago this fall compared to the same time last year, and by 7% in New York.

Uber is also trying to capture wary commuters, offering van services and shared rides to employees who work for the same company. The number of businesses using Uber's commuting products doubled from the start of the pandemic to September, said Ronnie Gurion, global head of Uber for Business.

“More and more companies are really looking for and thinking about how do I get more involved in the commute needs of my employees,” Gurion said.

Most workers are on their own, however, taking calculated risks.

In New York’s Bronx, two dozen passengers crowded together on a recent day to board a cross-town bus with nearly every seat full during the evening rush. Riders wore masks, but once inside, many sat just inches apart from each other.

Virginia Rodriguez hung back on the sidewalk, checking her smartphone to see when the next bus would arrive, hoping it would be less crowded as she headed home from her hospital job handling insurance.

“It’s stressful in the sense that you don’t know who’s going to be next to you,” Rodriguez said. “I try to keep my distance, and keep my mask on at all times. There’s nothing else I can do. I just hope I don’t get sick.”