The FBI says a man from the Bronx became radicalized, married a woman from Alabama, and together they planned to travel to Yemen to fight for ISIS.

Following a multi-year investigation and the help of undercover officers, a husband and wife from New York and Alabama were arrested in New Jersey on Wednesday while allegedly attempting to travel overseas to fight with ISIS, the U.S. Justice Department said Thursday.

James Bradley, 20, of Bronx, New York, and Arwa Muthana, 29, of Alabama, were arrested at a seaport in Newark and charged with attempting to provide support to a designated foreign terrorist organization.

Bradley "allegedly pledged devout allegiance to ISIS, expressing his desire to 'fight among the rank[s] for the Islamic State,'" U.S. Attorney Audrey Strauss for the Southern District of New York said in a statement.

Bradley had also discussed attacking the U.S. Military Academy at West Point, N.Y., or another place where military recruits would train, along with his wife, who has allegedly also pledged her support to ISIS, Strauss said.

The couple planned to travel to Yemen aboard a cargo ship in an attempt to stay away from law enforcement, Strauss said.

"As Bradley suspected, he and his wife were indeed on law enforcement's radar — he was confiding in and planning their journey for terror with an undercover officer — and their plans to wage attacks against the United States have been thwarted," she said.

Both Bradley and Muthana are charged on two counts of attempting and conspiring to provide material support to a designated foreign terrorist organization. Both charges carry a maximum sentence of 20 years in prison. 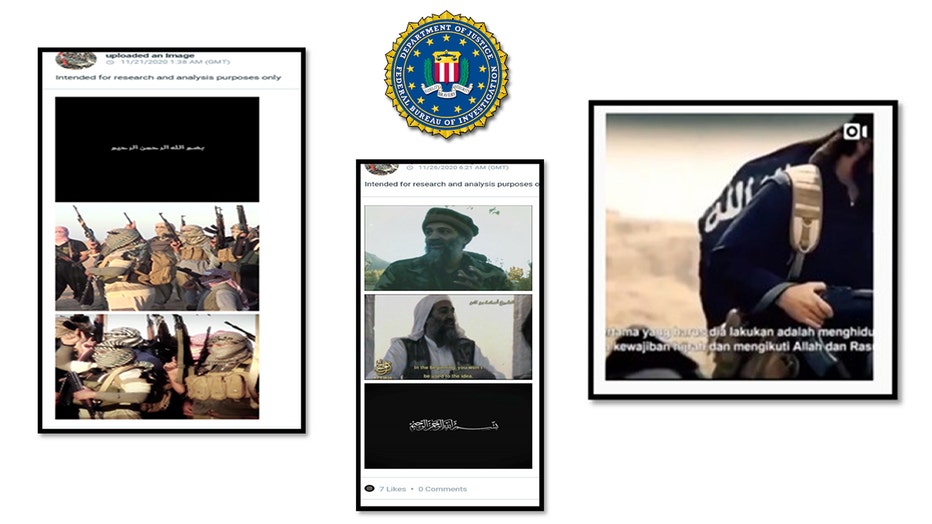 The FBI included these screenshots from the social media posts of a suspect to support the claim that he espoused terrorist ideology. (Via U.S. Justice Department)

"The threat of terrorism at home and abroad remains, and the National Security Division is committed to holding accountable those who would provide material support to foreign terrorist organizations," Assistant Attorney General John C. Demers said in a statement. "I want to thank the agents, analysts, and prosecutors who are responsible for this case."

Last May, Bradley allegedly told an undercover officer he thought ISIS was good for Muslims because it is attempting to establish a caliphate and also said he might do "something" at a U.S. military training academy if he wasn't able to get out of the U.S.

In January, he allegedly told the same undercover officer, in his cause for jihad, he was considering using his truck to take "out" Reserve Officer Training Corps (ROTC) cadets he saw at a university in New York with the help of his wife.

After the couple met up in New York in early March, Bradley allegedly contacted the undercover officer for help getting on a cargo ship to the Middle East. The officer put them in contact with someone who could help who was actually another undercover officer.

They were arrested Wednesday as they attempted to board the ship.

"Both are accused of betraying this country and will now face the consequences of these actions in the U.S. justice system," Assistant Director Jill Sanborn of the FBI's Counterterrorism Division said in a statement.

Muthana allegedly told officers after her arrest that she was willing to "fight and kill Americans if it was for Allah," the release said.

Muthana is the sister of Hoda Muthana, who left the U.S. in 2014 to become an ISIS bride, according to AL.com. She reportedly said in 2019 that she "regrets" joining ISIS after surrendering to coalition forces, but a U.S. judge ruled that year she wouldn't be allowed back in the U.S. because she's not a citizen.

The arrests are "another example of the effectiveness of the undercover operatives, detectives and analysts of the NYPD's Intelligence Bureau working in seamless coordination with our partners at the FBI and the Joint Terrorism Task Force," NYPD Commissioner Dermot Shea said.