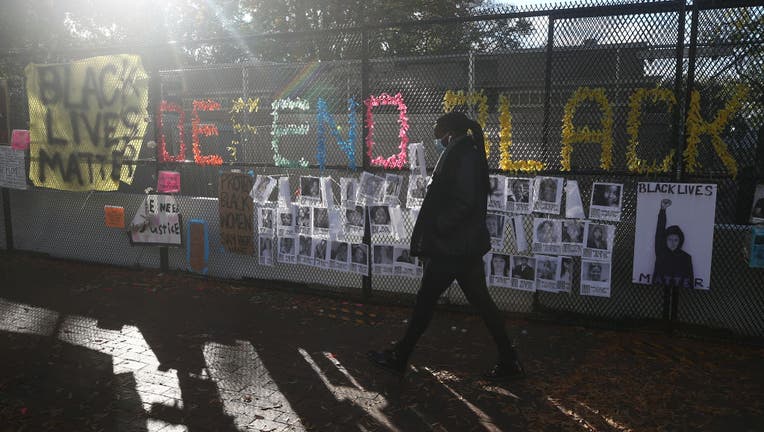 A view of the White House fence facing Lafayette Square and covered with placards of the Black Lives Matter movement. (Photo by Yegor AleyevTASS via Getty Images) (Getty Images)

Then, the troubles of a nation in turmoil landed on Hall's doorstep in suburban Detroit in September when racist graffiti was scrawled on his pickup truck and shots were fired into his home after his family placed a Black Lives Matter sign in their front window.

Some experts say police brutality, the coronavirus pandemic that has taken disproportionate physical and financial tolls on Black people, and other issues around race have increased anxiety levels among African Americans, like Hall.

The attacks on Hall's home were investigated as a hate crime and 24-year-old white neighbor, Michael Frederick Jr., eventually was arrested and charged with ethnic intimidation and other crimes.

“We, as Black people, have all of the normal human stressors — work, family, finances — and then we’re inundated with racial pressure at all levels,” said Jessica Graham-Lopresti, assistant professor of psychology at Suffolk University and co-founder of Massachusetts-based BARE — Black Advocacy Resilience Empowerment.

“This idea that, for Black people, we don’t feel — currently in this country — that we have the ability to control our environment and protect ourselves and our families,” she said. “We could still be gunned down in the street. That creates anxiety. That creates stress.”

In May, mostly white men and women protesting Michigan Gov. Gretchen Whitmer’s orders that closed many businesses and services to stem the spread of COVID-19 openly carried rifles and handguns into the state Capitol.

As many activists take to the streets to maintain public political pressure for change, concern about personal safety is at an all-time high, said Frederick Gooding Jr., an African American studies professor at Texas Christian University.

“Especially in the aftermath of Kyle Rittenhouse walking untouched in full view with an assault rifle AFTER shooting another civilian dead,” Gooding added.

Rittenhouse, a white 17-year-old from northern Illinois, is accused of fatally shooting two white protesters and wounding a third in August in Kenosha, Wisconsin, during demonstrations following the police shooting of Jacob Blake, a Black man. Rittenhouse was among a number of armed white men who converged on the city, claiming they were protecting property from arson and theft.

After the gunfire, with his AR-15-style rifle over his shoulder and his hands in the air, Rittenhouse walked toward police vehicles that kept going past him, even as a witness shouted, “He just shot them!” Police Chief Daniel Miskinis has explained the response as officers dealing with a chaotic scene.

Sharon Bethune, 56, of Fredericksburg, Virginia, said the events in Kenosha angered her and other Black people.

“This is mind-boggling,” said Bethune, a retiree who managed government accounts for the Environmental Protection Agency. “I’ve never seen anything like this.”

For Black professionals and those in the middle class, the anxiety appears to be more pronounced, said Alford Young Jr., a sociology professor at the University of Michigan in Ann Arbor.

They wonder “how we got to this moment of national leadership after the civil rights movement,” Young said. “There is just extreme anxiety and frustration that people would not have imagined that the kinds of issues surfacing now would have followed an Obama presidency.”

Many working class Black people see the current political landscape with less dread and more “the way it's always been,” he added.

Trump, who claims to have done more for Black people than his predecessors, has been accused of using race to stoke division. He has encouraged police to use a heavy-handed approach on people protesting against racism and police brutality. During his first debate with Democratic presidential candidate Joe Biden, Trump refused to condemn white supremacy.

“He’s opened up Pandora’s box with racism and anger and telling police to beat people up,” said Candace Hall, 55, also an Army veteran.

Ciaran O’Connor, spokesman for New York-based Braver Angels, which seeks to depolarize American politics, said people need to talk to each other, not retreat from tough conversations, as they fight for what they believe in.

“We believe in the power of conversation if you are trying to persuade people in a way to humanize people,” O'Connor said. "If we’re gonna bring positive change, we’re going to have to find ways to have these conversations.”