Video showed the final rescue of the last of nine endangered Rothchild’s giraffes from their flooded island in Kenya.

Mission accomplished: The last of nine endangered giraffes were rescued on April 12 from their flooded island in Kenya, concluding a 15-month-long endeavor, according to the Save Giraffes Now organization.

Floodwaters around the giraffes’ home island in Lake Baringo were slowly rising for years, but in 2020, the rate of rising floodwaters increased, "flooding lakeshore homes, businesses, and threatening the lives of the small group of Rothschild’s giraffe on Longicharo Island, in Ruko Community Conservancy," according to a Save the Giraffes Now news release.

Video released by the Northern Rangelands Trust of the final rescue showed Ngarikoni and her calf, Noelle, being tranquilized in order to be ferried to safety without causing the animals further stress. 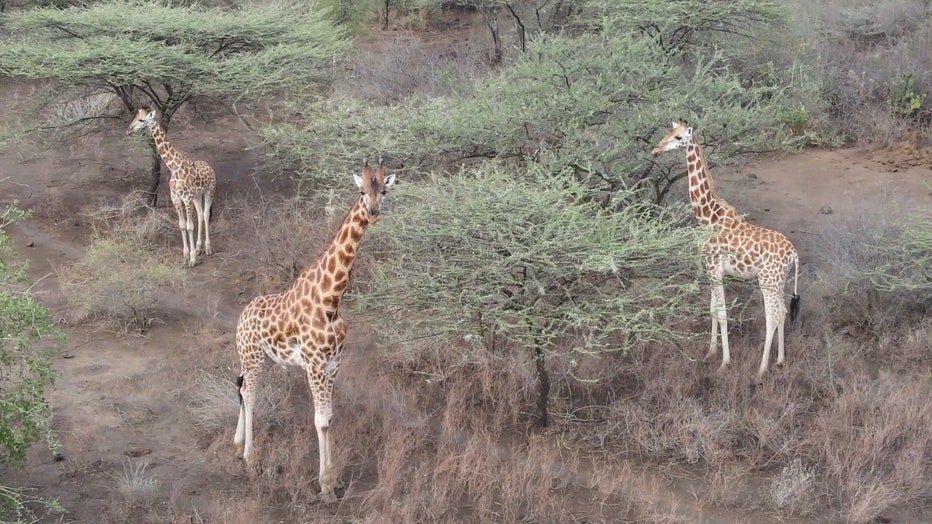 All nine giraffes are pictured in their new home in this screenshot taken from video. (Northern Rangelands Trust via Storyful)

RELATED: Pig rescue sees high number of surrenders after adopters fail to do their research

In the footage, Ngarikoni is seen strolling through the brush as conservationists shoot her with a tranquilizer. She then gallops around as they corralled her to a safe location. Nagarikoni is then seen with a cover over her head as the crew guides her to a barge.

An aerial view shows the giraffe being ferried across the lake to another landmass nearby where she is released and gallops off into the brush once again.

Shortly after Ngarikoni was released, her calf, Noelle, was also released and is seen galloping off the barge to rejoin her mother.

RELATED: Baby deer rescued after being found on road next to dead mother in Brevard County

"We felt a great sense of urgency to complete this rescue," said David O’Connor, president of Save Giraffes Now. "With giraffe undergoing a silent extinction, every one we can protect matters, making this rescue an important step in supporting the survival of this species."

The urgency to relocate the nine giraffes was essential to preserving their species.

"Rothschild’s (Nubian) giraffe are a dwindling subspecies of the Northern giraffe that once roamed the entire western Rift Valley in Kenya and into Uganda. Today, fewer than 3,000 are left in Africa, with only about 800 in Kenya," according to the Save the Giraffes Now organization.

The rescue effort was a collaboration among the nonprofit as well as Kenya Wildlife Service, Ruko Community Conservancy and the Northern Rangelands Trust.

"This incredible achievement involved sketching out the innovative rescue, from designing and building the barge (named "The GiRaft") to creating a 4,400-acre sanctuary on the mainland for the animals," according to a Save the Giraffes Now news release.

Save Giraffes Now is a nonprofit organization that collaborates with over 20 giraffe conservation projects in nine African countries to save giraffes "from extinction by supporting action-oriented projects with immediate impact."