A 27-year-old Texas woman found a 3.72-carat diamond while searching the grounds at Crater of Diamonds State Park in Arkansas.

One of the world’s largest diamonds was unearthed this month in Botswana.

The government announced Wednesday that the rare 1,098-carat gem-quality diamond was presented to President Mokgweetsi Masisi. Officials said the diamond is "the third-largest in the world," following the first- and second-largest diamonds previously discovered in South Africa and Botswana, respectively.

The recent discovery happened on June 1 at the Jwaneng diamond mine, located about 75 miles west of Gaborone — the nation’s capital. It was found in the mine’s South Kimberlite pipe by metallurgy assistant Orakeng Kefentse, officials said.

"The diamond which is the third largest in the world after the first and second that were discovered in South Africa and Lucara Botswana respectively, was discovered on June 1st from Jwaneng mine's South Kimberlite pipe, making it the largest diamond in the company's history since diamonds were discovered in Botswana in 1967," the Botswana government wrote in a tweet. 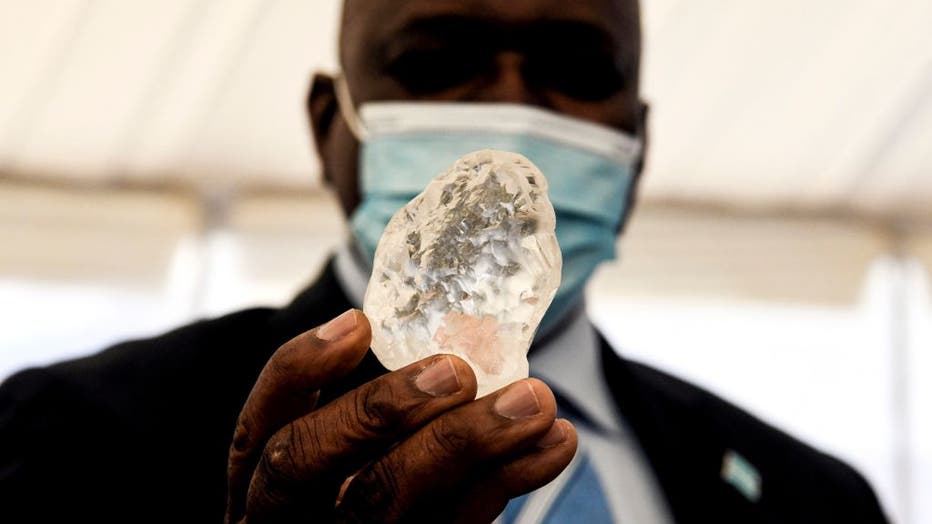 Photos showed the large diamond being presented Wednesday to Masisi and members of his cabinet.

The mine where the diamond was discovered is operated by Debswana, a major mining company with four diamond mines in the country. It is jointly owned by the government of Botswana and the international mining giant De Beers Group, according to Debswana’s website.

Prior to this discovery, the largest gem-quality diamond found at Jwaneng mine was 446 carats in 1993.

Masisi said proceeds from the rare stone will be used "to advance national development in the country," according to the Twitter post.

"Debswana will work with the Government of the Republic of Botswana and De Beers to value and sell the diamond to ensure it returns maximum benefit for the people of Botswana; and will communicate further plans to bring this unique treasure to market in due course," Debswana said in a statement.

The world’s second-largest gem-quality diamond named "Lesedi La Rona" sold for $53 million in 2017. The largest ever unearthed was the 3,106-carat "Cullinan" diamond, discovered in 1905.