Cuomo: Infection rate is in our control

New York Gov. Andrew Cuomo said the loss of life is staggering but that the number of lives saved is also staggering. He said the statisticians couldn't count the spirit of New Yorkers when making their models about the progress of the pandemic.

NEW YORK - The number of people who died due to COVID-19-related causes in New York jumped 777 in one day but the number of people hospitalized stayed relatively flat, the governor announced on Friday. An additional 10,575 cases were reported, bringing the statewide tally to 170,512.

Gov. Andrew Cuomo said he is "cautiously optimistic" that the coronavirus infection rate is slowing.

"Change in total hospitalizations is down, not relative to yesterday, but when it's averaged over the three-day average on the hospitalizations, you see a dramatic decline in those numbers and that's obviously very good news," Cuomo said at his daily briefing in Albany. "Change in ICU admissions is actually a negative number for the first time since we started this intense journey. That means there are fewer people in the intensive units statewide than there were."

The governor said 18,569 people were hospitalized as of Friday. If the rate of new hospitalizations stays flat, Cuomo said, the state may not need the field hospitals that FEMA and the military have been setting up in recent weeks.

"New York is flattening the curve and we have to flatten the curve because when they showed us the projection models of what the statisticians projected the curve would do we had no capacity to meet those projections," Cuomo said. "In other words, Columbia University, who was projecting the highest caseload, said we needed 136,000 hospital beds in New York City when we started... We only have about 33,000 to 36,000 hospital beds in New York City. So, that was obviously distressing to say the least." 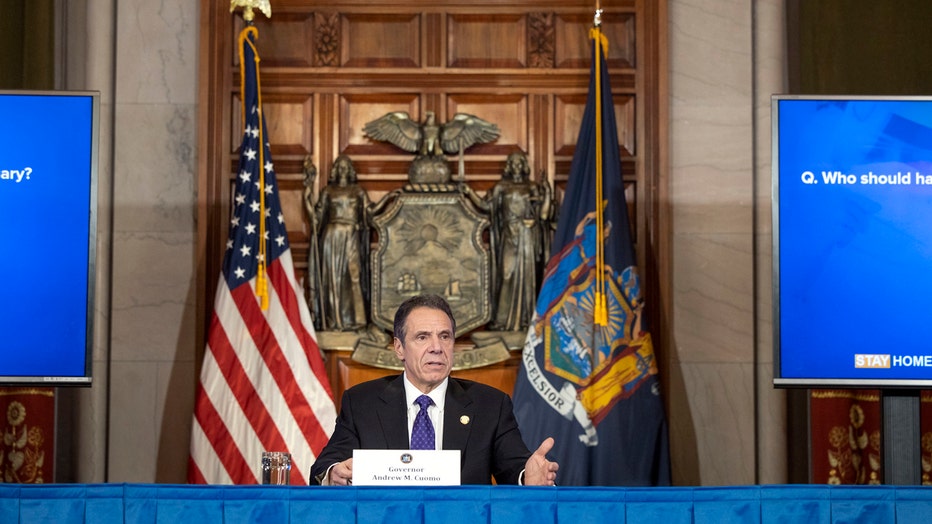 Cuomo praised New Yorkers for, by and large, adhering to his executive orders that shut down so-called nonessential businesses, ordered employers to let their workers do their jobs from home, and called for residents to stay home as much as possible and keep their distance from each other when going outside to get groceries and medications.

The governor pointed to models from McKinsey and IHME that projected anywhere from 55,000 beds to 110,000 beds needed, depending on how fast and how well the state and city, and its people, took action.