Cuomo sought to add another 4,000 temporary hospital beds across New York City and ordered schools closed statewide for two more weeks on Friday, warning of hard days ahead in the coronavirus outbreak.

Gov. Andrew Cuomo wants eight mobile hospitals in all: one each in Manhattan, Bronx, Brooklyn, Queens, Staten Island, Westchester, Nassau, and Suffolk. One is built. Three more are under construction. Cuomo will ask the Trump administration to authorize four more.

A new temporary hospital at the Javits Center is part of the state's plan to quickly bring hospital capacity up from 53,000 beds to 140,000 beds. More temporary hospitals are planned in the suburbs and a Navy hospital ship is due to arrive Monday in New York City, a global hotspot of the outbreak.

Already more than 6,000 COVID-19 patients are hospitalized in New York, with almost 1,600 in intensive care. The state has logged a nation-high of 519 deaths, and has more than 44,000 confirmed cases.

Fearful of still falling short of hospital beds if the outbreak peaks sharply in April, Cuomo is seeking authorization from the Trump administration to add 4,000 beds spread among the Bronx, Brooklyn, Queens and Staten Island. The hospitals would be constructed at a horse track complex, a city college, an expo center and a cruise ship terminal. 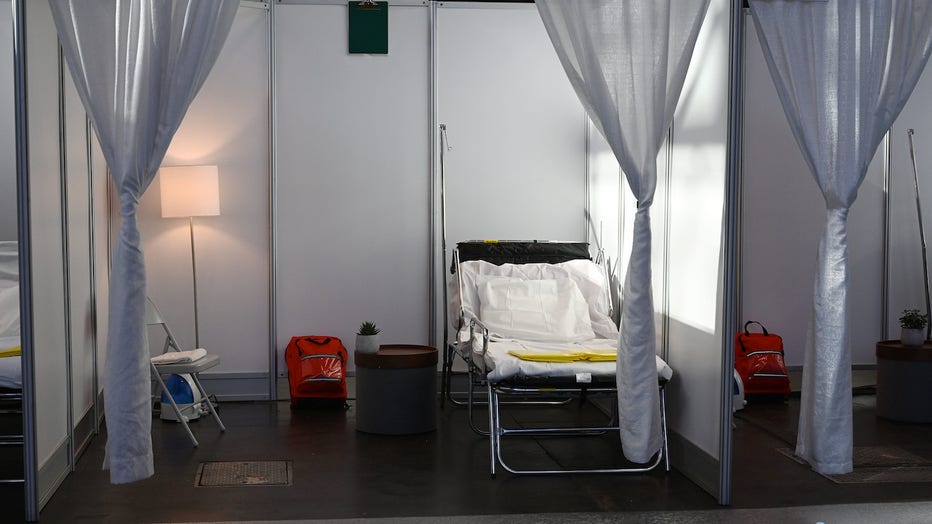 "Were looking far and wide, very creative, aggressive and finding all the space that we can possibly find," Cuomo said.

"I want to have one in every borough. I want to have one for the Bronx, Queens, Manhattan, Staten Island, Brooklyn. One for Nassau, one for Suffolk, one for Westchester, so everybody knows downstate, which is where the essence of the density is right now, that everyone equally is being helped and is being protected."

New York City Mayor Bill de Blasio gave his own grim warning later Friday, saying that Sunday, April 5 will be "a decisive moment for the city" in terms of having enough medical workers, supplies and equipment. The mayor said that while next week will be difficult, he's "very, very worried" about what will happen after that.

The mayor said he shared his concern with President Donald Trump and federal officials.

The governor also ordered schools in New York state to remain closed for another two weeks until April 15. Cuomo two weeks ago had ordered schools closed through April 1 as part of the state's effort to slow the transmission of the outbreak.

New York City schools are closed through April 20, though officials say the city closure could last the rest of the school year.

"I don't do this joyfully, but I think that when you look at where we are, when you look at the number of cases still increasing, it only makes sense to keep the schools closed," said Cuomo, who added he would reassess closures closer to April 15.

Cuomo said he prefers closing schools for two weeks at a time for now, partly over concern that announcing a longer closure could make it harder to reopen schools if the tide changes.

"You are living a moment in history. This is going to be one the moments they write about and talk about for generations," he told guard members. "So I say, my friends, that we go out there today and we kick coronavirus's ass."