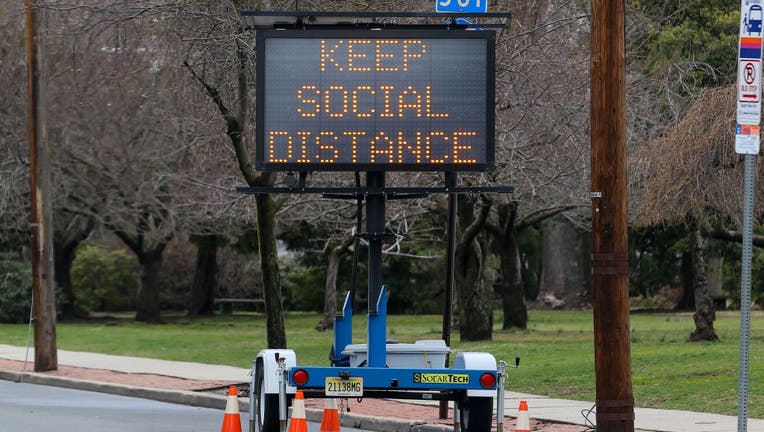 MILLBURN, NJ - MARCH 17: A general view of the sign on Main Street that lets people know that they need to Keep Social Distance on March 17, 2020 in Millburn, NJ. (Photo by Rich Graessle/Icon Sportswire via Getty Images)

Murphy's announcement came on the first day students across the state are staying home as statewide school closures went into effect in an effort to slow the spread of the new coronavirus.

Murphy ordered the school closures Monday, though many schools already were ordering students to stay home.

Health Commissioner Judith Persichilli said the state had identified 260 additional hospital beds that would be available Wednesday, the majority in the northern half of the state where most of the positive cases are centered.

Murphy said drive-through testing would begin in Bergen County, the state's hardest-hit area, by Friday and testing in Holmdel, Monmouth County, is expected to begin next week.

For most people, the virus causes only mild or moderate symptoms, such as fever and cough. For some, especially older adults and people with existing health problems, it can cause more severe illness, including pneumonia, and death.

The vast majority of people recover over a period a weeks.

A closer look at developments in New Jersey:

Two weeks after it reported its first confirmed case of the new coronavirus, New Jersey reported 162 new cases to bring the total to 427. The two patients who died overnight were women in their 60s and had underlying health problems, Persichilli said.

Earlier this week, Murphy banned all official and public gatherings of more than 50 people. On Wednesday, he warned residents that if they plan to hold private gatherings, such as weddings or birthday parties, authorities may be watching.

“This is not a time for anyone to be bringing people together," he said. “We mean it when we say 50 people. We will enforce this aggressively."

In preparation for an anticipated surge of hospital patients, Persichilli said 260 additional beds would be made available by Wednesday, with 199 in northern New Jersey, which has the highest concentration of cases. They are in areas of hospitals that had been closed but can be reopened.

Persichilli said 227 more beds were expected to be made available in the next few weeks.

State health officials have recommended calling your health care provider if you have symptoms, including fever and shortness of breath. Officials also point people to the Centers for Disease Control and Prevention website, which recommends people stay home except to get medical care.

On Wednesday, the state announced a new number residents can call with coronavirus-related questions, to augment the existing hotline operated by the New Jersey Poison Control Center.

The new 211 number is operated by the United Ways of New Jersey and provides information and referral services. Residents also can text NJCOVID to 898-211.

The Associated Press receives support for health and science coverage from the Howard Hughes Medical Institute’s Department of Science Education. The AP is solely responsible for all content. Follow AP coverage of the virus outbreak at https://apnews.com/VirusOutbreak and https://apnews.com/UnderstandingtheOutbreak.