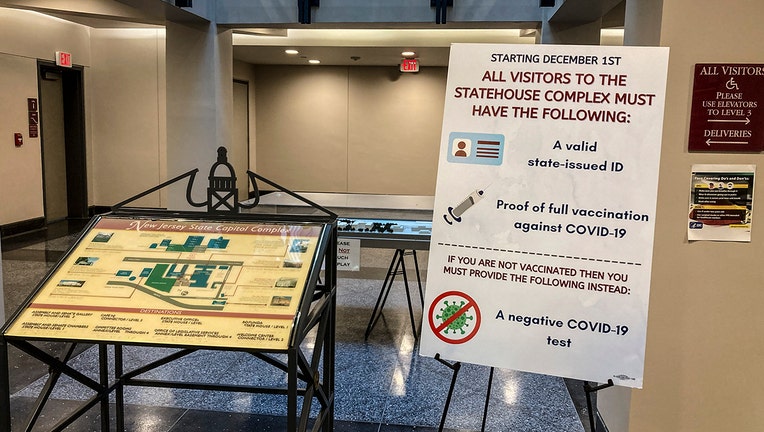 Signs stand around entryways and outside committee rooms at the statehouse in Trenton, N.J., show the requirement for visitors to show proof of COVID-19 or a negative test. (AP Photo/Mike Catalini)

TRENTON, N.J. - New Jersey State Police stepped up enforcement Monday of a requirement that statehouse visitors show proof of a COVID-19 vaccination or a negative test.

Troopers stood guard at entrances around the statehouse complex, including little-used doorways where no state police presence is typically present. Troopers routed visitors — even those with statehouse badges who work in the complex — to a single entrance where they were directed to show vaccination proof and undergo a temperature screening. Later in the day, they put up large orange barriers and put up new signs saying that certain entrances were for lawmakers only, or lawmakers and staff only.

The National Guard helped set up a testing center at the statehouse complex, but were not there for security purposes, according to a statement from Gov. Phil Murphy's office.

The stepped-up enforcement comes after confusion broke out last week when Republican Assembly members defied the requirement and attempted to gain access to the Assembly chamber. After initially blocking lawmakers, troopers permitted them to enter the chamber without showing vaccination proof or a negative test.

The newer security measures also come after Democratic Assembly Speaker Craig Coughlin said last week he was outraged by the Republicans' behavior and called it a "colossal" security failure.

There was still some confusion Monday, though.

Nedia Morsy, the organizing director for the immigrant advocacy group Make the Road New Jersey, was trying to enter the building after having already been inside. She was told by one trooper to go to one entrance only to be told when she arrived to try another.

She said she understood the need for COVID-19 safety but said she was unsure why such a "bottleneck" had materialized. She said the miscues ate up valuable time, as she was working with school-age children on advocating for legislation.

The Assembly Republican caucus posted photos of the new barriers on social media, eliciting a number of critical comments.

"In spite of the staff already proving vaccination or a negative test, the N.J. Statehouse has become a patrolled vaccine checkpoint after Thursday's fight," the GOP Assembly caucus said on Facebook.

State police declined to comment on security measures, according to an emailed statement over the weekend from Trooper Charles Marchan. The statement came in response to questions about why police permitted some legislators onto the Assembly floor Thursday despite not showing the required vaccination proof of a negative test.

The mandate remains in effect even as Senate and Assembly Republicans have gone to court to try to stop it. An appellate division judge last week permitted the GOP motion to advance, but without ruling on the merits. She set a possible hearing date of Dec. 13 in the case.

Monday's Assembly hearings were moved from in-person to remote only, although the Senate held hearings in person.