Obama arrives to give speech at COP26 in Glasgow

Former President Barack Obama waved to the crowd as he got an enthusiastic welcome ahead of his speech at the COP26 climate summit in Glasgow on Nov. 8, 2021. Credit -Oxfam via Storyful

GLASGOW, Scotland - Barack Obama expressed confidence at U.N. climate talks Monday that the Biden administration will ultimately get its $555 billion climate package through Congress, and faulted U.S. rivals China and Russia for what he called a "dangerous lack of urgency" in cutting their own climate-wrecking emissions.

"When it comes to climate, time really is running out," Obama told climate advocates. Though there has been progress since the historic 2015 Paris climate agreement "we are nowhere near where we need to be."

His comments came as conference leaders acknowledged Monday that many key sticking points exist after a week of talks. A trust gap between rich and poor nations on climate change issues emerged when the negotiations went through a check of what's been accomplished and what's left to be done. Developing countries used versions of the word "disappointing" five times when leaders talked Monday about the progress to date.

The U.N. climate conference in Glasgow, Scotland, is the former American president's first since he helped deliver the triumph of the 2015 Paris climate accord, when nations committed to cutting fossil fuel and agricultural emissions fast enough to keep the Earth's warming below catastrophic levels of 1.5 degrees Celsius (2.7 degrees Fahrenheit). 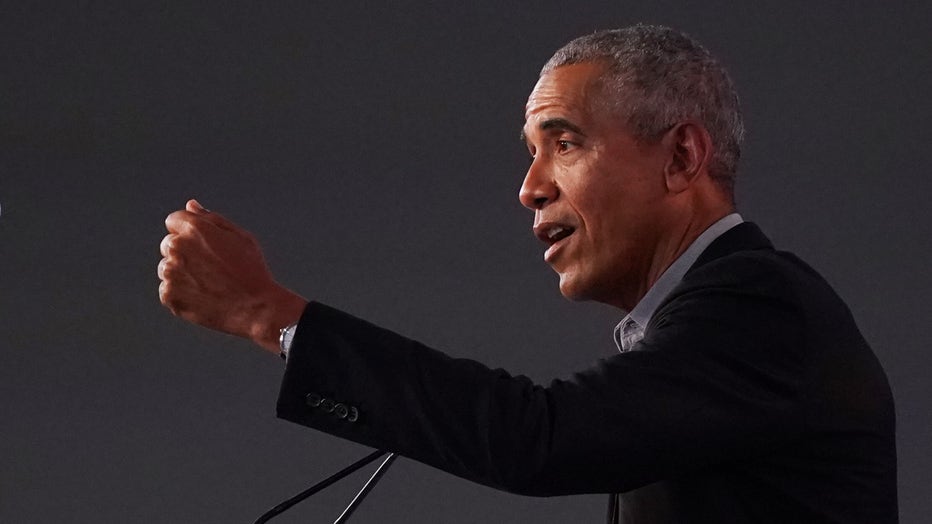 That celebration has faded and been replaced by worry. Donald Trump pulled the U.S. out of the Paris accord. President Joe Biden put America back in as soon as he took office this year but U.S. efforts at fighting climate change were set back years by the Trump move.

Obama's appearance on the sidelines of the talks sought to remind governments of the elation that surrounded the Paris accord, and urge them to announce more immediate, concrete steps to put the 2015 deal into action.

"The U.S. is back and in moving more boldly. The U.S. is not alone," Obama said.

Obama noted efforts by the United States — the world's second-worst climate polluter now after China — stalled when Trump pulled out of the climate accord.

"I wasn’t real happy about that," he admitted, but added that optimism is required to save the planet.

Despite opposition within Biden's own Democratic party that has blocked the climate-fighting legislation, Obama said he was confident that some version of Biden's ambitious climate bill will pass in Congress in the next few weeks.

"It will set the United States on course to meet its new climate targets," he said.

And while in 2015, the rapport between Obama administration negotiators and their Chinese counterparts was seen as paving the way to the global Paris accord, Obama on Monday criticized Chinese President Xi Jinping and Russian President Vladimir Putin for not joining other global leaders at the climate talks in Glasgow.

"It was particularly discouraging to see the leaders of two of the world’s largest emitters, China and Russia, decline to even attend the proceedings, and their national plans reflect what appears to be a dangerous lack of urgency," Obama said.

Obama spoke earlier Monday to a session on Pacific Island nations, including ones whose existence is threatened by rising oceans under climate change.

When he was briefing the U.N. climate conference (COP26) on the first week’s progress, COP26 President Alok Sharma had to correct himself about the number of issues settled, changing "many" into "some."

No deals have been made yet on three main goals of the U.N. conference. Those are pledges to cut emissions in half by 2030 to keep the Paris climate deal’s 1.5 degree Celsius temperature limit goal alive; the need for $100 billion annually in financial help from rich countries to poor ones; and the idea that half of that money goes to adapting to global warming’s worst effects. Several other issues, including trading carbon and transparency, also weren’t solved yet.

Numerous developing nations were pessimistic. They called progress "disappointing" and not near enough, saying announcements on fighting climate change were high in quantity but worried that they were low in quantity.

Representatives of 77 developing nations, along with China, said until this climate conference fixes the financial pledge problem to help poor nations cope with climate change these talks cannot be successful.

"There is a history of broken promises and unfulfilled commitments by developed countries," Diego Pacheco Balanza of Bolivia told the conference.

Scientists say the urgency of global warming is as great as the dire speeches at Glasgow have conveyed, with the planet only a few years away from the point where meeting the goals set in the Paris accord becomes impossible, due to mounting damage from coal, petroleum, agriculture and other pollution sources.

The last few days have seen huge protests in Glasgow and around Europe for faster action in fighting global warming.

Obama told young people "you are right to be frustrated," but then relayed the advice his mother gave him when he was young.

"Don’t sulk. Get busy, get to work and change what needs to be changed," he said. "Vote like your life depends on it — because it does."