Gov. Ned Lamont announced that almost all pandemic restrictions on businesses will be phased out in May.

The announcement came as the state surpassed 8,000 COVID-associated deaths.

Beginning May 1, outdoor restrictions will be lifted on businesses, such as mask-wearing when social distancing can't be observed. Also, the rule that alcohol can't be served without food will be lifted, essentially allowing outdoor bar service.

Additionally, table seating outdoors will no longer be limited to eight people and business curfews will be moved back to 12 a.m.

"I think these are all ways we have earned the right to get back to our new normal," said Lamont, who urged people to still "continue to be cautious with the mask."

Beginning May 19, all remaining business restrictions will end, including capacity limits on movie theaters. The state Department of Public Health will issue recommendations for the safe operation of indoor and large outdoor events, such as concerts and sporting events. The move comes about one year after the state began the process of reopening after strict pandemic-related closures. 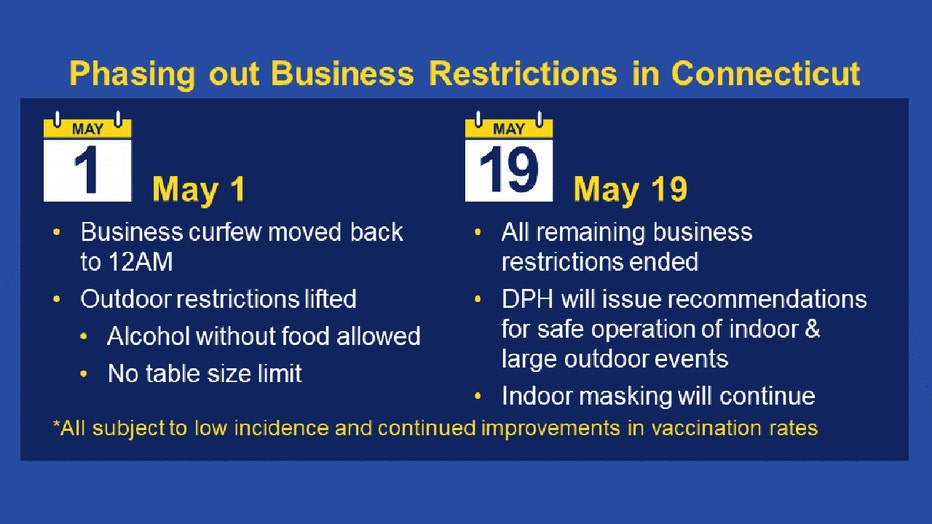 Lamont said the lifting of business restrictions is subject to a low infection rate and continued improvements in vaccination rates. If issues develop, he said the plan could change.

As of Monday, 1.1 million residents have been fully vaccinated. That figure accounts for 61% of people 18 years and older. Meanwhile, the state continues to see more infections. There were 2,700 more reported since Friday, while the number of hospitalizations increased by eight to 494. The number of deaths increased by 19 to a total of 8,014.

Yale University has joined a growing list of colleges and universities that will require students to received the COVID-19 vaccine before returning in the fall.

University President Peter Salovey and Provost Scott Strobel made the announcement Monday in an email to the Yale community, urging students to get inoculated as soon as possible.

"Although the course of the COVID-19 pandemic over the coming months remains uncertain, vaccination is the strongest tool for preventing transmission of the virus," the officials wrote. "There is abundant evidence of the vaccines’ effectiveness and growing confidence that vaccines will be widely available by early summer."

Salovey and Strobel said there will be reasonable exceptions made for religious or medical reasons. They said the school will vaccinate any students in the fall who could not get access to the vaccine this summer. The school announced Friday that Yale Health had secured enough doses for all students to receive Pfizer vaccines over the coming weeks.

The school still is evaluating whether to impose a similar mandate on faculty and staff, with a decision expected in June.

Yale's announcement came the same day that leaders from several other colleges and universities across the state joined Lamont to announce they expect most classes and other activities, including watching sports, will go back to being in-person in the fall.

The leaders said they expect that some protocols, including wearing masks while indoors and staying 3 feet (1 meter) apart in classrooms, will remain in effect.

"We're going to reduce the restrictions by a longshot, (but) of course we're the following state guidelines in the fall," Quinnipiac University President Judy Olian said.

Those leaders said they would be encouraging students staff, and faculty to get vaccinated and will host vaccination clinics, but do not plan to mandate the shots.

Lamont said he approved of that approach.

"We'll find out later in the year if that's enough and we'll be able to make some determinations later," he said.