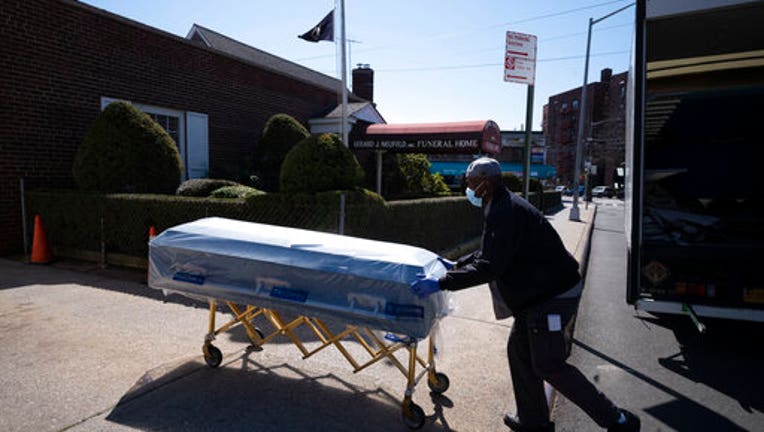 But the work doesn't stop, not at the funeral home near a Queens hospital that has been hit hard by patients suffering, and some dying, from COVID-19, the disease caused by the coronavirus that is sweeping the globe.

“We're right there in the middle of the epicenter," said Joseph Neufeld Jr., who along with his father is the funeral director at Gerald J. Neufeld, which has been operating since 1940.

In just the past week, the home has held services for close to a dozen people who have died from the virus, and is expecting to do more.

COVID-19 has been devastating to New York state, with more than 500 deaths as of Friday and over 44,000 confirmed cases, most of them in New York City. In Queens, Elmhurst Hospital, near the funeral home, has born the brunt of the virus's damage in New York and saw 13 deaths in one 24-hour period this week.

While in most people, it causes mild or moderate symptoms such as fever and cough, it can cause severe illness and lead to death for some, especially older adults and people with existing health problems.

And for those who lose their loved ones, funerals in the age of self-quarantine and social distancing are a far cry from the rituals of collective mourning that took place even a few weeks ago.

“Unfortunately, the families don't necessarily get the closure that they want," Neufeld said. “Some have looked for services here, but we have to limit it to, say, an hour or two, really no more than 10 or 12 people. We try to only have one service on at a time so that you don't spread it even more.”

Fears of exposure linger even after death, with family members opting for closed caskets.

“It doesn't necessarily provide them the closure that they're looking for," Neufeld said. “They want to see their mother or their grandmother or dad one last time. But they also are afraid. ... They end up just having a closed casket, which they otherwise wouldn't normally do. So it's just it's upsetting to them that they don't get to see their loved one one last time.”

It even interferes with the religious ceremonies that different faith communities would normally partake in, said Joseph Neufeld Sr.

“Some of the religious families that we're dealing with, the Buddhists and the Hindus, part of their ceremonies to say a final goodbye at the crematory and push the button to start the flame for the cremation. ... They're barred from doing that," he said. “I feel bad for them."