NEW YORK - Burning police vehicles, police buildings threatened, and chemicals fired at crowds, like protests in cities across America, New York City saw a violent reaction to the death of a black man at the hands of a white police officer.

More than 200 people were arrested, including one person who faces attempted murder charges for throwing a lighted Molotov cocktail into a marked police vehicle that four officers were inside.  Many NYPD officers were injured in different incidents during the protests.

At a news conference on Saturday morning, Commissioner Dermot Shea said that "countless" officers were hurt and many remained hospitalized.

In Brooklyn, activists who had marched from Manhattan chanted insults at officers lined up outside the Barclays Center and pelted them with water bottles. Some were filled with urine.  Police sprayed an eye-irritating chemical into the largely diverse crowd multiple times, then cleared the plaza.

Blocks away, a shouting mob of protesters, some wearing helmets and carrying makeshift shields, advanced on officers shouting and throwing objects, and police retaliated with batons and arrests, leaving the roadway strewn with debris.

Multiple arrests, skirmishes and even a die-in marked the second night of protests in New York City over the death of George Floyd, police brutality and racial injustice.

The police department said among the injuries to officers were several that had teeth knocked out.

The demonstrations were held in defiance of a ban on gatherings, imposed to stop the spread of the coronavirus, which has killed thousands of New Yorkers including dozens of members of the NYPD.

“It’s my duty to be out here,” said Brianna Petrisko, among those demonstrating earlier in the day in lower Manhattan.

“Our country has a sickness,” Petrisko said. “We have to be out here. This is the only way we’re going to be heard.”

Protests around George Floyd’s death have taken place around the country and were not quelled by the news Friday that the Minneapolis officer recorded kneeling on his neck would face criminal charges.

In a night of unhinged emotion, a police vehicle in Brooklyn that had been set on fire was left with "dead cops" scrawled on the hood as a protester tried to smash a door off of it.

New York State Senator Zellnor Y. Myrie and New York State Assemblywoman Diana Richardson both said they were sprayed and handcuffed by the NYPD during the protest.

At another location near Brooklyn's Barclays Center, protesters and police brawled in the street, leaving the street strewn with debris. Protesters also reportedly managed to vandalize the 88th Precinct in Clinton Hill.

Mayor Bill de Blasio said on Twitter that "Our sole focus is de-escalating this situation and getting people home safe. There will be a full review of what happened tonight. We don’t ever want to see another night like this."

New York City Council Speaker Corey Johnson said he was “angry and frustrated” by the events in Brooklyn, and blamed the NYPD for not deescalating the situation.

Numerous people were arrested and police brought in buses to take away prisoners, however in a tweet, the Transport Workers Union Local 100 said that bus operators should refuse to transport any arrested protesters for the NYPD.

Protests around Floyd's death have taken place around the country, with the White House being placed under a brief lockdown and demonstrators spray-painting and breaking windows of CNN’s headquarters in Atlanta.

At his Friday briefing, New York Gov. Andrew Cuomo said he stood with the Minnesota protesters.

“Nobody is sanctioning the arson, and the thuggery and the burglaries, but the protesters and the anger and the fear and the frustration? Yes. Yes. And the demand is for justice,” Cuomo said. 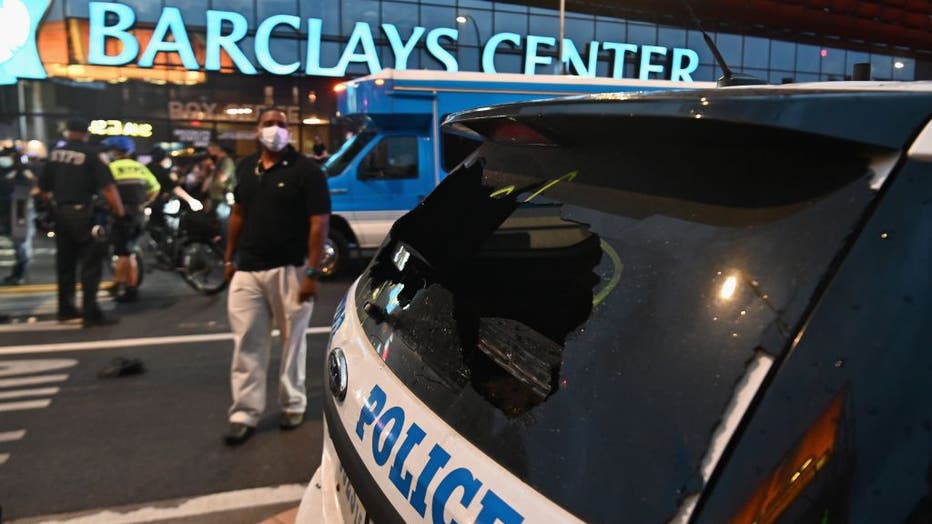 A smashed NYPD car rear windshield is seen during a "Black Lives Matter" protest near Barclays Center on May 29, 2020 in the Brooklyn borough of New York City.(Photo by ANGELA WEISS/AFP via Getty Images)

He also had a message for protesters. “If you are angry with the government, if you are angry with the elected leaders, direct that anger to all of us, because if we haven’t done enough, we are the ones who should be held responsible," he said. “But the police officer in front of you is a working man or woman just trying to do their job.”