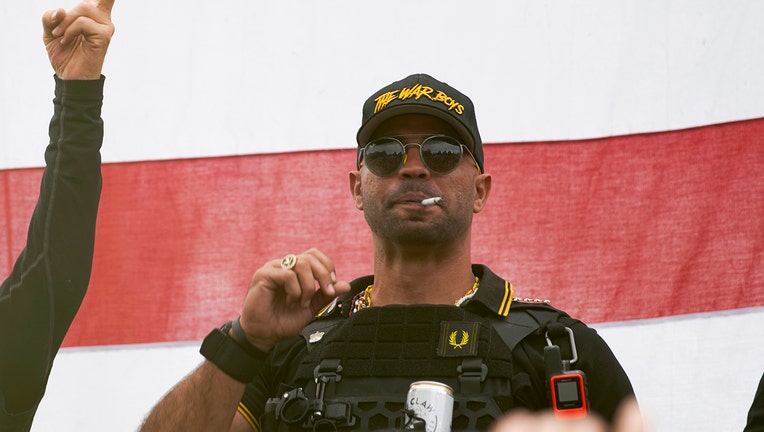 The first public hearing of the U.S. House committee investigating the Jan. 6 Capitol attack is expected to spotlight two far-right extremist groups whose members are accused of plotting for weeks to stop the peaceful transfer of power.

Top leaders and members of the Proud Boys and Oath Keepers have been charged with seditious conspiracy in what authorities have described as an organized effort to subvert the election results and keep former President Donald Trump in office.

Here's a look at the two groups and the accusations against them:

Proud Boys describe themselves as a politically incorrect men's club for "Western chauvinists." Before the Jan. 6 insurrection, Proud Boys members mostly were known for brawling with antifascist activists at rallies and protests.

Less than two months before the 2020 election, group members celebrated when Trump refused to outright condemn the group during his first debate with Democrat Joe Biden. Instead, Trump said the Proud Boys should "stand back and stand by."

The Oath Keepers were founded in 2009 by Stewart Rhodes, a former U.S. Army paratrooper and Yale Law School graduate. The antigovernment group recruits current and former military, police and first responders. Its members pledge to "fulfill the oath all military and police take to 'defend the Constitution against all enemies, foreign and domestic,'" and to defend the Constitution, according to its website.

What Are They Accused of Doing?

Messages and social media posts detailed in court documents show how members of the Proud Boys and Oath Keepers were discussing as early as November 2020 the need to fight to keep Trump in office.

Days after the election, Henry "Enrique" Tarrio, then-chairman of the Proud Boys, posted messages online calling on his followers to fight the results.

"No quarter. Raise the black flag," Tarrio said in one post. In another, he wrote that the Proud Boys would become "political prisoners" if Biden "steals the election," warning that the group "won't go quietly."

"The media constantly accuses us of wanting to start a civil war," Tarrio wrote in another message. "Careful what the f—k you ask for we don't want to start one ... but we will sure as f—k finish one."

Shortly before the riot, an unnamed person sent Tarrio a document that laid out plans for occupying a few "crucial buildings" in Washington on Jan. 6, including House and Senate office buildings around the Capitol, authorities say. The document entitled "1776 Returns" called for having as "many people as possible" to "show our politicians We the People are in charge."

Tarrio was arrested in Washington two days before the riot and charged with vandalizing a Black Lives Matter banner at a historic Black church during a protest in December 2020. He was ordered to stay away from Washington and wasn't at the Capitol on Jan. 6.

Other Proud Boys, however, met at the Washington Monument on the morning of the riot and marched to the Capitol before Trump finished speaking near the White House. As the angry mob swarmed the Capitol, Proud Boys members dismantled metal barricades, and directed and led members of the crowd into the building, authorities say.

The Oath Keepers also spent weeks discussing trying to overturn the election results, laying out battle plans and purchasing weapons, authorities say. Two days after the election, Rhodes told followers in an encrypted group chat to prepare their mind, body and spirit for a "civil war."

Rhodes urged members to go to Washington to let Trump know "that the people are behind him," and expressed hope that Trump would call up the militia to help stay in power, authorities say. Oath Keepers repeatedly wrote in chats about the prospect of violence and the need, as Rhodes allegedly wrote in one text, "to scare the s—out of" Congress.

The group stashed guns in a hotel outside Washington as part of a "quick reaction force" that would come to their aid if needed, prosecutors say. Days before Jan. 6, one defendant suggested getting a boat to ferry "heavy weapons" across the Potomac River into their "waiting arms," according to prosecutors.

On Jan. 6, Oath Keepers wearing camouflaged combat attire were seen on camera shouldering their way through the crowd and into the Capitol in a military-style stack formation. Rhodes isn't accused of going inside the Capitol building, but was seen gathered outside with several Oath Keepers after the riot, authorities said.

Are the Groups Accused of Coordinating with Each Other?

The Proud Boys and Oath Keepers have been charged in separate indictments and the Justice Department hasn't accused them of plotting with one another. But prosecutors have indicated there was at least some communication between the two groups.

In court papers filed last year, a man described by authorities as the leader of the Florida chapter of the Oath Keepers discussed forming an "alliance" and coordinating with the Proud Boys ahead of the riot. Kelly Meggs wrote in a Facebook message in December 2020 that he "organized an alliance" between the Oath Keepers, Proud Boys and Florida Three Percenters, an anti-government movement. Meggs said they had decided to "work together and shut this s—t down."

Prosecutors have also described a meeting between the leaders of the Proud Boys and Oath Keepers in an underground garage in D.C. on the evening before the riot.

Rhodes and Tarrio met in the garage for about 30 mins and one of the meeting's participants "referenced the Capitol," the indictment says. A documentary filmmaker — who was filming Tarrio and is expected to testify at Thursday's House committee hearing — recorded part of the meeting, but Tarrio and others motioned for him to stop. Publicly released video of the meeting doesn't reveal much about their discussion.

Prosecutors argued in a court filing last month that Tarrio's decision to meet with Rhodes "demonstrates that he "remained engaged in planning for Jan. 6" even after his arrest.

What Have the Leaders Said in Defense?

Rhodes has said in interviews with right-wing hosts that there was no plan to storm the Capitol and that the members who did so went rogue. But he has continued to push the lie that the 2020 election was stolen, while posts on the Oath Keepers website have depicted the group as a victim of political persecution.

Oath Keeper defendants have argued in court that the only plan was to provide security at the rally before the riot or protect themselves against possible attacks from far-left antifa activists. Text messages revealed in court documents show Oath Keepers discussing plans to provide security around Jan. 6 for longtime Trump political confidant Roger Stone and "Stop the Steal" organizer Ali Alexander.

Defense attorney Nayib Hassan said Tarrio never instructed nor encouraged anyone to enter the Capitol or to engage in any violence or destruction on Jan. 6. Hassan also described prosecutors' arguments about the garage meeting with Rhodes as "frivolous at best." Tarrio went to the nearby hotel to get information about a potential attorney to represent him in the vandalism case, Hassan said in a court filing.