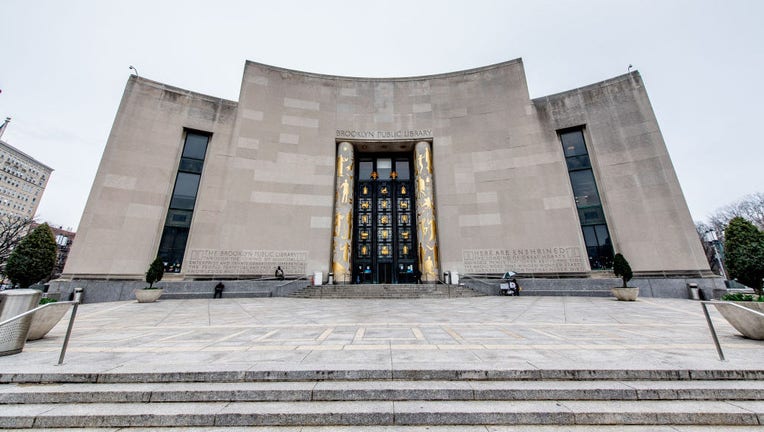 FILE IMAGE - The entrance to the Brooklyn Public Library is pictured in a file image dated March 20, 2020, in New York City. (Photo by Roy Rochlin/Getty Images)

NEW YORK - The Brooklyn Public Library is looking to combat a spike in book bans in the United States by offering its extensive collection for free to teenagers nationwide.

Earlier this month, the library announced its new program called Books UnBanned, which allows those between the ages of 13 to 21 to apply for a free eCard to access its thousands of e-books — no matter where they live.

The library eCard is good for one year and provides access to 350,000 e-books, 200,000 audiobooks, and over 100 databases, the Brooklyn library said. Normally, there is a $50 cost associated with out-of-state cards but the fee is being temporarily waived.

It added that teens will also be connected to their peers in Brooklyn, including members of the library’s Intellectual Freedom Teen Council, "to help one another with information and resources to fight censorship, book recommendations and the defense of freedom to read."

Over the past year, book challenges and bans have reached levels not seen in decades, officials at the American Library Association, the National Coalition Against Censorship (NCAC), and other advocates for free expression have told the Associated Press.

"There are some books with pornography and pedophilia that should absolutely be removed from K through 12 school libraries," Yael Levin, a spokeswoman for No Left Turn in Education, a national group calling for public schools to be "free from indoctrination and politicization," told the Associated Press in March.

The group has called on Attorney General Merrick Garland to investigate the availability of "Gender Queer" among other books.

"Now we’re not talking about a public library or bookstores. We’re talking about K through 12 school libraries, books that are just pornographic and with pedophilic content," Levin added.

According to PEN America, a nonprofit that has been tracking legislation around the country, dozens of bills have been proposed that restrict classroom reading and discussion. Many of the laws focus on sexuality, gender identity or race, it said.

PEN America’s recent report found that there were 1,586 book bans or restrictions set in place in school libraries between July 1, 2021, and March 31, 2022. The report said such districts represented nearly 3,000 schools with a combined enrollment of over 2 million students.

In Missouri, a bill would ban teachers from using "The 1619 Project," the New York Times magazine issue which centers around slavery in American history and was released last fall as a book.

As part of its new program, the Brooklyn Public Library said it would make "The 1619 Project" by Nikole Hannah-Jones available with no holds or wait times for all cardholders — in addition to other "frequently challenged books." Others include: "The Black Flamingo" by Dean Atta, "Tomboy" by Liz Prince, "The Bluest Eye" by Toni Morrison, "Juliet Takes a Breath" by Gabby Rivera, "On Earth We’re Briefly Gorgeous" by Ocean Vuong, and "Lawn Boy" by Jonathan Evison.

"Brooklyn Public Library stands firmly against censorship and for the principles of intellectual freedom—the right of every individual to seek and receive information from all points of view without restriction," Nick Higgins, Brooklyn Public Library’s chief librarian, said in a statement. "Limiting access or providing one-sided information is a threat to democracy itself."

Teens can send a note to BooksUnbanned@bklynlibrary.org to apply for the card, or through the library’s s teen-run Instagram account, @bklynfuture.

The collection of books is available through the Brooklyn Public Library's online catalog or Libby app.