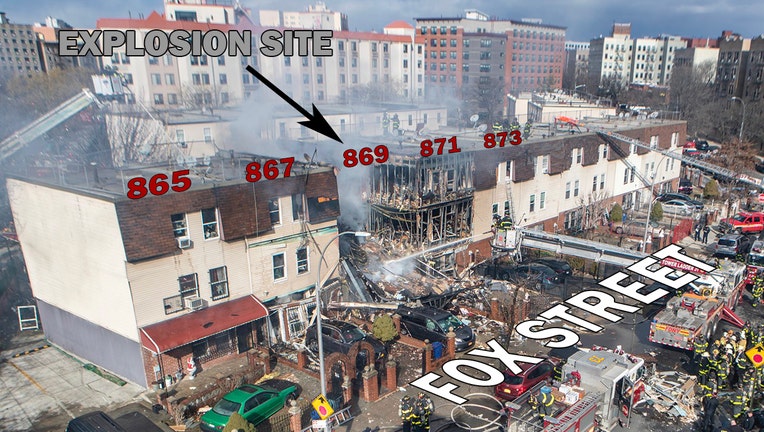 An explosion leveled 869 Fox Street and severely damaged four other homes. Inspectors say 865, 867, 871, and what's left of 869 must be demolished and that 873 is unlivable at this time. (FOX 5 NY Illustration via FDNY Photo)

NEW YORK - An apparent gas explosion and fire that collapsed a townhouse in the Bronx on Tuesday also severely damaged four other homes on the same block, officials said.

The blast in the Longwood section killed Martha Dagbasta, 77, and injured her 68-year-old sister, the NYPD said. The sisters lived at 869 Fox Street, which was leveled in the explosion. The fire spread to the adjacent townhomes.

The Department of Buildings inspected the row of homes on the block and issued full vacate orders for 865, 867, 869, 871, and 873 Fox Street because they were not safe, a spokesperson told FOX 5 NY on Wednesday. The agency also ordered all but one home — No. 873 — to be demolished "in the interest of public safety due to structural instability at the site," spokesperson Ryan Degan said in an email.

In the wake of the building explosion, Con Edison shut down gas service to the immediate area. Service remains suspended for the five homes that are no longer safe to live in, Degan said.

"Inspectors are still on scene and in collaboration with our partner agencies, we are collectively continuing the thorough investigation into this incident," he said.

The American Red Cross is helping the residents of the affected homes to find alternate housing, Degan added.

An explosion severely damaged several homes in the Bronx on Jan. 18, 2022. The NYPD released this video from an officer's body-worn camera showing the bravery of several cops who went into a damaged house to save a woman who was trapped.

The NYPD released dramatic video from an officer's body-worn camera showing how cops bravely responded to the blast and fire. The video shows the officer's point of view as he runs down the sidewalk and into a severely damaged house adjacent to the house that exploded. Officers are seen pulling a couch off a trapped woman and freeing her from the debris.

Five officers were treated for injuries, the department said.

This was the second serious fire in the Bronx in less than two weeks. A faulty space heater ignited a fire at a high-rise apartment building in Fordham Heights on Jan. 9. Smoke from the fire killed 17 people, including 8 children, the medical examiner said. Rapper Cardi B said she will cover the burial expenses for the victims.

Fatal explosion and fire in the Bronx

An explosion destroyed several townhomes in the Bronx on Tuesday morning. One woman was killed and several people were hurt.