The FDA gave approval for the QuickVue At-Home COVID-19 Test, allowing certain consumers to rapidly test themselves for the coronavirus.

LONDON - New research regarding a worrisome coronavirus variant that exploded in Brazil seems to further suggest what scientists have feared: The variant, known as P.1, appears to spread more easily and appears more capable of reinfecting those who have already recovered from previous bouts of COVID-19.

The findings, which have not yet been peer-reviewed, showed that the P.1 variant drove the second wave of COVID-19 infections in Manaus, Brazil — the same Amazon region already devastated by a first wave in the spring of 2020.

The researchers estimated that P.1 is somewhere between 1.4 and 2.2 times more transmissible than other lineages of the novel coronavirus.

The same research found that the Brazilian variant, now identified in more than 20 countries, also appears to be better at escaping natural immunity. The team estimated that P.1 evaded between 25% and 61% of immunity gained from prior infection with previously circulating strains.

In other words, out of 100 people infected with non-P.1 virus strains that circulated in Manaus last year, between 25 to 61 of them could have been re-infected if exposed to P.1 in Manaus, the researchers said. 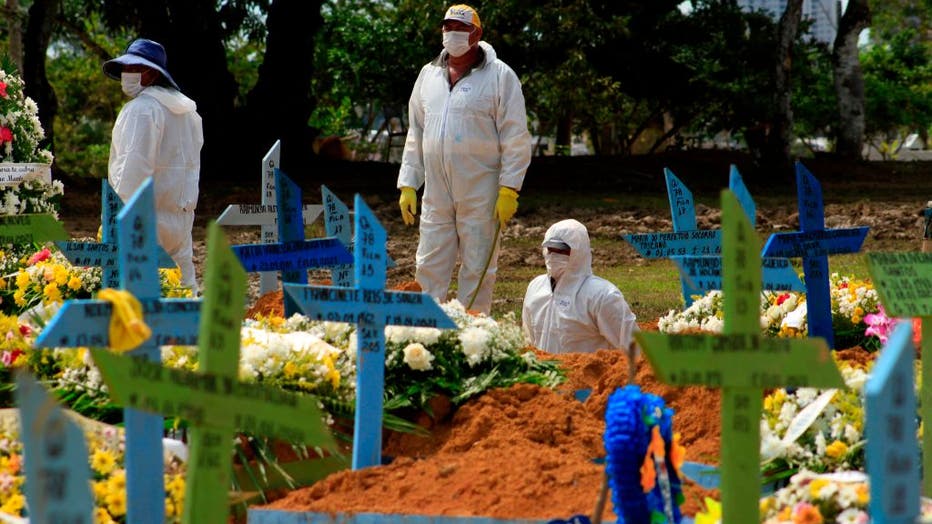 Gravediggers are seen during a funeral of a COVID-19 victim at the Nossa Senhora Aparecida cemetery in Manaus, Amazonas state, Brazil, on Jan. 22, 2021. (Photo by MARCIO JAMES/AFP via Getty Images)

P.1 also carries a concerning set of mutations, including three in the spike protein (K417T, E484K and N501Y). Research has suggested that some of these mutations, such as N501Y, might help the virus bind more tightly to human cells. Other mutations, such as E484K, may enable the variants to evade antibodies from previous infections.

Many of these key mutations are shared by two other concerning coronavirus variants drawing global attention: B.1.1.7, the U.K. variant, and B.1.351, the South African variant.

All three of the variants have been detected in the U.S. P.1, specifically, has been reported in five states to date: Alaska, Florida, Maryland, Minnesota and Oklahoma.

The findings, from researchers at the University of São Paulo, Imperial College London and the University of Oxford, suggested that the P.1 variant likely emerged in Manaus in early November 2020. It was first detected in samples from the city in December.

The team originally published those findings on Jan. 12, reporting that the strain had been detected in 42% of the samples collected between Dec. 15 to 23. They also noted cases among four travelers who were tested at an airport in Japan and had traveled to Brazil.

In the team’s most recent findings, P.1 had rapidly surpassed other lineages in samples — increasing from 0% to 87% in about seven weeks' time.

Vaccine expert on differences between Johnson & Johnson and Pfizer, Moderna

Dr. Williams Moss, an epidemiologist and executive director of the International Vaccine Access Center at Johns Hopkins, shares the science behind adenovirus vs. mRNA vaccines.

The study only considered acquired immunity from natural infection and did not study vaccine effectiveness against P.1.

"There’s no concluding evidence really to suggest at this point that the current vaccines won’t work against P.1," said study author Nuno Faria, a virus expert at Imperial College London, during a media briefing. "I think (the vaccines) will at least protect us against disease, and possibly also against infection."

Faria’s team concluded in their findings that enhanced genomic surveillance of these variants around the world is critical to stemming the pandemic.