WASHINGTON - President Joe Biden on Friday named Jessica Stern to serve as the State Department’s U.S. special diplomatic envoy for LGBTQ rights amid a series of activities held to celebrate Pride Month at the White House.

Stern will work to ensure that U.S. diplomacy and foreign assistance promote and protect LGBTQ rights around the world, according to a White House statement. She will also bring together "like-minded governments, civil society organizations, corporations and international organizations to uphold dignity and equality for all," the statement said.

Stern currently serves as the executive director at OutRight Action International, an organization that defends human rights and works to prevent abuses of LGBTQ people. She is also an adjunct associate professor of international and public affairs at Columbia University.

Biden spoke at the White House later about Pride Month and what it represents.

"It stands for courage. The courage of all those in previous generations and today who proudly live their truth. Stands for justice. Both the steps we’ve taken and the steps we need to take. And above all, Pride Month stands for love," Biden said.

"Us even being here proves how much change is possible in America," Buttigieg said. "So many lives have been changed, saved by the sustained advocacy, the moral resolve, the political courage of countless LGBTQ-plus leaders and allies, some elected, some invisible, some long gone, some in this room right now." 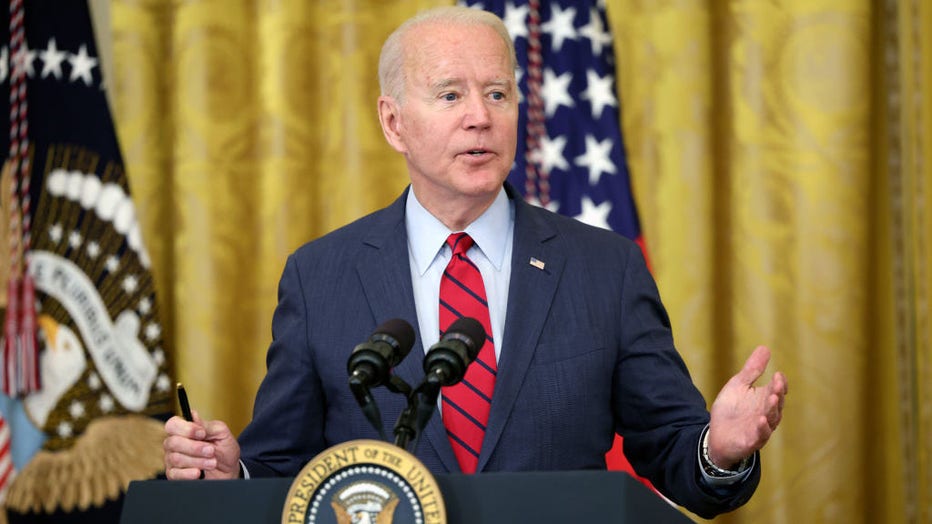 A White House hallway was lit in the colors of the rainbow flag, a symbol of the LGBTQ movement, and Biden said he takes the hallway each day as he goes between the residence and the Oval Office. Also on display was a candle carried during the AIDS vigil and a pair of sandals owned by Matthew Shepard, a gay college student who was fatally beaten in 1998 and whose death inspired new hate crime laws.

The White House’s celebration of Pride Month and focus on those in the LGBTQ community carries personal resonance for many in the Biden administration.

Karine Jean-Pierre, the White House's principal deputy press secretary, shared her own story on Friday about coming out to her mother at the age of 16.

"I came out to my Mom when I was 16 years old. The revolted look on her face sent me running back into the proverbial closet and slamming the door shut. After that, my sexuality became a family secret and it would stay that way for years," Pierre wrote in part on Twitter.

Pierre said she previously dated but hid those relationships from her family. She added that her family eventually evolved to "embrace the LGBTQ community," as well as her membership in it.

"I’m proud to be an out Black Queer woman and I have been for quite some time," Pierre tweeted. "My journey towards feeling accepted by myself and loved ones wasn’t an easy one, but it was worthwhile. No matter where you are in your journey, I see you, we see you and we celebrate you."

Pulse nightclub survivor Brandon Wolf speaks five years after the massacre that claimed the lives of 49 people and injured dozens of others. While speaking with NewsNOW from FOX's Pilar Arias he recounts what happened that night, his life since the tragedy and how he will commemorate.

Earlier Friday, Biden signed into law a measure that designates the Pulse Nightclub in Orlando, Florida, as a national memorial. A mass shooting at the club in June 2016 left 49 people dead and 53 wounded in what was the deadliest attack on the LGBTQ community in U.S. history.

The president said in a statement earlier this month that he has "stayed in touch with families of the victims and with the survivors who have turned their pain into purpose" and described the club as "hallowed ground."