ROME - After a meeting with Pope Francis on Friday at the Vatican, President Joe Biden is joining other leaders for the G-20 summit this weekend in Rome.

Leaders of the Group of 20 countries will gather on Saturday and Sunday for their first in-person summit since the pandemic took hold. They’re confronting a global recovery hindered by an energy crunch that has spurred higher fuel and utility prices. They’re also facing new COVID-19 outbreaks and logjams in supply chains.

The presidents and prime ministers represent 80% of the global economy. The summit will allow the leaders to talk and apply peer pressure on many of these current issues.

The top priority for the economic recovery is speeding up the vaccination of the world population, according to the International Monetary Fund.

The G-20 countries have supported vaccine-sharing through the U.N.-backed COVAX program, which has failed to alleviate dire shortages in poor countries. Donated doses are coming in at a fraction of what is needed, and developed countries are focused on booster shots for their own populations.

Negotiations before the summit have not focused on a large number of vaccines that could be made available, though countries talked about strengthening health systems.

President Joe Biden met with Pope Francis at the Vatican on Oct. 29, 2021, after announcing a framework for his sweeping domestic policy package at home. FOX News' Doug Luzader shares what to know.

The summit will also offer an opportunity for a dialogue on high oil and gas prices because it includes delegations from major energy producers Saudi Arabia and Russia, major consumers in Europe and China, and the U.S. — which is both.

"Perhaps the most important thing the G20 could do is to tell those among them that are major energy suppliers that they should think about their future," said Holger Schmieding, chief economist at Berenberg Bank.

If energy prices are too high in the developed world, it will only speed up the move away from fossil fuels, "which is ultimately, in the long run, bad for the suppliers," Schmieding said.

The White House said Biden intends to engage with other key leaders about energy prices, with oil recently hitting a seven-year high in the U.S. at over $84 per barrel and the international Brent crude benchmark reaching a three-year peak at over $86.

"We are definitely in an energy crisis, there is no other way to put it," said Claudio Galimberti, senior vice president of analysis at Rystad Energy and an expert in oil market demand.

Biden is also expected to press for countries to share more information about troubles with supply chains that have slowed growth in the developed world.

Port and factory closures, shortages of shipping containers and rising demand have contributed to backlogs at ports and delays for deliveries of everything from bicycles to computer chips used in smartphones and cars.

U.S. National Security Advisor Jake Sullivan said the president would push for more transparency about identifying logjams with other governments. 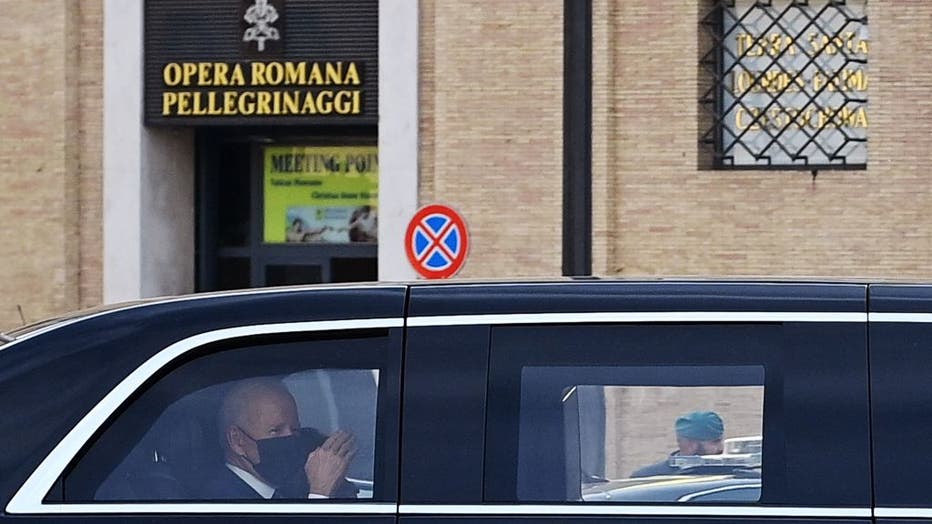 US President Joe Biden (L) waves as his motorcade drives across the Via della Conciliazione in Rome leading to the Vatican on October 29, 2021, for Biden's meeting with Pope Francis, ahead of an upcoming G20 summit of world leaders to discuss climate

Trade expert Chad P. Bown, senior fellow at the Peterson Institute for International Economics, agreed that sharing information can be helpful but said "there’s very little anyone can do" now about the backups over a lack of shipping containers.

Over the long term, leaders can discuss efforts to diversify the supply of key goods such as masks, other medical protective equipment and semiconductors.

"There is a call to diversify some production of semiconductors geographically" away from Asia, Bown said.

Meanwhile, the summit will likely celebrate an agreement on a global minimum corporate tax, aimed at preventing multinational companies from stashing profits in countries where they pay little or no taxes.

All G-20 governments signed on to the deal negotiated among more than 130 countries, and it now faces an ambitious timeline to get approved and enacted through 2023. Biden has tied his domestic agenda to it — creating a global minimum tax can allow the U.S. to charge higher taxes without the risk of companies shifting their profits to tax havens.

U.S. adoption is key because so many multinational companies are headquartered there.

The agreement also helps remove trade tensions between the U.S. and Europe, and it allows nations including France, Italy and Spain to back off digital services taxes that targeted U.S. tech companies Google, Facebook and Amazon.

Biden is attending the G-20 with his tax and economic agenda still subject to congressional negotiations, meaning he will be unable to show that the U.S. is leading on global corporate taxes. But his national security adviser said G-20 leaders understand the nature of congressional talks.

"They’ll say, ‘Is President Biden on track to deliver on what he said he’s going to deliver?' And we believe one way or the other, he will be on track to do that," Sullivan said.

The G-20 summit in Rome comes just before many of the leaders will participate in the U.N. climate change conference beginning Sunday in Glasgow, Scotland.