Tensions and dialogue in Brooklyn

Tensions are high between government officials and some Orthodox Jewish groups in Brooklyn over COVID restrictions. But dozens of rabbis say those groups don't represent most Jews.

NEW YORK (AP) - After months of grappling with a pandemic that has walloped New York's Orthodox Jewish communities, prompting changes to holidays, mourning and prayers, new limits on worship and other activity in some areas are pushing tensions in some neighborhoods of Brooklyn to the boiling point.

New restrictions in places where coronavirus cases are rising, including several Orthodox areas, led to street protests Tuesday night. Videos posted on social media showed hundreds of Orthodox men gathered in the streets of Brooklyn's Borough Park neighborhood, in some cases setting bonfires by burning masks, and a crowd attacking a man who filmed the unrest. On Wednesday night, crowds of men returned to the streets as police watched.

As the protests made headlines, and the Orthodox group Agudath Israel led a Thursday federal court challenge seeking to halt the constraints, some Orthodox Jews in New York urged officials and fellow believers to find a way to communicate better.

"We need partnership. We need government and the community to work together" on an approach to fighting the virus that can "respect the culture" of the faith, said Rabbi Abe Friedman, an Orthodox leader and law enforcement chaplain in Brooklyn.

Friedman said he hoped the government would understand that Orthodox Jews are not "gathering careless of the pandemic," but rather returning to cherished customs of communal prayer, celebration and mourning.

"We congregate together, we pray together, and this is why social distancing is even more hard at times, and it has a greater effect," said Friedman, lauding community members who are heeding public health guidance. 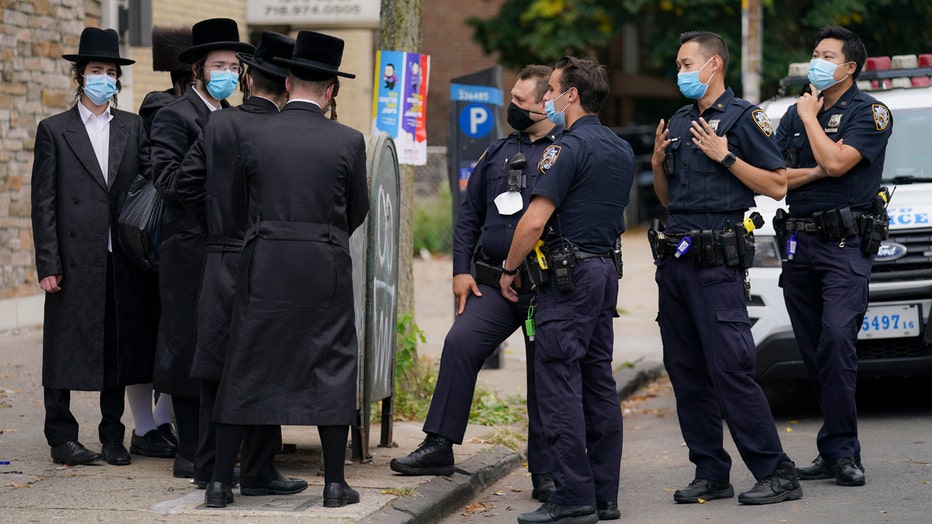 Orthodox Jews in the U.S. have no single faith-based governing structure, but leaders at six major groups representing different sectors signed onto a unified statement in March urging their faithful to heed social distancing rules.

In the view of many Orthodox Jews in New York whose areas were hit hard and early by the pandemic, city and state officials stoked tension with their handling of restrictions on houses of worship and schools in hot spots. On top of feeling singled out as a religious community, some Orthodox Jews can lack sufficient, reliable public health guidance, given often infrequent access to TV and the internet — all while confronting curbs on faith practices built on social engagement that have sustained them for generations.

The spike in virus cases and resulting restrictions came soon after Jews celebrated some of the holiest days on their calendar. After this week's Sukkot holiday, the weekend's Simchat Torah promises to further test Orthodox communities' ability to gather safely. The Agudath Israel-led lawsuit says the state's new limits "make it impossible for Orthodox Jews to comply with both their religious obligations and the order" imposing restrictions.

Simchat Torah is normally a joyful occasion when worshippers often dance with Torah scrolls, holding and kissing them — risky behaviors during a pandemic. Orthodox practices also involve multiple daily group prayers, something many were forced to change this spring as the virus began spreading.

Another essential aspect of Judaism, however, has proven helpful in promoting masks and social distancing: the Torah's emphasis on the value of human life, to the degree that violating other tenets is permissible if it means saving lives. In announcing a partnership with Agudath Israel to distribute 400,000 masks, the Boro Park Jewish Community Council in Brooklyn reminded members that "we have an obligation from the Torah to stay safe."

"Only by working with communities — treating them as partners, not problems — will the city have a chance at achieving the desired outcomes," Yair Rosenberg, a senior writer at Tablet Magazine, wrote in a Thursday column on how to prevent a "looming coronavirus crisis in Hasidic Brooklyn." Rosenberg's father is a rabbi at a modern Orthodox synagogue in one of the city areas subject to the new restrictions.

"This is only about the data and the science, and we're applying it evenly to all communities with respect, with understanding," de Blasio told reporters.

"We've been sued virtually every day for every action taken," Cuomo senior adviser Rich Azzopardi said in a statement. "We're concentrating on reducing the virus in these hot spots and saving lives, period."

Orthodox Jews comprised 10% of the total U.S. Jewish population in a 2013 Pew Research Center study. In Israel, a similar friction is ongoing over public health behaviors among the ultra-Orthodox, who make up about 10% of that nation's population but have accounted for more than one-third of coronavirus cases.

As the debate intensified in New York's Orthodox neighborhoods, more than 400 rabbis and other leaders from multiple branches of Judaism released a letter supporting the city and state's "data-driven, geographically-based efforts to contain the spread of COVID-19."

The letter, released by the New York Jewish Agenda, calls for dissemination of public health guidance in a way that's "both culturally appropriate ... and does not promote antisemitism."

"But to be clear," it said, "requiring masking and social distancing for all gatherings, including religious gatherings, is not antisemitism."

Orthodox Jews were not alone in contesting the state's new limits on in-person worship in certain areas. A lawsuit filed Thursday by Brooklyn's Roman Catholic diocese alleges that the restrictions would force more than two dozen churches to close, "even though those churches have been reopened for months in strict adherence to all medical and governmental guidance, without any COVID-related incidents whatsoever."