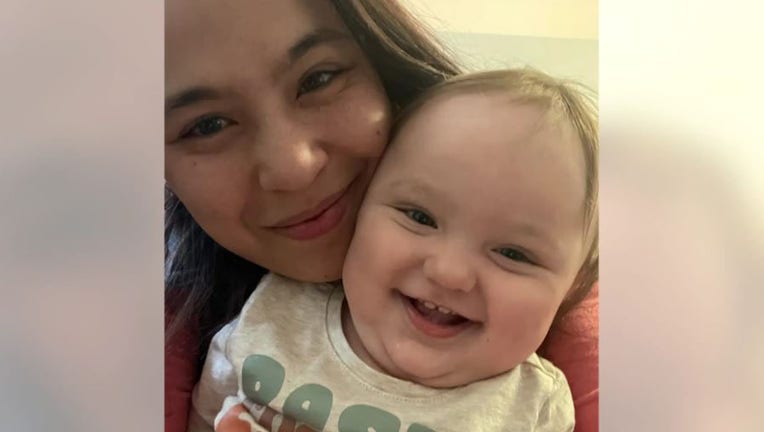 Allie Seckel is a certified infant feeding technician and a formula feeding consultant who spoke to Fox News Digital about the baby formula shortage. She's pictured here with her 10-month-old daughter. (Allie Seckel)

As parents across the nation struggle with the ongoing baby formula shortage, a certified infant feeding technician in Alaska is lending a hand through a social media group as the dilemma grows more concerning and many shelves remain bare.

Allie Seckel, the mother of a 10-month-old in Kodiak, Alaska, launched the Formula Exchange Group on Facebook in January when the baby formula shortage was just beginning.

"It was something I had noticed," Seckel told Fox News Digital. "Certain formulas here and there were starting to be a little bit harder to find. But I definitely did not anticipate it to be the extent it’s at now."

Parents affected by shortage are ‘in tears’ at the store

MARYLAND MOM OF 4 KIDS, INCLUDING 10-MONTH-OLD TWINS, IS DESPERATE FOR BABY FORMULA

The recalls followed the deaths of two infants who reportedly consumed formula made at the company’s plant in Sturgis, Michigan. 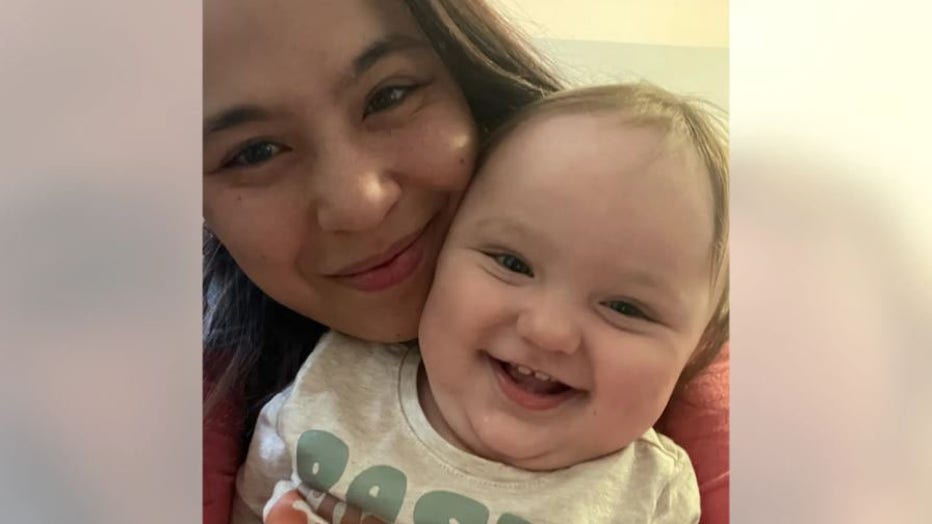 Allie Seckel is a certified infant feeding technician and a formula feeding consultant who spoke to Fox News Digital about the baby formula shortage. She's pictured here with her 10-month-old daughter. (Allie Seckel)

In a recent statement to FOX Business, Abbott Laboratories said, "A thorough review of all available data indicates that the infant formula produced at our Sturgis facility is not likely the source of infection in the reported cases and that there was not an outbreak caused by products from the facility."

Major retailers such as Target, Walmart, Walgreens and CVS have limited purchases of formula in some cases, yet many parents are panic-buying. 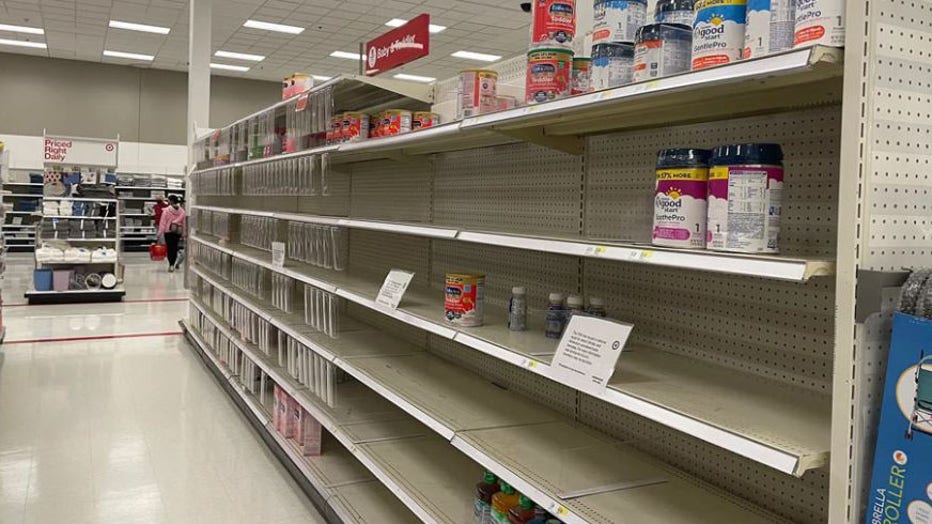 Major retailers such as Target, Walmart, Walgreens and CVS have limited the purchases of formula in some cases, yet many parents are panic-buying. In this May 2022 photo, a Target in Long Island, N.Y., shows empty formula shelves. (Nicole Pelletiere/

"To think that there are people that will take advantage of the situation is pretty mind-blowing, but [scamming is] absolutely happening."

For many parents, the situation is "devastating," Seckel said, particularly for parents of infants who need specialty or hypoallergenic formulas.

"They’re breaking down," Seckel said. "They’re in tears in the grocery aisle."

Although she feeds formula to her 10-month-old daughter, Seckel said the shortage hasn’t been a problem for her family because of where they live. 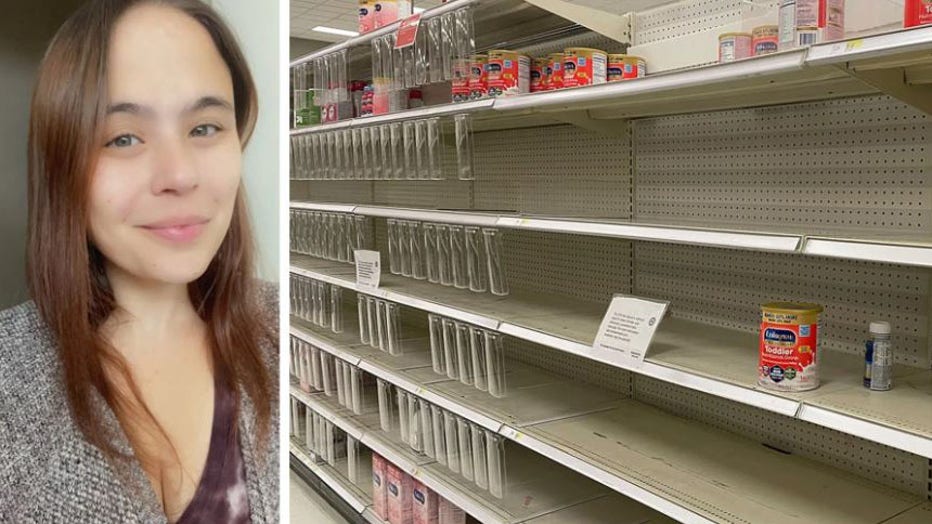 "Areas [in Alaska] that are remote seem to actually be less affected," Seckel said.

"So we’ve been fortunate that we’re not too badly affected here [in Kodiak]."

Seckel said she's heard that other major cities in her state like Anchorage and Juneau have been experiencing the shortage just like the rest of the U.S.

Seckel, a formula feeding consultant, runs a Facebook page called The Formula Fairy, which offers information, resources and support for parents who feed formula to their infants.

Seckel launched the page last August because "there’s a pretty serious lack of information and resources for formula parents." 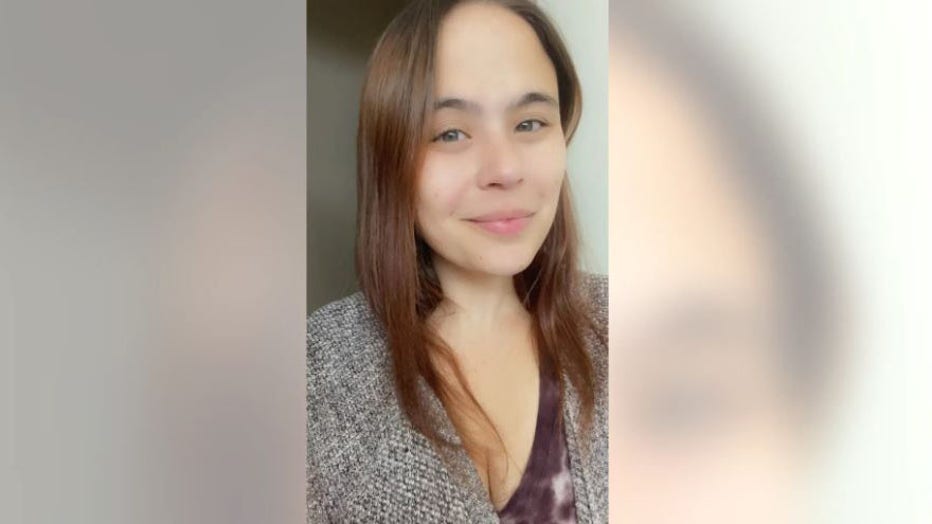 Allie Seckel runs the Formula Exchange Group on Facebook, where parents can buy and sell formula during the shortage. (Allie Seckel)

Since the shortage, Seckel's job has gotten busy.

Right now she's offering free resources to parents who are looking for alternatives to their baby's current formula.

BABY FORMULA SHORTAGE SENDS TENNESSEE MOM OF 8-MONTH-OLD INTO A ‘PANIC’: ‘I BROKE DOWN’

When she launched the Formula Exchange Group, Seckel made separate posts for every kind of formula.

In the comments section of each post, parents can say if they need formula for their infants, or if they have extra formula that they’re willing to sell to other parents.

"I wanted to come up with some sort of system that made it a little easier to manage, rather than posts all over the place."

"There are a lot of different formula buy-sell groups on Facebook … but a lot of them seem kind of unorganized and chaotic," Seckel said.

"I wanted to come up with some sort of system that made it a little easier to manage, rather than posts all over the place."

The public Facebook group, which didn’t get much attention early on, has grown to 4,500 members.

"I've had quite a few folks reach out saying that they were able to get formula, some that are actually really hard to find right now," Seckel said.

While parents may be scrambling for formula to feed their children, experts and government agencies such as the USDA and CDC still caution against accepting donations from unknown sources. 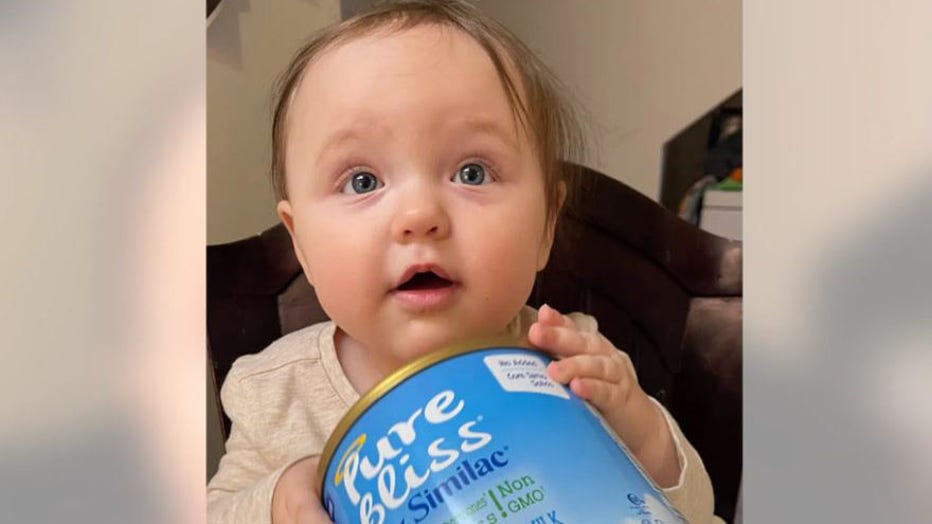 Although Seckel feeds formula to her 10-month-old daughter, the Alaska mom said the shortage hasn’t been a problem for her family so far because of their location. (Allie Seckel)

The reason is improperly stored formulas could potentially cause more harm than good.

"Unused, returned infant formula may have been inappropriately stored (e.g., exposed to extremely high temperatures), may be past its use-by-date, or subjected to tampering (e.g., labels or use-by dates changed)," the USDA’s Food and Nutrition Service wrote in a WIC Policy Memorandum.

Improperly stored formulas could potentially cause more harm than good.

"Some of these conditions can cause products to lose nutrients, impact the product’s safety and potentially threaten the health of recipients."

Seckel acknowledged that formulas should only be bought from trustworthy, reputable manufacturers from within America. 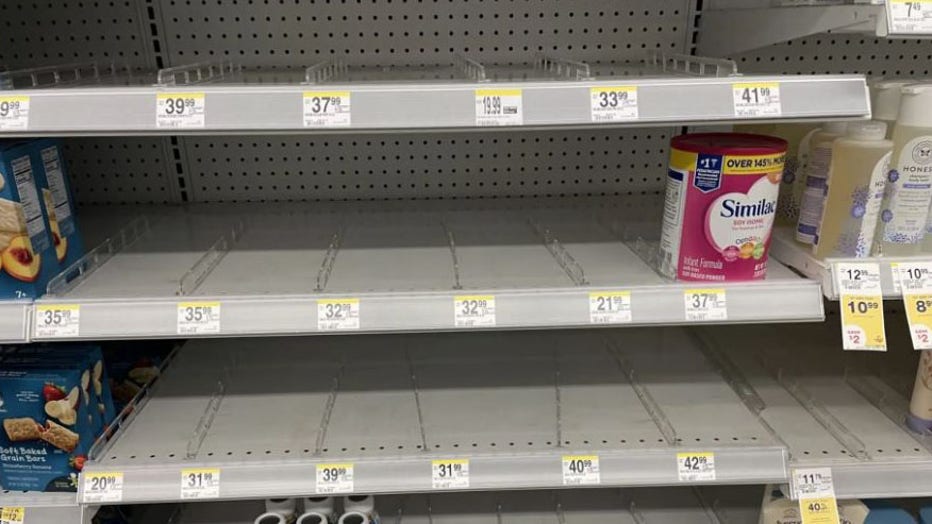 A mostly empty baby formula section is pictured here at a Walgreen's in Westchester County, N.Y., during the second week of May 2022. (Fox News Digital)

"Typically it’s not recommended to import formula from other countries or buy from Facebook groups, third party sellers etc. since there is no guarantee that the formula is safe, was stored properly and isn’t contaminated," she said.

"But in these desperate times when parents are unable to find formula anywhere locally to them, it comes down to choosing a less ideal alternative or not feeding their babies — and feeding babies has to come first," Seckel said, while suggesting parents coordinate with friends or family to ship formula to them.

Seckel offered tips to stay safe if parents believe that buying formula through Facebook groups is their only option amid the ongoing shortage.

If sending baby formula to someone by mail …

1. Make sure the formula is not expired and has not been recalled.

2. Package the formula very carefully so that the cans don’t become dented. A nearly empty baby formula display shelf is seen at a Walgreens pharmacy on May 9, 2022 in New York City. (Photo by Liao Pan/China News Service via Getty Images)

If receiving baby formula from someone …

1. Bring the package inside your home ASAP (again, so it’s not exposed to extreme temperatures).

2. Make sure the formula is sealed — and that it's not expired, not recalled and not dented.

3. Make sure the formula looks, smells and feels "normally." If anything seems off at all, don’t use it.

4. Try to receive formula only from someone you know personally and trust.

"When there’s no alternative, I think it’s important to educate parents on ways to reduce risk and help keep their babies safe when ordering online," Seckel noted. 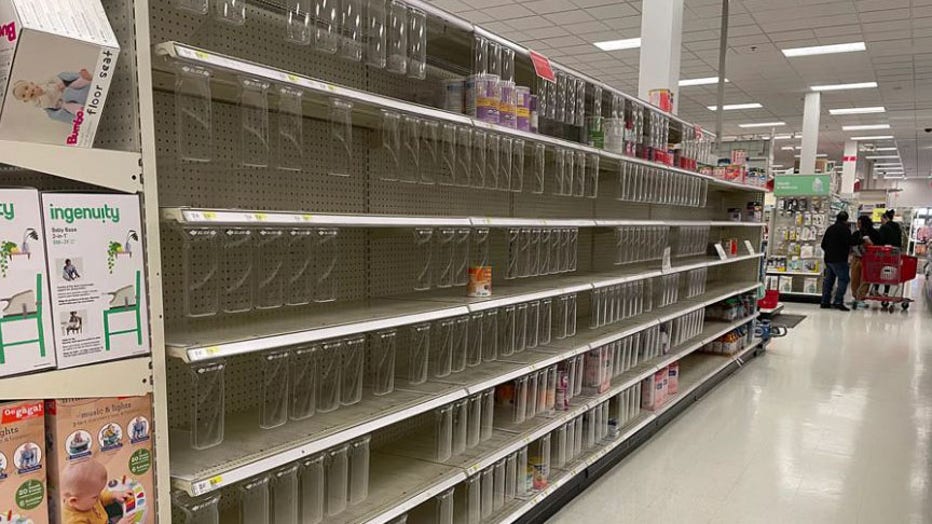 More parents are speaking out as the baby formula shortage crisis affects Americans in 2022. A Target in Long Island, N.Y., shows starkly empty formula shelves in the baby and toddler aisle of the store. (Nicole Pelletiere/Fox News Digital)

These scammers promise to send formula to paying parents — only to leave them empty-handed, Seckel said.

"It’s horrible to see," Seckel said. "We’re talking about feeding infants and they're desperate [and] doing anything they can."

"To think that there are people that will take advantage of the situation is pretty mind-blowing, but it's absolutely happening," she added.

Seckel said parents have been using PayPal’s Goods and Services feature — or similar features on other platforms — which offers fraud protection for buyers.

Seckel said if a seller is unwilling to use the Goods and Services feature, parents should be cautious.

She also suggested checking out any profiles of potential sellers to make sure they seem legit; in addition, she said checking other formula exchange groups and pages to see if the seller has been reported for scamming somewhere else makes sense.

Call the pediatrician for samples and alternatives

When it comes to actually finding formula, Seckel said parents should call their pediatrician and ask for formula samples and alternatives, especially parents of infants who need hypoallergenic formulas. 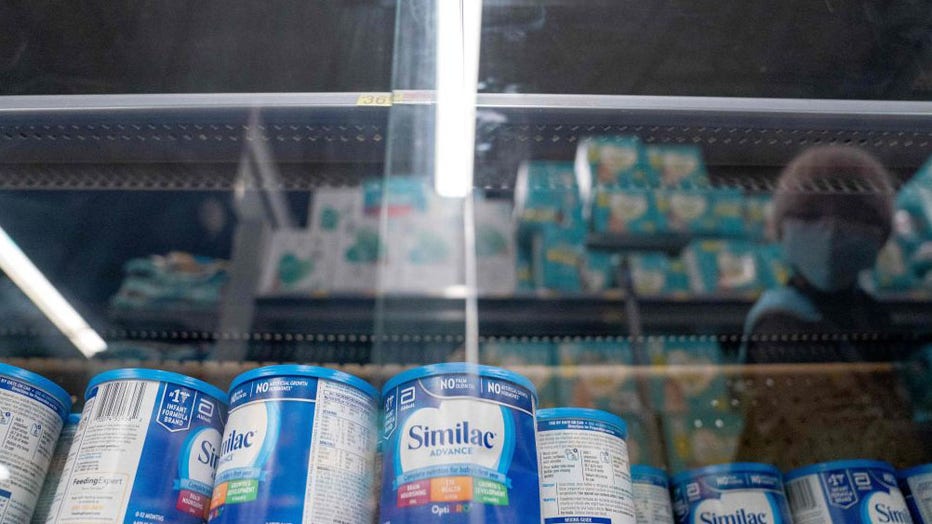 A shopper is reflected in a glass case while looking at baby formula at a grocery store in Washington, DC, on May 11, 2022. (STEFANI REYNOLDS/AFP via Getty Images)

"There are quite a few [alternatives] for like babies that require hypoallergenic formulas, but they're usually options that you're going to need pediatrician approval [to use]," Seckel said.

"Whatever you do, don’t make homemade formula."

"Talking to store managers is another huge one," Seckel said. "They can be really helpful [in] letting people know when to expect things or if it’s going to be a long time before they can expect it again."

If it’s available and your baby is able to tolerate the change, Seckel also suggested switching infants to a more accessible formula, either between brands or from a name brand to a generic brand.

There are also formula subscription services such as ByHeart and Bobbie, though Seckel said they tend to be more expensive and some aren’t accepting new subscribers at the moment.

The one thing parents should not do is make their own formula, Seckel said, echoing the advice of pediatricians.

"It’s really dangerous," Seckel said. "[Babies] require a very specific set of nutrients that are impossible to replicate at home."

"That’s really the most important thing," Seckel added. "Whatever you do, don’t make homemade formula."