There was a string of violent assaults over the weekend just as full subway service resumed Monday.

NEW YORK - New York City is marking another major milestone in its recovery from the coronavirus pandemic as 24-hour subway service returns.

Subway ridership had plummeted 90% after the start of the coronavirus pandemic. The MTA suspended around-the-clock subway service on April 30, 2020, in order to facilitate deep cleaning of the trains and the clearing of homeless people from the trains and stations. The overnight closure ran from 1 a.m. to 5 a.m. until February of this year when it was shortened to two hours, from 2 a.m. to 4 a.m.

But straphangers are slowly returning to the service, with ridership on the city's subways and buses passing three million earlier this month. Combined ridership on Metro-North and the Long Island Rail Road is now at 160,000, well above the combined average of 23,000 from a year ago, with weekend ridership now approaching 50% of pre-pandemic levels.

In order to entice people to use the subway again and return ridership numbers to pre-pandemic levels, the MTA unveiled its new #TakeTheTrain, #TakeTheBus campaign on Sunday. Riders will see digital signs at subway entrances, ads on buses, and billboards on roadways promoting a return to the MTA system. 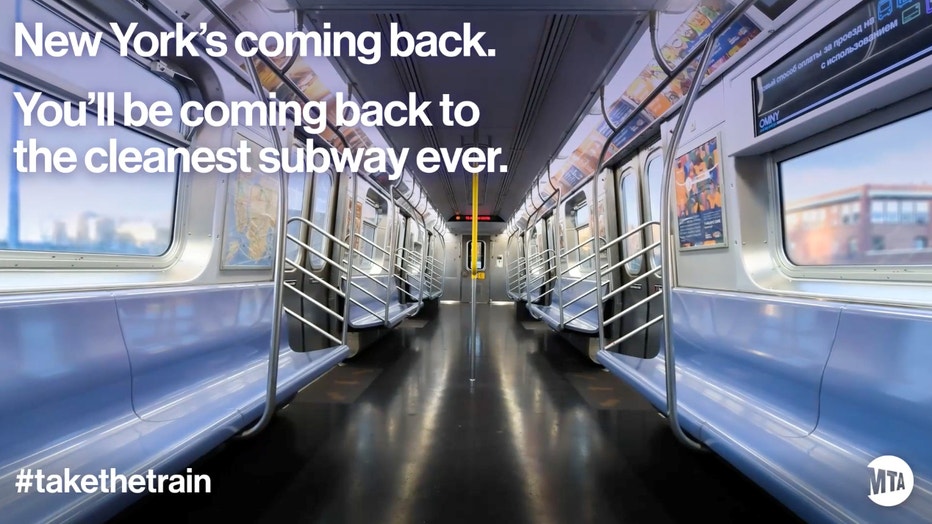 "It's time to #TakeTheBus and #TakeTheTrain again," said New York City Transit Chief Customer Officer Sarah Meyer. "A year ago, we were actively encouraging anyone who wasn't an essential worker not to ride the system. Thankfully those days are now long gone, and we are thrilled to welcome New Yorkers back to their commuter rails, subways and buses that are cleaner and faster than ever before."

However, crime on the subway remains a significant concern for many commuters as NYPD reported three new assaults on Sunday alone.

At around 5:30 a.m., police say three men assaulted and robbed a 41-year-old rider in a 6 train at Bleecker Street. Then, at 8:30 a.m., a 41-year-old man riding a Brooklyn-bound F train was robbed of his cellphone and cash at gunpoint. Finally, just after 9:30 a.m., a 56-year-old woman identified as Tammy Lang was arrested and charged with assault for allegedly punching a 70-year-old woman in the face while waiting for a train at Union Square Station.

The return of 24-hour subway service is supposed to kick off a important week of reopening in New York City, but another round of violence has many commuters concerned about their safety.

Meanwhile, on May 19, New York, New Jersey and Connecticut are expected to lift nearly all remaining capacity restrictions on businesses in a coordinated effort between the states.

Police arrested several suspects in connection with a series of attacks on the subway that unfolded early Friday.