NEW YORK - New York declared a State of Emergency for 11 counties as a winter storm is forecast to impact portions of upstate New York with intense lake-effect snow through Sunday.

The National Weather Service received reports early Friday of more than a foot of snow along the eastern end of Lake Erie, with totals as high as 19.5 inches in Buffalo and up to 22.5 inches in Hamburg, about 12 miles from Buffalo.

Hazardous travel conditions and local power outages as a result of the storm are likely due to the combination of snow and wind in the forecast. Lightning and thunder may also occur in the heavier, more intense bands.

A potentially historic snowstorm has slammed Western New York with up to four feet of snow in some areas, closing roads, canceling flights and forcing many residents to start the hard work of digging out.

The NFL is relocating the Buffalo Bills' Sunday home game against the Cleveland Browns to Detroit, where the Bills were already scheduled to play the Lions on Thanksgiving.

"We all have to do our part to make sure that everyone stays safe during this winter storm — that's why I have declared a State of Emergency for impacted counties, which will free up resources and boost our readiness," Governor Hochul said. "My administration has been preparing around the clock for this potentially life-threatening weather event, bringing in additional safety personnel and equipment, closing down the New York State Thruway, and activating Emergency Operation Centers. I urge all New Yorkers to stay prepared and vigilant over the next few days, making sure to look after vulnerable loved ones and neighbors."

Lake Effect Snow Warning and Winter Storm Watches are in effect through Sunday evening for several counties in the Western New York, Finger Lakes, Central New York and North Country regions. As of Thursday, the National Weather Service forecast anticipates several feet of snow for multiple locations over the duration of this storm.

The State Office of Emergency Management's Emergency Operations Center is activating Thursday and the said the state's stockpiles are prepared to deploy assets to localities to support any storm-related needs.

To support lake effect snow response in critical areas, a total of 112 staff from other regions, including 92 plow truck operators/supervisors, 11 equipment operator instructors, six mechanics, one operations manager, 1 ICS support staff, one safety representative, and one ICS support staff member were deployed to impacted regions. Additionally, 15 plow trucks, 6 medium duty trucks with plow, and 1 bulldozer were also deployed. They are distributed as follows:

NY is implementing a full commercial vehicle ban at the following locations beginning Thursday at 4 p.m.:

To find the latest traffic and travel conditions, call 511, visit www.511ny.org or download the free 511NY mobile app. The online system and mobile app include a state road map, indicating which roads are experiencing snow conditions and where conditions are normal. 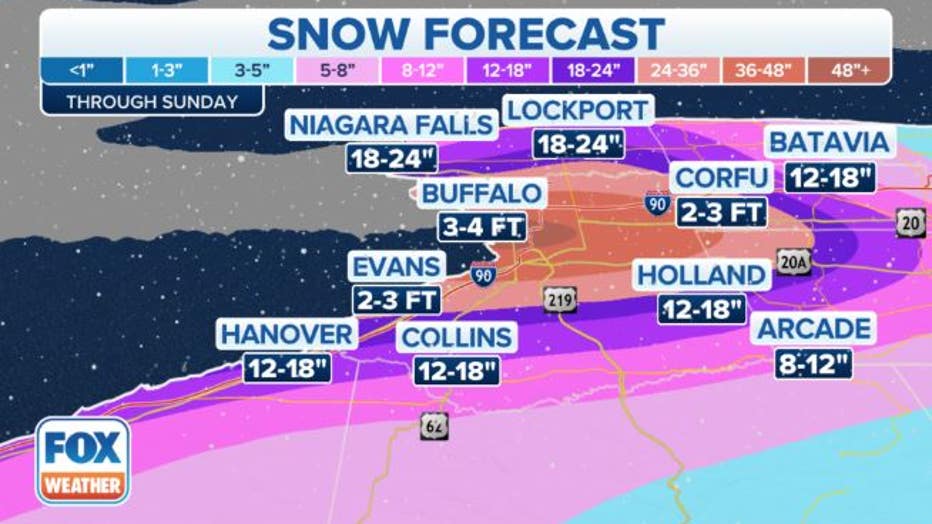 Thruway Authority personnel are staffed around the clock and ready to respond to the lake effect storm with 657 operators and supervisors statewide. Thruway has shifted and deployed additional staff and equipment from its New York, Syracuse, and Albany Divisions to support snow and ice operations in the potentially hardest hit areas in Western New York. Deployed resources include operators and supervisors, mechanics, large plow trucks, and large snowblowers.

Additionally, Thruway Emergency Operations Centers will be staffed in Buffalo and headquarters for the duration of the storm to assist with managing snow and ice operations, traffic incident response, emergency management, and real-time traveler information.

Beginning at 4 p.m. Thursday, all commercial traffic will be banned on the New York State Thruway (I-90) from exit 46 (Rochester I-390) to the Pennsylvania border, and the Niagara Thruway from I-90 to exit 22 (Route 62). ALL commercial traffic heading eastbound on the Thruway must exit at exit 61 (Ripley - Shortman Rd).

Commercial traffic heading westbound on the Thruway towards Pennsylvania from points east, should use exit 46 (Rochester - I-390) for I-390 to I-86 West.