The Midwest is expected to receive several inches of snow Saturday night as a winter storm moves across the region.

According to FOX Weather, snow will fall from the lower Missouri Valley to the Great Lakes on Saturday. The precipitation could be so heavy, some areas may experience hazardous travel conditions across the region.

Sleet and freezing rain are also expected to develop in a narrow band stretching across Kansas and Missouri, which will create very slick conditions on roads.

Salt-spreading trucks canvased the streets of Chicago ahead of Saturday’s storm, FOX 32 Chicago reported. The trucks will continue dumping salt on the streets into the night.

Chicago and its surrounding suburbs are caught between a winter storm coming in from the southwest and a northeasterly wind coming off of Lake Michigan — which could create as much as an inch of lake effect snow every hour. 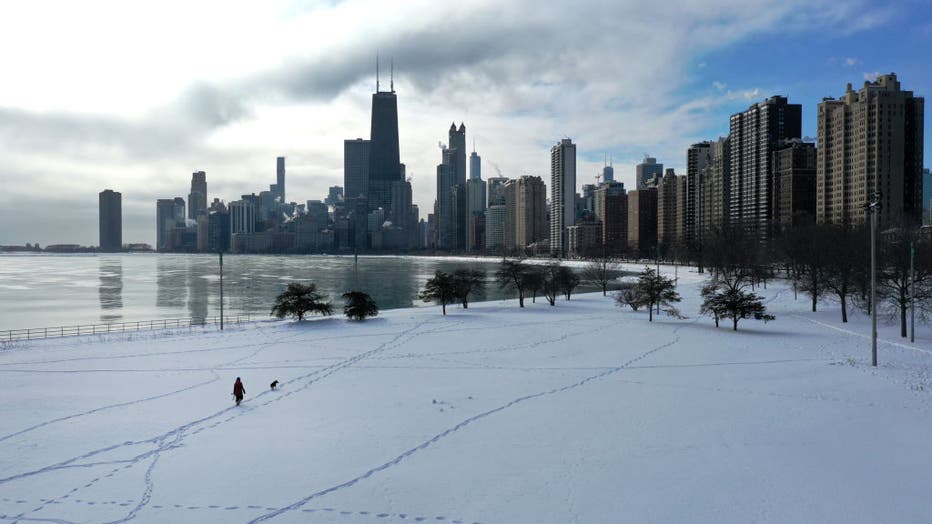 An aerial photo made using a drone shows a resident walking her dog along the snow-covered lakefront at North Avenue Beach as temperatures hung in the low teens on Feb. 9, 2021, in Chicago, Illinois. (Photo by Scott Olson/Getty Images)

Michigan isn’t expected to see snowfall until nighttime. But the state could accumulate as much as seven inches along Interstate 94 in the west and five inches in the southeastern part of the state.

Southeastern Michigan will be under a winter weather advisory from 5 p.m. Saturday until 10 a.m. Sunday, FOX 2 Detroit reported.

The winter storms will gradually move towards the Canadian border and upstate New York overnight. Northern New England is expected to get some of the lingering snowfall as well as some lake-effect snow showers.

Areas as far away as Tennessee and Arkansas could have periods of light snow by the time the storm ends.