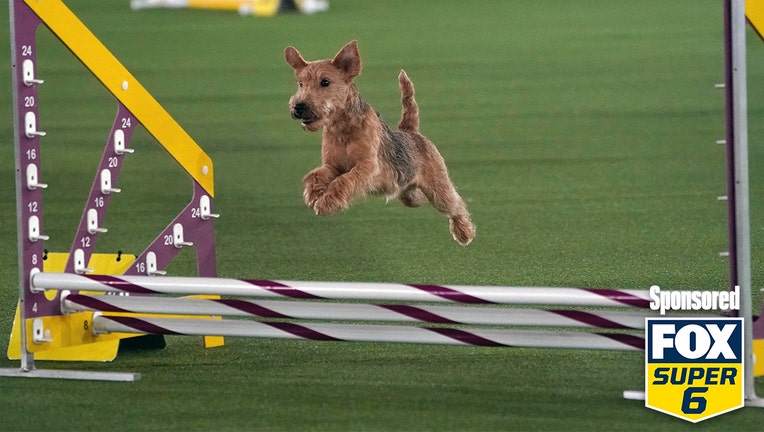 A Lakeland Terrier races during the 8th Annual Masters Agility Championship at the 145th Annual Westminster Kennel Club Dog Show on June 11, 2021 at the Lyndhurst Estate in Tarrytown, New York. (Photo by TIMOTHY A. CLARY/AFP via Getty Images)

Welcome to the Dog Days of June.

Moved away from Madison Square Garden and from its traditional February spot due to the coronavirus pandemic, the 145th annual Westminster Kennel Club Dog Show will take center stage this weekend at historic Lyndhurst Estate in Tarrytown, N.Y.

It is the biggest weekend for the canine set, with 2,500 dogs from all 50 states plus 10 countries heading to New York to renew one of the best slices of Americana in seven different categories. And yes, you can be Best In Show with the FOX Super 6 app.

Just answer six questions about Saturday’s first half of the show (7:30 p.m. ET, FS1), and you could win $1,000. And it’s absolutely free! Just download the FOX Super 6 app on your phone or tablet device.

Here are the questions for Day 1 of the Westminster Dog Show.

Which breed will win the Hound Group?

The options: Basenji, Dachshund, Beagle, Norwegian Elkhound, Saluki or Other

In 2020, the Whippet walked away with the hound group title. However, the Norwegian Elkhound and Dachshund have been multiple winners in this group as well as the Borzoi over the past decade.

Which breed will win the Toy Group?

Which breed will win the Non-Sporting Group?

This one has been up for grabs since 2016 with the Standard Poodle taking home the crown in 2020 and dethroning the Schipperke. A dalmatian hasn’t won this since 2012. It would be an incredible thing if this year when we are thinking so much about first responders that the symbol of every firehouse, the dalmatian, takes it home.

Which breed will win the Herding Group?

In the last five years, only the German Shepherd has won this group twice in 2016 and 2017. Last year, it was the Shetland Sheepdog that won, following up the Bouvier des Flandres in 2019 and the Border Collie in 2018. The Welsh Corgi hasn’t won the group since 2004.

Which breed will win the Masters Agility Championship?

In 2020, P!nk – the border collie – ran just as fast as he can to the middle of nowhere and became the first dog to run the course in under 30 seconds. It was an impressive sight.

There’s a chance that all of them could end up making an impact on Saturday night. One of the things, however, to keep in mind is that guessing how judges react to new breeds is a tricky proposition.

Play the Westminster Dog Show FOX Super 6 contest for free, and you could win $1,000! Just download the FOX Super 6 app and make your picks now for your chance to win!