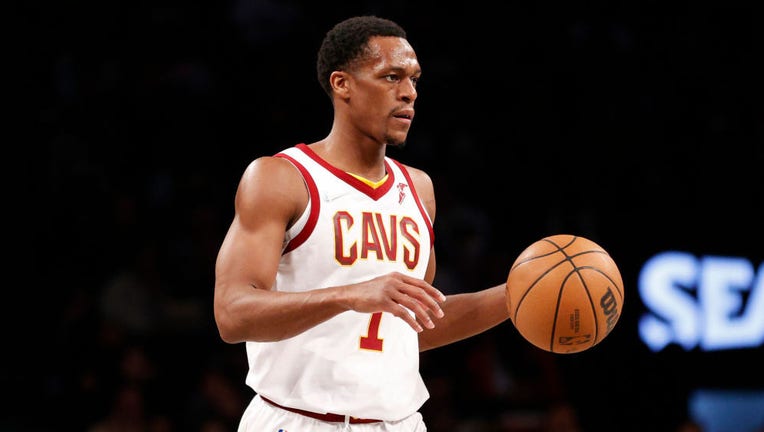 Rajon Rondo #1 of the Cleveland Cavaliers dribbles during the second half of the Eastern Conference 2022 Play-In Tournament against the Brooklyn Nets at Barclays Center on April 12, 2022. (Sarah Stier/Getty Images)

WASHINGTON - Cleveland Cavaliers guard Rajon Rondo is accused of pulling a gun on the mother of his children and threatening to kill her during an argument inside their Louisville home on May 11, TMZ first reported Monday.

Ashley Bachelor, Rondo’s former partner and mother of his two children, filed for an emergency protective order against him on May 13 following the incident. The Cavaliers star has not been named a suspect or arrested, according to TMZ.

The woman alleges Rondo "became enraged" last week and filed for the EPO on Friday in Jefferson County Family Court, news outlets reported. She says in the EPO that Rondo was playing video games with a child when she asked the child to finish separating his laundry so she could wash the family’s clothes, the Associated Press reported.

When the child got up to do so, she said Rondo ripped the video game console out of the wall, went downstairs, smashed a teacup plate, knocked over several water bottles, and began yelling and cursing. According to the EPO, Rondo then went outside and knocked over the trash cans, stomped on the landscaping lights, and drove his car onto the lawn.

When Bachelor confronted Rondo, the EPO continued, he said, "You’re dead." After briefly leaving the house, Rondo returned and beat on a window with a gun. The woman said in the EPO that Rondo was yelling at the kids, asking them why they were scared of him while he had a gun in his hand.

According to the AP, Bachelor called former interim Louisville Metro Police chief Yvette Gentry, who eventually arrived at the house. However, the woman said Rondo wouldn’t allow Gentry inside. The woman said she locked herself in the house with the kids, and Gentry eventually told her Rondo had left and she had his gun.

Two days after the alleged incident occurred, a judge granted Bachelor the protective order. The judge ordered Rondo not to communicate and to stay at least 500 feet away from her, the AP reports.

TMZ reports that Bachelor has been awarded temporary custody of the two children. Rondo was ordered to temporarily turn over his guns to the court. The woman said she’s fearful for the safety of her and her kids and wrote in the protective order that Rondo has a history of "volatile, erratic, and explosive" behavior. Bachelor also claims that Rondo is verbally abusive to their two kids and allegedly hits their son.

In a statement to ESPN, NBA spokesperson Mike Bass said "We are aware of the report and are in the process of gathering more information."

Rondo played 39 games last season between the Cavaliers and Los Angeles Lakers. He has played with eight other NBA clubs, including the Boston Celtics from 2006-14 after being drafted 21st overall in 2006.