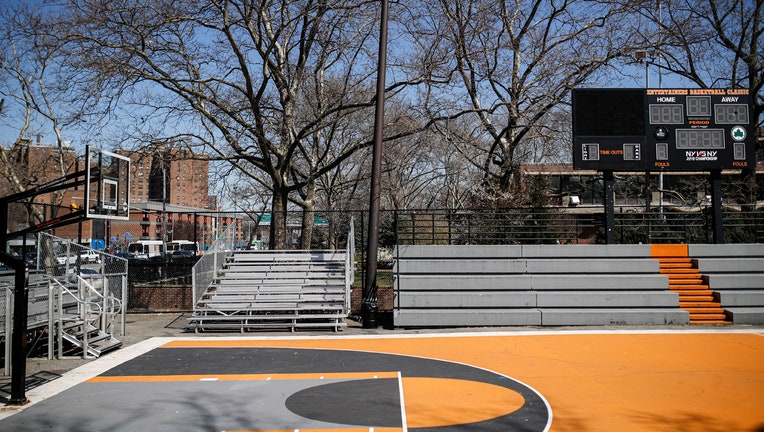 NEW YORK (AP) - The street ball scene remains on hiatus around the country due to the COVID-19 pandemic.

No sounds of bouncing balls. No scuffing of sneakers against dusty concrete. No whipping of basketballs as they fall through nylon nets or metallic ringing of balls careening off rims.

The COVID-19 pandemic has created a stillness that those who best know the New York street ball scene could never have imagined.

"Normally before people go to work in the morning they are factoring in what game they are going to see that evening when they get home," said Rafer Alston, who played for six NBA teams and owes most of his basketball stardom to street ball. "It's the 'it' thing to do in the summertime in New York City."

The silence is being heard and felt around the country, playing out in similar scenes on other legendary outdoor courts from coast to coast.

But Rucker Park is special.

It was there that a young Alston earned the nickname "Skip To My Lou" from one of the court's emcees because of the way he skipped his way up the court before shaking off defenders with his pinpoint dribbling.

Their cameos have been both planned and impromptu, such as when Durant played there during the 2011 NBA lockout and scored 66 points in a game.

Alston would go on to drop his sneakers on the national landscape by starring in the first And1 Mixtape Tour in the late 1990s. That tour brought a culture that had largely been underground in cities like New York, Philadelphia, Oakland and Venice Beach to a national audience.

He can't fathom what a summer without street ball would do to the city.

"It will be tough for them to digest," Alston, now 43, said in a phone interview from his home in Houston. "Summer basketball in the park, whether a tournament or playing pickup — it's a way of life for us."

Damian Pitts hasn't been able to get over the silence.

"It just shows the severity of things," said Pitts, a 41-year-old Brooklyn native who serves as the commissioner of Gersh Park, which hosts the annual NY Vs. NY tournament. "I went by the park the other day. It looks bare. ... Sometimes you've got kids trying to get into the basketball court with just a basketball, throwing it against the backboard."

On March 26 de Blasio ordered the rims at 80 playground basketball courts around the city removed because people who used them weren't adhering to warnings to avoid activities that involved people being in close proximity to one another.

New York state's current stay-at-home order is set to expire Friday as Phase 1 in a plan by the governor to begin gradually reopening the state. Three more phases are planned after that, though recreation activities aren't set to be addressed until the fourth and final phase.

It's left open the lingering possibility that city's hallowed outdoor courts, which are as much a part of New York's basketball culture as the Knicks and Madison Square Garden, could remain silenced into summer, threatening annual leagues and events.

No group may be feeling the interruption of that lifeblood like New York's youth, who not only utilize the basketball courts for recreation, but their parks for other after school activities.

Anthony Geathers grew up in Brooklyn and served two tours as a machine gunner in Afghanistan before returning home and rekindling his love for photography. He has spent the past five years chronicling every aspect of street ball from the games to sneaker trends.

Through his lens he sees a community in survival mode that's had one of its chief outlets taken away.

"From West 4th all the way to 34th Street until you hit Harlem it is completely empty," Geathers said. "It's a ghost town. If you wanted to film a movie right now, you could do it."

While opening the courts would be just a small step, Geathers believes the return of basketball could serve as a big lift to the spirits of the community.

"Kids are trying to be outside right now," he said. "People are still trying to deal with situation and survive the best way they can and still live."