An Italian basketball team, NPC Rieti, honored the late Kobe Bryant on Wednesday. The team lifted Kobe's jersey to the rafters in its home arena. Kobe's father, Joe, played in the very same arena with a pro team in the 1980s. (Video: Carina Looden via Storyful)

The late Kobe Bryant's No. 24 jersey was hoisted to the rafters of the arena in Italy where his father, Joe, played after he retired from the NBA and moved his family to Europe in the 1980s.

AMG Sebastiani Rieti folded in the 1990s. A new club, NPC Rieti, was formed in 2011 and plays at the same venue, the PalaSojourner, where Joe Bryant's team played.

The arena also honored Kobe during a pregame ceremony on Feb. 5 before NPC's game against Scafati in Italy's second tier. On the night, NPC Rieti fans held up a banner that read: "You began to play here and as an adult you made us dream. Our colors are with you in the sky."

Joe Bryant played for several more Italian teams, and one in France, before the family moved back stateside when Kobe was a teenager. By then, Kobe had become fluent in Italian as well as a lifelong AC Milan fan.

Kobe Bryant, his 13-year-old daughter Gianna, and seven other people were killed on Jan. 26 when the helicopter they were traveling in crashed into a hillside in Southern California. 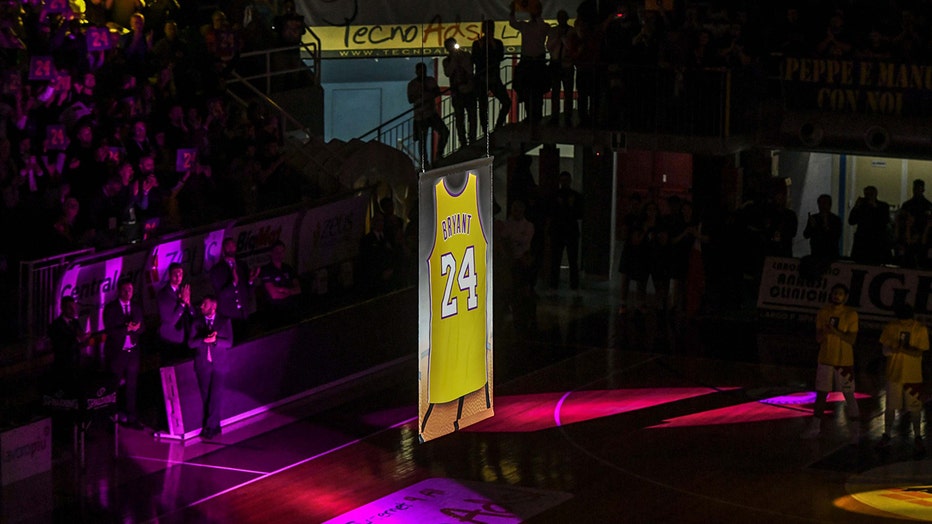 Kobe Bryant's jersey is lifted to the rafter in PalaSojourner, a sports arena in Rieti, Italy, Feb. 5, 2020. (Courtesy of NPC Rieti)