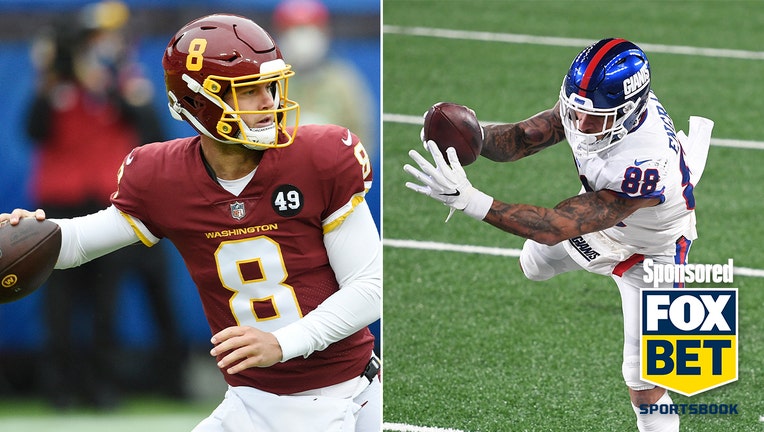 LEFT: Kyle Allen #8 of the Washington Football Team drops back to throw a pass in the first half against the Dallas Cowboys at FedExField on October 25, 2020 in Landover, Maryland. (Photo by Patrick McDermott/Getty Images) RIGHT: Evan Engram #88 of t

On the surface, there’s not a glimmer and pizzaz on a game between two teams who have a combined three wins halfway through the NFL season.

And yet, the NFC East can have subtle ways of sneaking up on you. And suddenly, the New York Giants and Washington Football Team are facing a make or break week in this decidedly weird NFL season when they meet up this Sunday (1 p.m., FOX) at FedEx Field in what almost amounts to an elimination game.

The Philadelphia Eagles lead the NFC East at 3-4-1, but face a brutal second half of the schedule that features non-division games against the Packers, Seahawks, Saints, Browns and Cardinals. So that could open the door for either Washington (2-5, but with one head to head win over the Eagles already) or New York (1-7), who could close ranks the next two weeks if they should beat Washington and Philadelphia.

There are 47 Custom Bets available at the FOXBet.com Sportsbook for you to choose upon, along with a BetBoost that has a six times payoff (+500) if Daniel Jones throws for 250 yards and the Giants win. Get your free FOX Bet app today.

This is the second meeting of the year between the two teams, with New York’s lone win of the season with a 20-19 win at MetLife Stadium on Oct. 18. That game ended when Ron Rivera’s attempt to go for a two point conversion and the win with 43 seconds left was unsuccessful. New York has won four straight and six out of the last eight games in the series.

Washington comes back after a bye week with a good feeling following a commanding 25-3 win over Dallas two weeks ago. In three division games this year, Washington’s defense has allowed only 40 points (13.4 points per game) while surrendering over 30 points per game in each of its other four games. Kyle Allen hasn’t wowed anyone since taking over for Dwayne Haskins as starting quarterback, but the running game has improved over the past few weeks in a style that Rivera loves to play.

Meanwhile, the Giants need to get Daniel Jones to protect the football better. Jones has thrown nine interceptions – part of a rash of turnovers (15) that the Giants have experienced this season. However, there’s been signs of improvement every week – a testament that Joe Judge’s formula may be getting in place.

One thing to keep in mind: both Devonta Freeman and Sterling Shepard were questionable on Thursday with injuries and could be unavailable for Sunday’s game.